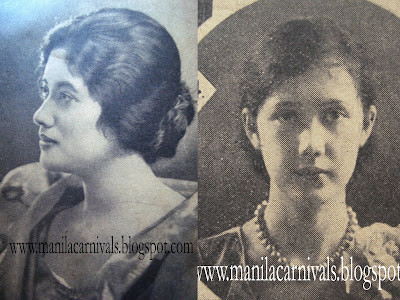 FACE-OFF: The battle royale for the queenship was contested by Maria Kalaw and Alicia de Santos, who, earlier in the year had reigned as the Queen of Mercy for the Anti-TB program of the government.

1931 will be remembered as one of the most competitive years for the candidates to the Fifth National Beauty Contest of the Manila Carnival. Maria Kalaw’s triumph was cleverly strategized by her supporters led by her own father, Teodoro, which caught her nearest rival, Alicia de Santos by surprise, giving no time for her sponsors to respond. 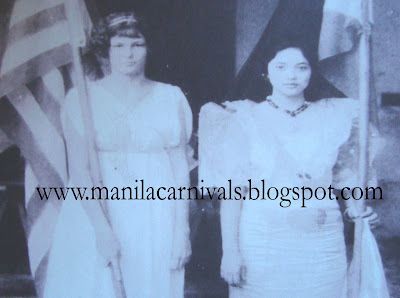 FILIPINAS MEETS U.S.A. Maria Kalaw in one of her school pageants wth her American beauty counterpart.

Of the 14 Miss Philippines candidates, Alicia de Santos, the candidate of La Opinion, and Maria Kalaw were the ones picked out by newspapers as having the biggest chances of winning the queenship. Based on material wealth, Alicia de Santos seemed to have the upper hand. She was the daughter of Jose Santos and Concepcion Cabarrus, both from affluent Manila families. She had two brothers, Alberto and Arturo. Alicia was also a relative--a cousin, to be exact--of the 1929 Queen, Pacita de los Reyes. 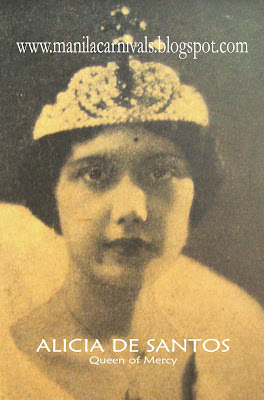 ANTI-TB QUEEN OF MERCY. Alicia de Santos as an advocacy queen for the Philippine anti-TB program.

Just like Maria, who had received several beauty citations in school, Alicia’s youthful mestiza beauty was also noticed early. As a student of Holy Ghost College, she was elected Queen of Mercy of the Anti-TB Society of the Philippines in 1929. This high profile event served as a campaign to raise funds for the eradication of tuberculosis—the no. 1 killer disease in the country. Her coronation was attended by the country’s Governor General Dwight Davis, well-known personalities of the American community and top Philippine officials led by Senate Pres. and Mrs. Sergio Osmeña and party. With her beauty in full bloom two years later, Alicia was ready to wear the crown of the country’s fifth Miss Philippines. 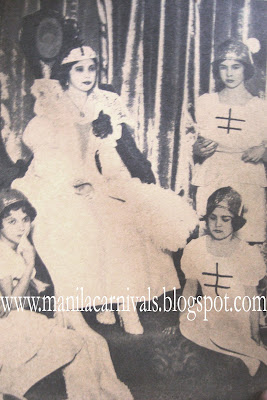 QUEEN OF MERCY, Alicia de Santos, at her high-profile coronation with her princesses, attended by high-ranking Philippine and U.S. government officials.

But it was clear that Teodoro Kalaw, had also become fascinated with the idea of having her daughter Maria, follow in her mother’s footsteps—a possibility that was also being pointed out by the national media. And so, he mapped out a gameplan to ensure the win of her daughter. To gather votes, he called on his Mason friends and their fraternal networks, asking them and their families to clip coupons, save and submit them for Maria. For days, he would stay in his office and telephone his connections, focusing his attention in getting his daughter elected.

On February 4, the partial results were announced on a regular basis:

With only 30 minutes left, Alicia seemed to enjoy an insurmountable lead. But fifteen minutes before the close of the voting, a group of men entered the hall to drop their stacks and stacks of coupons in favor of Maria Kalaw. A stream of votes for continued to pour for Maria such that at midnight, all her ballot boxes were stuffed to the brim. When the Carnival Director Arsenio Luz and his committee finished the tabulation by 1 a.m. , the results were immediately announced before a roaring crowd of 20,000 people. Miss Philippines of 1931 was Maria Kalaw, Maria I, Maria Primera.

The final tally was 2,516,300 votes for Maria, and 1,450,000 for Alicia. Maria’ lead was an unbelievable and unsurmountable 1 million votes. The official results were too much for the camp of Alicia to bear, who made accusations of ‘trickery”, referring to the Kalaws’ being townmates and close friends of Carnival Director Arsenio Luz. 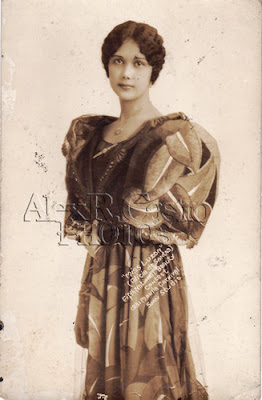 MISS LUZON, MISSED BEAUTY. Photos of Alicia de Santos as Miss Luzon had already been shot and circulated, only to be withdrawn when she decided not to accept the title. This is the reason why very few of her pictures are available to collectors today.

Immediately, Alicia de Santos—the First Princess or Miss Luzon, resigned from her post. But photographs of her identifying her as Miss Luzon had already been printed and released to the public. Lina Araullo took over the vacant position, while Luisa Rodriguez was elevated to the rank of Miss Visayas. American mestiza Louise Stevens was named Miss Mindanao.

Years later, Maria reaffirmed that winning the title was a matter not of popularity but of strategy and effort. “Contests and elections are decided in favor of the better organization, the harder working group. Votes are garnered, they are not cast”.

And what of the controversial Alicia who left the Carnival in a huff? She did not exactly disappear from the limelight. She went on to marry Octavio Maloles Sr., a lawyer. And further to show that the de Santos family had no love lost for the organizers of the Manila Carnival, Alicia’s brother, Dr. Arturo de Santos, agreed to become the King Consort of the 1932 queen, Emma Zamora.
Posted by Alex D.R. Castro at 3:22 PM