1929 MISS PHILIPPINES. The toast of the State University, Pacita de los Reyes, was one of the most accomplished queens of our Carnival years. She became a lawyer and placed in the Top Ten of bar topnotchers.

Much to the dismay of Carnival fans, no Manila Carnival was held in 1928 due to funding problems. The Carnival before proved to be too expensive to launch and stage what with the transport and billeting of candidates from the different provinces. Moreover, the newspaper balloting method—which was a major source of Carnival income--had been scrapped. 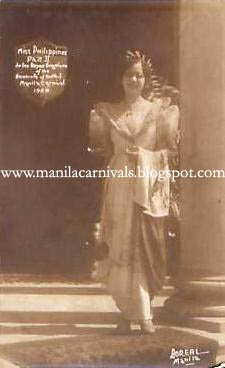 THE PRIDE OF THE STATE UNIVERSITY. Pacita, in one of her ternos especially designed by Pacita Longos, the leading couturier of her time.

When the Philippine Carnival Association convened to mount the 1929 Manila Carnival, the officials agreed to be more cost-efficient by using the student pool of colleges and universities to search for viable candidates. From these delegates, a Miss Philippines would be chosen, by paid balloting. 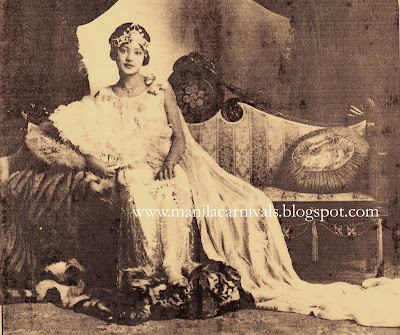 GRECIAN GODDESS. Pacita, in one of her official portraits, dressed in her coronation gown.

The schools were quick to cooperate—and the state university, no less, strategized a selection process for their official bet. The loveliest co-eds were invited to an afternoon tea by U.P. president, Rafael Palma, with the various deans in attendance, including Prof. Guillermo Tolentino of the C. Little did the coeds know that the affair was a preliminary judging of sorts. In the second meeting, called on one of the ladies, law student Pacita de los Reyes y Ongsiako, to inform her that she was the official candidate of the University of the to the Third National Beauty Contest. 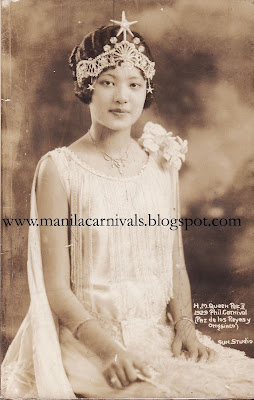 GOWNED AND CROWNED. Pacita in her coronation gown designed by famed couturier Pacita Longos. The bodice was trimmed with thousands of seed pearls.

Pacita was born in 1912, in Tondo, , the daughter of Manuel de los Reyes and Paz Ongsiako, members of ’s alta sociedad. ‘Ting’ was educated at the and finished her high school at the Holy Ghost College. Applying at the state university’s , she got the highest mark from among 115 applicants. She became a popular campus figure and was even named as a secretary of the Junior Philippine Senate, and elite group of top debaters, orators and honor students that included Ambrosio Padilla and Arturo Tolentino. 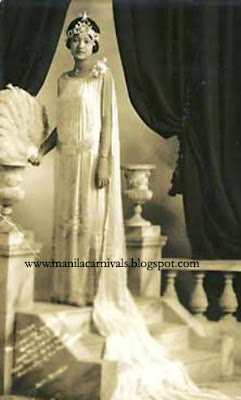 BEAUTY STANDING TALL. Pacita, at 5'6', was taller than most Filipinas in her time, and her physical beauty stood out during the Miss Philippines selection.

The 1929 Miss U.P. was quite a stunner, what with her beauty, intelligence and a tall 5’6” frame. These qualities were not lost with the public and the judges during the Miss Philippines finals. Pacita de los Reyes became our third Miss . Her victory was reported even in foreign publications, and Pacita’s father, who had live awhile in , learned of her triumph from a Parisian newspaper. 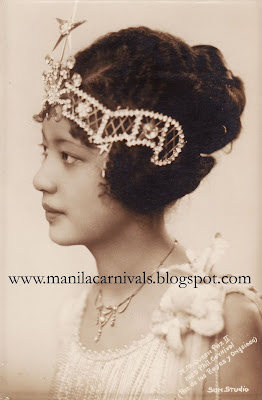 BEAUTY AND BRAINS. Pacita was a campus standout at the University of the Philippines-College of Law. 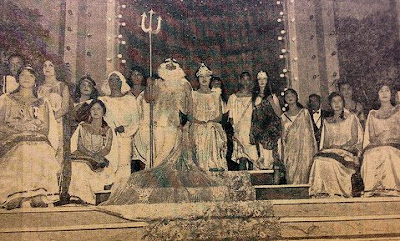 GRAND CORONATION NIGHT. "Pearl of the Orient Seas" was the the evening motif, and all the sea deities--headed by Neptune--came to participate in the crowning of Pacita.

Pacita found herself the toast of the 16-day Carnival festivities, gracing nightly affairs—Proclamation Night, Coronation Night, Miss Philippines Night, Comparsa Night and the U.P. Night-- with different assigned escorts. Most special to her was the U.P. Night where a “Pageant of Agriculture” play was written by Carlos P. Romulo to honor the school’s queen, who appeared as the Goddess of Agriculture. Her Coronation Night, in which she appeared as “Miss Pearl of the ”, had a Grecian theme. For this extraordinary evening, she wore a Pacita Longos gown, accented with pearls, lace and a long train from her shoulders. 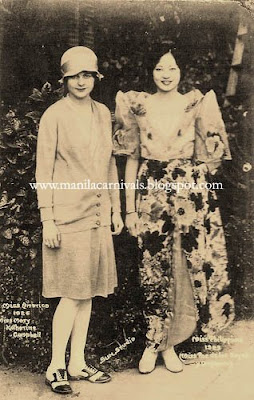 Another special moment was Pacita’s meeting of the 1926 Miss , Mary Campbell and actors Douglas Fairbanks Sr. and George O’Brien. For a 17 year old, Pacita’s reign as 1929 Miss must have been a magical, unforgettable experience. But all good things had to end, and when the Carnival was over, Pacita busied herself back with her studies. She earned a Bachelor of Laws, took the bar and placed seventh. Thus began her stellar professional law career. She also taught law subjects at the of , Holy Ghost College and . In between, she found time to finish Bachelor of Science in Diplomacy. 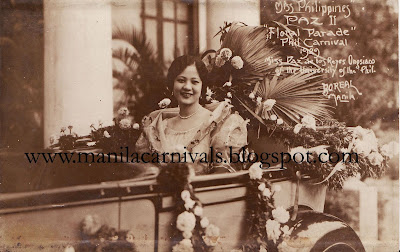 PACITA AT THE FLORAL PARADE. Paz participates in the traditional floral parade of the 1929 Manila Carnival.

She also was engaged in various socio-civic activities—from the CWL, Elks Cerebral Palsy to the Community Chest. She also became a president of U.P. Women Lawyers’ Circle (WILOCI) while serving as a director in their various family enterprises. She even supplemented her past Miss Philippines title by winning the “Most Popular Woman of the ” contest of the TVT publications in 1937. Her prize included all-expense paid trips to and . 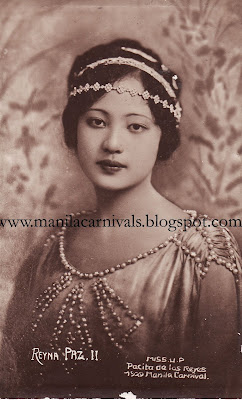 During the War, Pacita lived in the De Los Reyes ancestral home in and contributed to the guerrilla effort. When the Americans liberated the , she met Dr. Ralph Phillips of , a decorated American surgeon of the 37th Division. They were married in January 1953.

In 1957, Pacita launched her political career by running under Recto’s party for a senatorial position. Just a year later, the storybook romance of Phillips-de los Reyes came to an end when the couple agreed to separate amicably for reasons known only to them. Pacita continued practicing law in her office. The “all-time Filipino charmer, whose spell has endured for years”, died in 2004 and is interred at the Santuario de at Forbes Park, Makati.

Alex R. Castro, thank you so much ..for this timely post!!! (..i'm happy for this ..timely post. I just or hours ago talke to my mother from the Philippines to asked about the portia sorority..coz of my daughter..& she told me too about Tita Ting being Miss Philippines, 1929..then my daughter google it & saw ur post. Showed it to hubby..here i am commenting..THANK YOU SO MUCH..!!!

You're most welcome! I have you to thank for dropping by and visiting my site..

While writing a film review of Rosario (which I posted at sarimanok.ph), I came across your article. This has been very helpful in showing me what 1920s fashion was like in the Philippines, so I added a link to this article in my review.

Happy new year...and I hope you update more often. This is a lovely blog. Thanks so much for putting it up.

Many thanks for your comment. You know a year ago, I was actully contacted by someone (his name escapes me now) who told me he was doing research work for a movie tentatively titled "Rosario". He wanted to verify some facts about the contest. I didn't realize the film is done--and it's about the grandmother of <VP. I haven't seen the film though...

my thesis in college was an illustrated coffee table book on the evolution of the philippine national costume. I left my papers with the college registrar before heading back to davao and when i returned to pick up my work, the person i entrusted it too could not find it.

i was chatting with christian espiritu and she brought up the name of Pacita Longos whom i now remember as the person responsible for flattening the Maria Clara sleeves, initially transforming it to the butterfly sleeves that we use for Ternos today. would you have any details on this unsung heroine of philippine Costume?