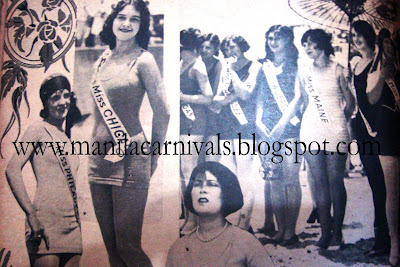 GALVESTON GIRLS. Beauties from around the world assemble at Galveston, Texas for the International Contest of Beauty and Pulchritude. The Philippines was said to have been invited to field a delegate.

A major uproar in the 1930 Manila Carnival was the so-called ‘bathing suit incident’, a behind-the-contest drama that threatened to cast a shadow on the results of the Miss Philippines search. The controversy lingered even after the contest was over, fanned by newspapers who published different versions of the incident. But the basic account was the same—the six Miss finalists were invited to a party in the house of Antonio Torres, president of the municipal board of . 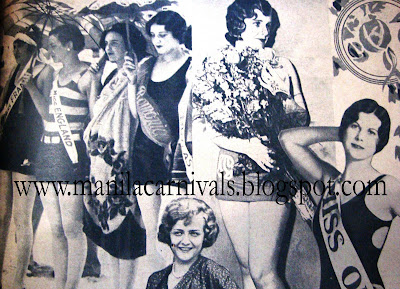 In the said affair, the panel of judges required the finalists to wear swimsuits and those who did not conform to this requirement automatically lost by default. The Philippine Carnival Association had apparently received an invitation from a contest organizer based in Galveston, Texas to field a delegate to the International Contest of Beauty and Pulchritude which had a mandatory swimsuit competition. 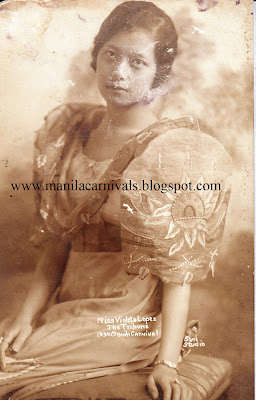 MODESTY ASIDE. The mandatory swimsuit segment of the competition triggered the controversy that arose in the 1930 Miss Philippines search. In the eye of the storm was Miss Violeta Lopez, who refused to wear a swimsuit--and was thus, as her supporters claim, eliminated from the royal race.

In the center of the storm was belle Violeta Lopez, a strong contender for the title and a candidate of The Tribune, who eventually dashed all hopes of winning when she flatly refused to wear a swim suit. For this act, she was both praised and twitted, and a flurry of claims and counterclaims were hurled from both sides—Violeta’s relatives and supporters and the officials and judges of the Carnival association.

One of the strongest statements of support came from the Catholic Women’s League headed by Mrs. Leonarda Limjap de Ubaldo, who, one can recall was the original 1908 queen-elect who gave up her crown. “In these days of the breakdown of this womanly virtue of modesty, your example will be both an inspiration to all and an incentive to ideals helpful to our nation”. 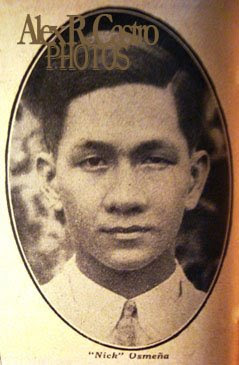 Nicasio “Nick” Osmeña, head of the Proclamation Night and the eldest son of President Sergio Osmeña, thought that there was much ado about nothing. “Stories praising Miss Lopez to the skies for refusing to put on a bathing suit are all but applesauce”, he said in a Herald interview, “Beside, she was already out of the running before the party (at Mr. Torres’ house)”. This prompted a cousin of Violeta, Luis J. Lopez to accost Nicasio at the Cine Ideal lobby where reports said he “attacked Nick, cutting his lips”, an incident that Osmeña denied.

Of the statement of Nick Osmeña, Miss Lopez retorted: “I do not know how Mr. Osmeña can pretend to have known what transpired in that party, when he was not even present”. She added that it was not true that she had wanted to wear a bathing suit but could not because she did not have one—she refused to put on one, period. “I never suspected that my refusal to wear a bathing suit would be so capitalized on by the newspapers…and now the facts are being twisted”.
Posted by Alex D.R. Castro at 1:20 AM