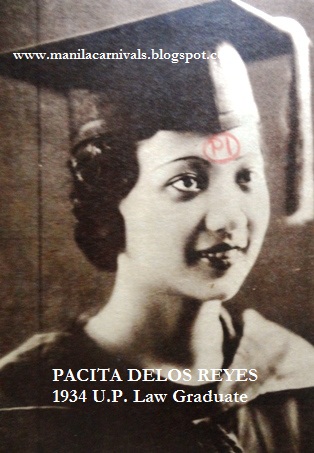 PACITA DE LOS REYES, Miss Philippines 1929, in her gradutaion toga as an honors graduate of the University of the Philippines, College of Law.

The statuesque scholar won the title and had an enjoyable year fulfilling the obligations as Miss Philippines. But school had always been a top priority, and she went right back to her law course after her reign was over, distinguishing herself as an outstanding debater, orator and member of the honor roll. Her contemporaries included Ambrosio Padilla and Arturo Tolentino.

Done with her law course, she took the bar and became one of the topnotchers in the 1934 Bar Exams, copping 7th place. On 10 November 1934, she was officially installed as member of the bar.

She had a brilliant career, and shared her legal mind by teaching subjects at U.P., Holy Ghost College and Far Eastern University. She unsuccessfully ran for the Senate in 1957 under Claro M. Recto’s party.
Posted by Alex D.R. Castro at 4:36 PM No comments:

A PRETTY GIRL IS LIKE A MELODY. Leonarda Francisco was a music student of St. Scholastica when she made a bid for the Miss Philippines 1934 crown. This lovely Nueva Ecijana became a well-known concert pianist later in life.

Leonarda Ocampo, was the first female graduate of Saint Scholastica College's Conservatory of Music. She was still a student when she was prevailed to run for the 1934 Manila Carnival search for Miss Philippines. She originally represented her province of Nueva Ecija having been born in Brgy. Bangad, Cabanatuan.The crown went to the Marilao beauty, Clarita Tan Kiang.

Leonarda became a well-known concert pianist. She passed on the musical genes to her descendants, which include the award-winning composer Louie Ocampo and Fr. Manoling Francisco S.J., composer of the well-known songs, "Hindi Kita Malilimutan" and "Tanging Yaman". A school that stands on a piece of land donated by the family in Cabanatuan City is named after this musical beauty.

Pacita Roxas and Evelina Kalaw with Ramon Katigbak and Teodoro Kalaw Jr., served as sponsors for the veil. Purita Kalaw was the maid-of-honor and Dr. Jose Reyes stood as Best Man.

The Katigbak couple went on to raise a brood of 4 that included: Marinela (Nela), Josefina (Pinkie), Purisima (Puri) and Norberto (+Butch).
Posted by Alex D.R. Castro at 5:51 PM 1 comment: