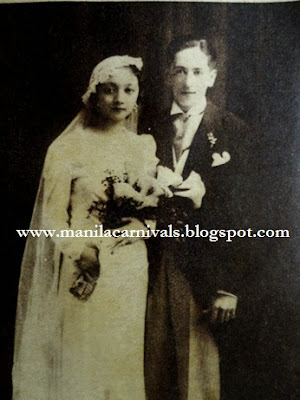 A EURASIAN MATCH. Rosalina Cispon Lim, Miss Luzon 1932, with her new husband Claude Martinez Devlin, at their 1934 wedding. Rosalina has Chinese-Filipina-Spanish-Portuguese bollod courtesy of her parents, while Claude is of British-Scottish-Filipino extract.

Miss Luzon of 1932, Rosalina Cispon Lim came from a multi-cultural background; his father a Chinese mestiza and her mother of Portuguese-Pangasinense descent. She went further by marrying half-British, half-Filipino Claude Devlin Martinez, just a year or so after her reign.
The couple briefly settled in London for some 15 years before returning to the Philippines. Rosalina and Claude had an only daughter, Tita Martinez Sicat, a Ph.D. holder and a U.P. professor.
Posted by Alex D.R. Castro at 7:04 PM No comments: 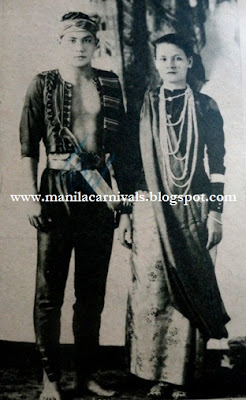 MUSE OF MINDANAO. Remedios Ferrer and her Consort, in authentic Muslim costumes at her coronation.

The Carnivals of Cebu replicated everything that the big carnival of Manila had, right down to the naming of the runners-up as Miss Luzon, Miss Visayas and Miss Mindanao, respectively. In 1934, the Miss Mindanao title was awarded to Remedios Ferrer.

Remedios Ferrer, Miss Mindanao of the 1934 Cebu Carnival and Fair. Miss Ferrer is well-known in Visayan society circles. She wears the typical Muslim costume in this photo from Graphic Magazine.
Posted by Alex D.R. Castro at 5:49 PM No comments: 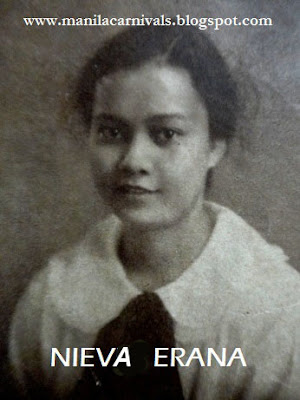 The future Miss Mindanao of 1939, Nieva Paz Eraña is seen in this photo taken from her Sta. Catalina High School yearbook, from where she graduated with the highest honors (Class Valedictorian) in 1933.

A year later, she enrolled at the Centro Escolar de Señoritas where she earned a reputation as a "brain and beauty" colegiala. No wonder then that in 1935, at the annual Centro Escolar Foundation Day, she was elected  as Queen of the Students’ Night held from Jan. 18-21, 1935.

Four years later, the fresh graduate was chosen as Miss Mindanano in the court of Miss Philippines 1939, Iluminada Tuason. She, however, relinquished her title and was replaced by Adela Planas.
Posted by Alex D.R. Castro at 6:10 PM No comments: 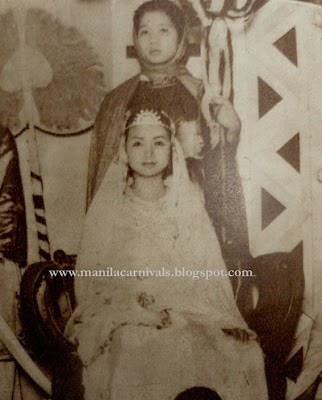 Cagayanons have been holding provincial carnivals in their province since 1926, and the events have been held usually in Aparri. Not to be outdone, the capital town of Tuguegarao started to mount its own petit fair, in the 1930s.

The royal elect in 1938, Her Majesty, Queen Herminia I (Herminia Aquino) reigned at the Tuguegarao Petit Carnival held from Aug. 10-20.

Her princesses included Rosalinda Olivas and Rosario Escalambre. The King Consort is Henry Kanaga, and engineer in the local office of the Bureau of Public Works.
Posted by Alex D.R. Castro at 4:52 PM No comments: