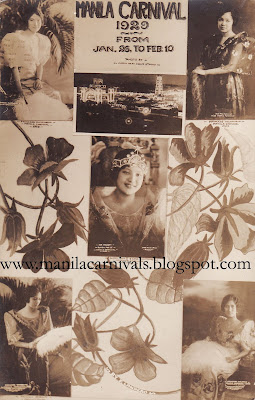 SUPREME COURT 1929. Queen Pacita is surrounded by her princesses--all campus beauties-- in this rare photo montage.

An innovation in the 1929 Miss Philippines, as briefly mentioned earlier, was the temporary scrapping of the regional winners who made up Miss Philippines’ royal entourage—Misses Luzon, Visayas and Mindanao. Instead, 4 princesses (damas) were elected to form the 1929 court of beauty, each of equal rank, and each bearing the title of their schools, instead of their province of origin.

Pacita’s closest rival was a very pretty mestiza with a distinguished lineage—Isabelita de los Reyes. She was one of the daughters of Don Isabelo de los Reyes, “Father of Philippine Socialism” and founder of the Philippine Independent Church (). Isabelita’s mother, Don Isabelo’s second wife, was a pure Spaniard from . At the homestretch, however, Isabelita withdrew from the contest due to the expressed disapproval of certain nuns from her school, leaving Pacita to win in a lopsided victory.

As it turned out, this objection was only true for the Miss Philippines title. The nuns feared that if Isabelita won, her studies would suffer. Isabelita amassed enough votes to be a runner-up, a position that had lesser obligations. Isabelita thus consented to be one of 4 maids of honor. In later years, Isabelita married Jose Barredo, the first Mr. and a noted tenor.

In the search of the fairest Escolarina to vie for the 1927 Miss title, two names stood out—Luisa Marasigan and Iluminada Perez of Batangas. Luisa eventually pipped Iluminada as the official school bet, but two years later, Iluminada carried the hopes of her college in the Third National Beauty Contest. She figured well and was elected as one of the princesses of the 1929 Miss .