Batangas beauties have done very well in the Manila Carnival Queen quest, starting with Julia Otero Arceo of Batangas, Batangas, who wore the crown proudly for her province in 1913. It took another ten years for another Batangueña to win back the title; in 1923, Catalina Castillo Apacible of Balayan town was elected Queen. Then, in the very first search for “Miss Philippines”, the lovely Anita Agoncillo Noble of Lemery, handpicked by the Batangas governor to compete in the 1st National Beauty Show of 1926, did not disappoint and emerged victorious in the tightly-fought finals.

Perhaps, Anita Noble’s winning qualities set a standard that was too high to be matched by her would-be successor, so much so that in the next year’s Carnival edition, the local carnival committee opted not to send a delegate to the 2nd National Beauty Show of 1927, to the consternation of many who had expected to see another strong candidate from the province. Besides, it was a tall order for another Batangas beauty to win the crown two years in a row.

Instead, the local provincial carnival committee decided to focus their energy on their search for the 1928 Miss Batangas. This time, an appropriate grand event was planned that will be the backdrop for the proclamation of the province’s royal queen—the 1928 Batangas Carnival. 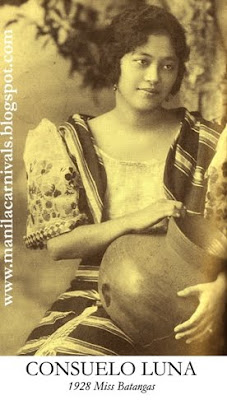 Sure enough, the search for Miss Batangas drew accomplished beauties from all over. There was Iluminada “Luming” Perez from Bolboc, who was already a popular Manila colegiala, and Consuelo Luna, the youngest daughter of Don Remigio Luna, an affluent businessman who had set up a lucrative pawn shop business in Batangas. 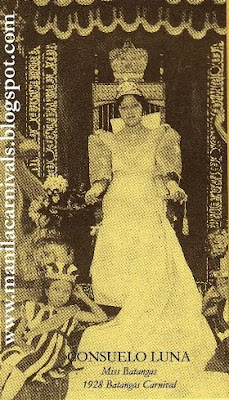 In the end, the title of Miss Batangas 1928 went to the fashionable Consuelo. But alas, that year, the 1928 Manila Carnival was scrapped for reasons still unclear, and with it, the national beauty pageant. Consuelo lost the opportunity to represent her province in the much-awaited beauty tilt. 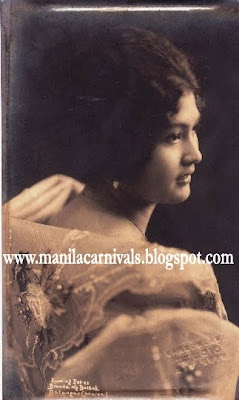 Luming Perez, the Diwata ng Bolboc, was luckier, because the year after, she was elected “Miss Centro Escolar de Señoritas” , the muse of the Manila school she went to. She became the school bet to the 1929 Miss Philippines search, which had attracted contestants from colleges, universities and other educational institutions. Iluminada eventually won a place in the court of Pacita de los Reyes, a law student of U.P., who snagged the Miss Philippines title. 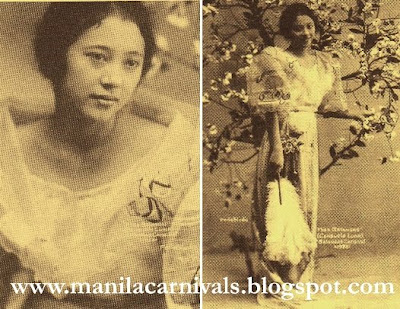 As for Consuelo Luna, she met and married a doctor ten years her senior, who had studied and taught at the University of the Philippines and Cambridge, England. As Mrs. Narciso Cordero, she settled in Quiapo, Manila where she and her husband started a family that consisted of two daughters, Gilda and Teresa. Gilda Cordero-Fernando is a respected figure in Philippine journalism today, an acclaimed and multi-awarded writer, editor, book publisher, artist and cultural advocate.

It would be another five years before another beauty of Batangas descent would wear the Miss Philippines sash. Half-Batangueña Maria Villanueva Kalaw, whose father Teodoro hails from Lipa, became Miss Philippines of 1931.
Posted by Alex D.R. Castro at 6:09 AM No comments: 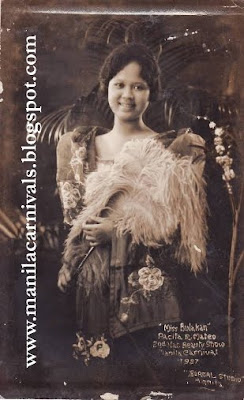 Miss Bulacan 1927, Pacita Mateo was born in Baliwag, to Pedro Mateo, the town’s municipal president and the legendary beauty, Josefa Lara Tiongson. Pacita’s mother was also known as Pepitang Baliwag or Pepitang Himala, and is said to be the subject of the kundiman, Jocelynang Baliwag, which was very popular during the time of the Revolution.


One of Pepita’s many suitors was the by labor activist–politician-writer Isabelo de los Reyes ( 1864-1938) whose daughter (one of 27 from three wives) , Isabel delos Reyes, became a Carnival princess in 1929, in the court of Pacita delos Reyes.


Little is known about Pacita’s participation in 1927 Carnival, won by Luisa Marasigan of Manila. Bulacan held its own provincial fair that year, highlighted by the province-wide search for Miss Bulacan, with all its municipalities fielding their own candidates. 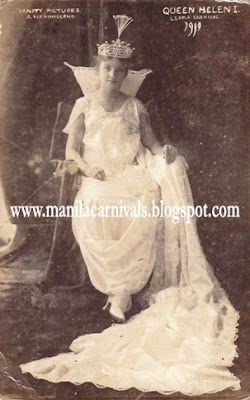 Of the Lerma Carnival of 1919, little is known of this obscure event except for two extant photos of the Lerma King & Queen by Vanity Pictures of Jose Nepomuceno. Jose Nepomuceno, a young photographer, made a living taking pictures of provincial carnival queens (he took the photo of Reina Nieves Gonzales of the 1919 Pangasinan Carnival, for instance) and would make a bigger name making films. The year these Lerma Carnival pictures came out, he was directing “Dalagang Bukid”, acknowledged as the first true Filipino film, adapted from Hermogenes Ilagan’s story and starring Atang de la Rama. 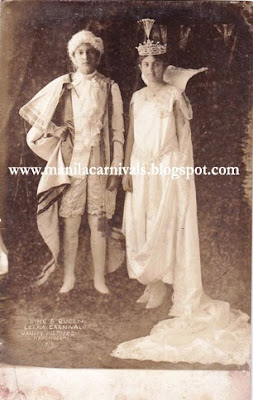 The Lerma Carnival Queen was a beautiful American mestiza by the name of Queen Helen I. The King was dressed in formal French court fashion complete with a powdered wig. The Lerma Carnival may have also been a corporate-sponsored event by Lerma Cabaret, a high society dance hall in Maypajo frequented by Americans and prominent Filipinos. The dance hall was a sponsor of the annual fair as seen from the house ad in this 1921 Manila Carnival souvenir program. 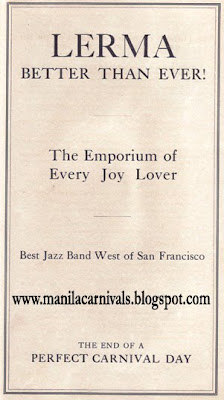 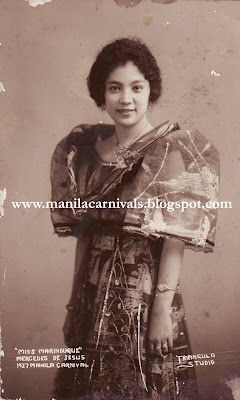 Mercedes Verdote de Jesus Joaquin (b. 24 Sept. 1911/d. 11 January 1966) was born on the Feast of Ntra. Snra. De la Merced to Gavina Verdote, the daughter of a Spaniard, and Mariano de Jesus, a landowner from Batangas. She was educated by Spanish nuns in Manila

At the age of 17, she was named to represent Marinduque in the 2nd National Beauty Contest in Manila, won by Luisa Marasigan of Manila. The year after, at age 18, she married Francisco G. Joaquin, and engineer with Kapampangan roots. They settled in Baguio after their wedding where Francisco worked in the gold mines of Itogon, Benguet. 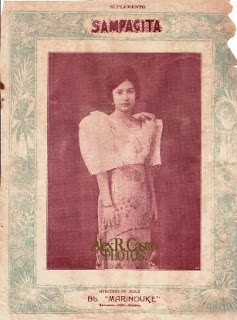 In the City of Pines, Francisco built for his family, the stately ‘Casa Blanca’ mansion in the 1930s. The Joaquins were to have 5 children: Francisco Jr. Sonny, Buddy, Patricia, Mary Anne,. They lost a premature baby at the height of the war, named Merceditas. For building bomb shelters that saved lives during the carpet bombing of Baguio, Francisco would be knighted by the Pope (Knight of St. Sylvester)

After the War, the couple brought their children back to Marinduque to wait for things to normalize, away from the devastation of Baguio and Manila. But once the worst was over, Mercedes and Joaquin went back to tending their family, running Hacienda Mercedes and Cresta Ola, a popular resort in La Union. She succumbed to cancer at age 55. 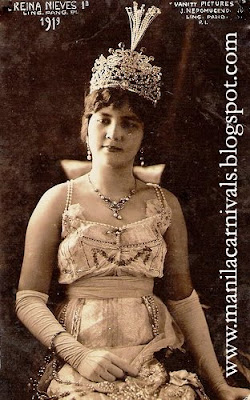 In 1973, this granddaughter, Maria Margarita Roxas Moran, captured the world’s most prestigious Miss Universe crown—our country’s 2nd – in a spectacular pageant held in Athens, Greece. She was also named Miss Photogenic in the same contest.
Posted by Alex D.R. Castro at 4:38 PM No comments: