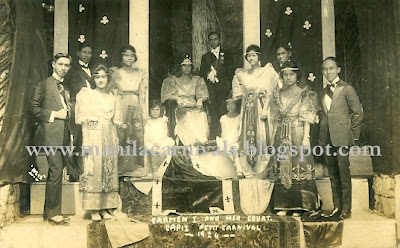 The 1924 Capiz Petit Carnival had a certain Carmen I as Queen. There was to be another Capiz Carnival the next year, held on December of 1925. The next year, Capiz sent its first representative to the 1st National Beauty Contest of the Manila Carnival, in the person of Rosario Picazo.
Posted by Alex D.R. Castro at 5:31 PM 1 comment: 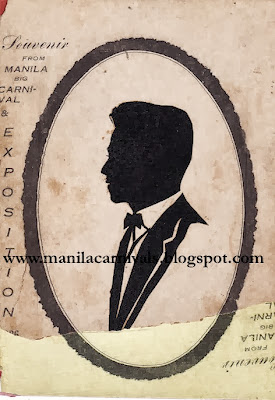 THE GREAT PROFILE.  A Manila Carnival silhouette portrait from 1936, a favorite souvenir from the national fair.

French Etienne de Silhouette, a chronic shadow cutter, gave his name to this simple art of portraiture, using a person's shadow as a template. It was a cheap way to capture one's likeness, making use of featureless profiles either traced from a shadow and then filled in with black ink or cut freestyle using black paper and a pair of scissors.

The Americans introduced this art form in the 20th century, but it did not catch on, only a few Filipinos mastered this craft (a certain artist named Marcelino practiced this art).

A few surviving examples come from the Manila Carnival area, which had booths that offered silhouette portraits as carnival souvenirs. This particular example is courtesy of the 1936 Manila Carnival.

The profile of a man in a tuxedo is cut from textured black paper and mounted on a special hardboard that had the text, "Souvenir from the Manila & Carnival Exposition 1936".

Silhouette souvenirs were also given away at the 1953 Philippine International Fair.
Posted by Alex D.R. Castro at 6:31 PM No comments: 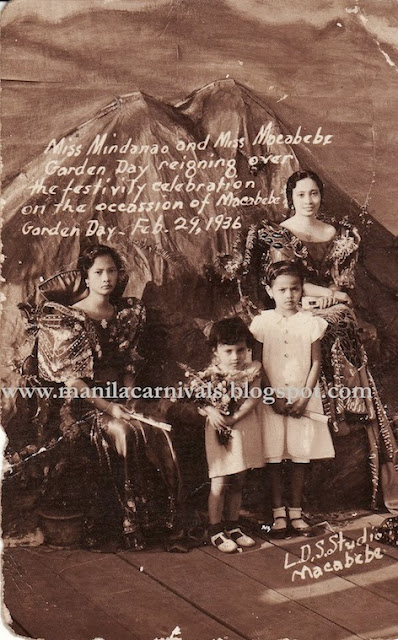 MACABEBELLES TWO. Miss Mindanao of 1936, Cleofe Balingit lends her royal presence to the Garden Day festivities in her town.

Balingit, backed by her newspaper sponsor, "Ing Catimawan", barged into the winning circle by placing 4th to Miss Philippines 1936, Mercedes Montilla. She was a popular beauty official of her town, welcoming VIPs to participating in local events like this one.

After her reign, she made a name for herself as a Red Cross volunteer, and undertook many socio-civic causes. 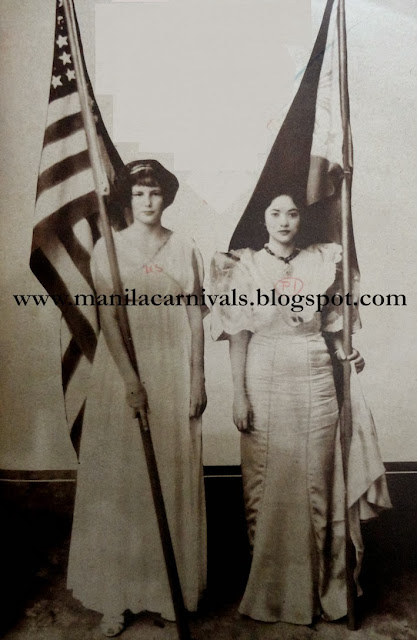 Miss Anne Alger (left) dressed as Miss Liberty presented the American flag to Gov. Gen. Frank Murphy during the Pan-Pacific Pageant. Alger is a descendant of two U.S. presidents, the Adamses.
Posted by Alex D.R. Castro at 5:26 PM No comments: