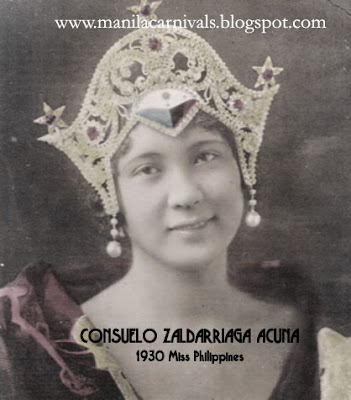 1930 MISS PHILIPPINES. The pride of Iloilo, Consuelo Acuna ("Monina") y Zaldarriaga, comes from a family of beauty titlists. Her official portrait shows her in a crown inspired by the Philippine flag and its emblems.

The 1930 Manila Carnival began on an auspicious note—a new decade of Flapper modernism in which Filipinos began to adapt more and more, the American way, especially in fashion. The selection of this year’s queen was marred by the controversial “bathing suit incident”, in which supposedly, the finalists were forced to wear bathing suits and parade before the judges, which created quite a furor among the girls, their families, school heads and other moral guardians. 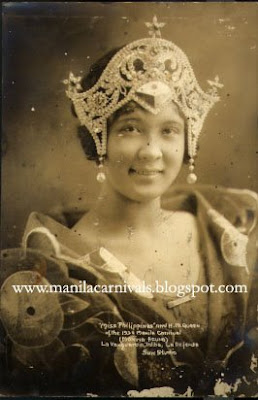 PRETTY LITTLE ONE. Monina was one of the more popular winners of the Miss Philippines search, in a year marred with controversy.

The eventual winner, 17 year old Ilongga beauty Consuelo Acuña y Zaldarriaga-- was unruffled over these allegations. After all, she had always been know for her even-temper, diplomacy and sweet disposition. Consuelo was nicknamed “Monina”—meaning “pretty, little one”, the youngest daughter of Antonio Aldeguer Acuña and Lutgarda Aldeguer Zaldarriaga, who were first cousins. Indeed, as a baby, Monina was doted on by her two elder brothers (Jose, Carlos) and three sisters (Isabel, Gloria, Luisa), moreso when she grew up as a high school beauty of Holy Ghost College. 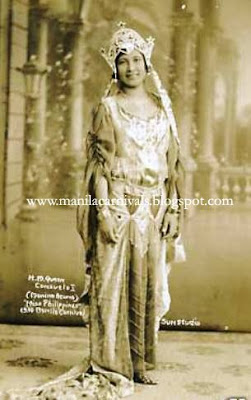 ARAB QUEEN. Dressed like an Arabic royalty, Monina went about her duties unflustered by the brouhaha brought aboiut by the bathing suit incident.

When the Philippine Carnival Association opened the search for the 1930 Miss Philippines, the task of selecting delegates to the national contest reverted back to the newspapers, as this proved to be the most lucrative way of raising funds. Consuelo was eagerly courted by newspapers willing to sponsor her candidacy —La Vanguardia, Taliba and La Defensa. One other change was the naming of the second, third and fourth placers as Miss Luzon, Miss Visayas and Miss Mindanao, irregardless of their province of origin. 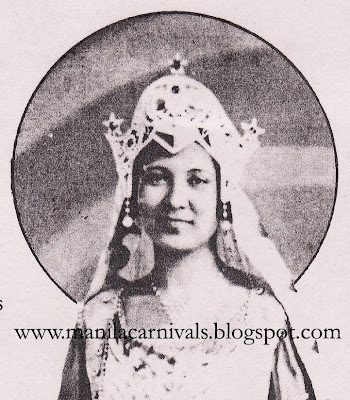 KAHIRUP'S BET. Monina was fully supported by the most prominent social club from the Visayas--the Kahirup Club--pouring in their financial resources to ensure her victory.

Adding support was the powerful Kahirup Club, a social club that counted moneyed Visayan elites among its members. Consuelo’s name was consistently on the judges’ list, although there were several other rivals just as beautiful and accomplished like Corazon Campos, Estrella Alvarez, Luz Aunario and fellow Visayan Luz Villaluna and Violeta Lopez. To make the 1930 Miss search more exciting, it was announced that the winner would represent the country to an international beauty contest in .

The panel of judges that included Mrs. Marina Yulo Vargas (wife of Jorge Vargas), Manuel Yriarte (National Museum Director), painters Fernando Amorsolo and Fabian de la Rosa convened several times to determine the winners. It was in the home of Manila Municipal Council president Manuel Torres that the final judging took place—and where the finalists were asked to don the controversial swim suits. Refusal to do so meant instant elimination, and this was how, talks spread, that favorite Violeta Lopez, got booted out of the winners’ circle.

OUT OF HER COSTUME..and into one of her native ball gowns. Monina cut a regal figure despite her very young age.

In the end, it was Monina—described by the papers as “so cute and childish”—who romped away with the 1930 Miss title, ahead of Estrella Alvarez (Miss Luzon), Luz Villaluna (Miss Visayas) and Rosario Ruiz Zorilla (Miss Mindanao) . Never mind if she was only 17, a year shy of the required age qualification, a technicality that the judges and the other contestants didn’t seem to mind.

Monina’s fabulous Coronation Night adopted an Arabian motif, dazzling in brilliance and attended by tens of thousands of carnival fans. A pageant play was presented, relating the story of a sultan who would relinquish his throne to his only daughter after picking out the worthiest prince to rule with her. Royals from around the world applied, but the princess chose a prince of her own race, a role essayed by Monina’s King Consort, Emilio Osmeña, a son of Sergio Osmeña.

A ROYAL GATHERING. Coronation night for Monina and her three princesses.

Monina breezed through her reign, participating in the traditional floral parade that once saw her car being mobbed by an enthusiastic crowd. She remained unruffled while her family watched in shock from the grandstand. Her smile never left her despite the long hours of obligatory socializing and partying. Some of the high points of her reign included attending the petit carnival of which was touted in the papers as “the homecoming of the Visayan Miss Philippines”. She also served as the welcome official in the victorious return from Europe of Filipina opera diva, Jovita Fuentes. 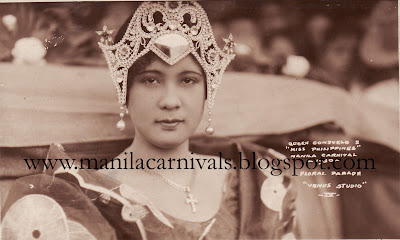 MONINA AT THE FLORAL PARADE. Monina was presented before an adoring crowd in the traditional floral car parade.

With the Carnival days over, Monina donned her college uniform once again and went back to school. In 1939, she married Herman German in a private wedding, a relationship that ended just a year later. She never remarried after that, even if she was pursued by suitors that once included a French foreign correspondent. Monina’s direct relatives carried on the tradition of beauty in the family: cousins Chita Zaldarriaga and Carmen Tuason were both former Miss of 1937 and 1958 respectively, while niece Maricar Zaldarriaga was the 1971 Miss Young . But no doubt, it was the beautiful Consuelo Acuña, Miss of the 1930 Manila Carnival, who started it all.

Consuelo Acuña Zaldarriaga (in Spain the father's surname comes first, followed by the mother's) was the daughter of Lutgarda Zaldarriaga Aldeguer and Antonio Acuña Aldeguer.

The latter was the brother of my great-grandmother Cecilia Acuña Aldeguer, who was born al Iloílo in 1875. She married in the cathedral of Manila, the Spanish Infantery captain Julián Rojí de Echenique in 1893.
Their children were: Irene, Isabel,Carmen, José and Cecilia.
The latter, my grandmother Cecilia Rojí Acuña was born in Iloílo in 1903. After the her birth the family moved to Spain.

Many thanks for the info update. Gracias!

What a good read. We are relatives of Miss Luzon, Estrella Alvarez =)

Hi itchywitch, thanks. I read somewhere that she disappeared and her disappearance was attributed to "kidnapping". Is that true?? What happened to her after her reign was over?