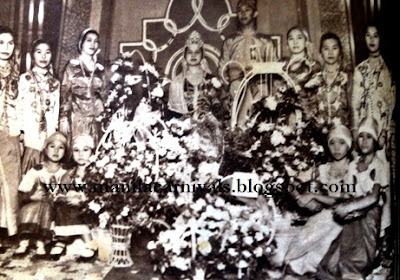 SEE YOU IN COURT. The official coronation picture of Miss Mindanao 1934, Consuleo Villamor, with her own retinue of beauties in regal Muslim costumes. She is escorted by her brother, Domiciano.

The tradition of having separate coronation nights for the princesses of Miss Philippines began in 1929, with the election of Pacita de los Reyes of U.P. Not only was the new Miss Philippines given her own Coronation Night, but there were also separate affairs for Miss Luzon, Miss Visayas and Miss Mindanao, which were no less fabulous.

The picture above shows the crowning moment of Abra beauty, Consuelo Villamor (b.1911/ d. 2009), who was Miss Mindanao in the court of 1934 Miss Philippines, Clarita Tan Kiang. True to the title she won, her whole court came in signature Muslim costumes. One of her attendants was Evelina Kalaw, sister of Miss Philippines 1931, Maria Kalaw. Consuelo is shown here with her Prince Consort, Domiciano Villamor, her brother.
Posted by Alex D.R. Castro at 1:07 AM No comments:

PANALO SI MANALO.  Elvira Manalo, Miss Palawan of 1927, was just the 3rd Palawan beauty to represent her province at the Manila Carnival search for Miss Philippines.

1924 was a very good year for the province of Palawan and its people, for it was in this year that a beautiful Palaweña from Cuyo, captured the prestigious Manila Carnival Queen crown. Trinidad Fernandez was also different from the winning beauties she succeeded, for she was no high society girl—she belonged to the working class, and her victory gave new meaning and purpose to the beauty title.

It was evident that hers was a tough act to follow; Trinidad was succeeded by her sister, Carmen Fernandez in 1926, but failed to advance in the finals. In 1927, another worthy candidate was found to represent the island province. Her name: Elvira Manalo of Puerto Princesa.

Like most Carnival beauties, Elvira came from a prominent political clan. Her father, Anastacio Manalo served as Governor of the province from 1922-1925. Anastacio was a prolific builder; he constructed the present wharf of the capital city and, under his tenure, northern and southern roads leading to Iwahig Penal Colony were laid out. The Capitol Building near the wharf was also attributed to his administration.

Elvira, however, failed to take home the crown that her compatriot had won two years before; an Escolarina co-ed representing Manila—Luisa Marasigan—emerged victorious. Thus, Trinidad Fernandez remains the only Palaweña winner in the 31-year history of the Carnival Queen contest.