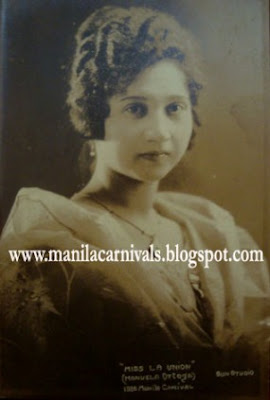 AY, MANUELA. The first Miss La Union, Manuela Lacsamana Ortega, came from a family of politicians who continue to rule over La Union to this day.

The Ortegas comes from a powerful political family in La Union that has been involved in politics of the province since 1901 and which continues to this day. The patriarch was the Cebu-born Don Joaquin J. Ortega, who, at age 31 was appointed as the first civilian governor of La Union by Gov. Gen. William H. Taft.

The next year, he became the first elected provincial governor. His marriage to Francisca Lacsamana of Bangar produced 14 children (one died in infancy) and among them was the lovely Manuela L. Ortega, the first Miss La Union.

Like her seven sisters (Antonia, Vicenta, Ramona, Juanita, Joaquina, Concepcion, and Maria), Manuela was raised and educated in the province, learning domestic arts and housekeeping duties as was the custom in those days. All these changed when she was handpicked to be the provincial bet to the Manila Carnival search for Miss Philippines. With her family’s affluence and clout to back her, she went to the big city of Manila to compete in the first ever National Beauty Contest for that was won by Anita Noble of Batangas.

Later in life, Manuela settled down, married a businessman from Isabela and became Mrs. Quiroz. Manuela’s five brothers—Jose, Luis, Francisco, Joaquin and Evaristo—all finished Law and all served in different capacities as judges, councilors, mayors, provincial board member, governors, congressmen, Speaker pro-tempore, thus continuing a family tradition in public service that has lasted for over a century.
Posted by Alex D.R. Castro at 5:02 PM 1 comment: