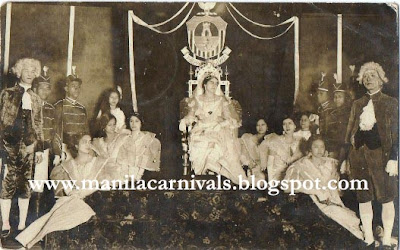 The very first Cebu Carnival was held over the Christmas holidays of 1913. It was organized by Jose Nolasco who tried to replicate the same successful elements of the national carnival--even going to the extent of hiring the same company--Churchill and Tait--that provided lavish program entertainment--from circus acts, acrobatics and exciting carnival rides. There were also decorated booths and pavilions that showcased Cebu's progress in areas of commerce, agriculture and various industries. The pioneering provincial event was staged just 5 years after the first Manila Carnival, and was held at the Fuente Osmena. The coronation of Queen Enriqueta Aldanese de Lasso de Vega culminated the festivities. The first Carnival Queen of Cebu eventually became a national royalty, reigning as the Queen of the 1918 Manila Carnival.
Posted by Alex D.R. Castro at 4:56 PM No comments: 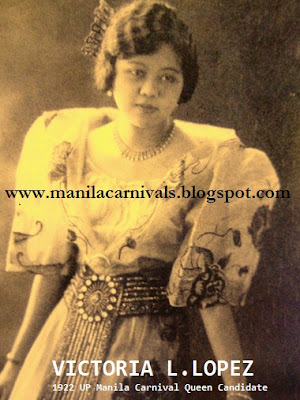 VICTORY FOR VICTORIA! Candidate to the Manila Carnival 1922, Victoria was one of the long list of Ilongga beauties that competed for the beauty cup, which included Pura Villanueva, Lilia Lopez, Consuelo Acuna, among others.

In 1922, University of the Philippines took pride in announcing their chosen contestant to the annual carnival. She was no other than Victoria Lopez y Ledesma, from Iloilo.

The Ilongga beauty, born 6 March 1907, was born to parents, hacendero Eusebio Lopez and Ana Ledesma, both from powerful and affluent families from Jaro. Victoria went to Assumption Convent for her education and was active in school plays, music and dance recitals. She was also a popular member of the exclusive Smiles Club and the Kahirup social club.

She married Atty. Salvador Araneta on 14 August 1927, the son of Gregorio Araneta and Carmen Zaragosa. Salvador was known for being a “relentless advocate for the homeless, the unemployed and for the industrialization of the Philippines”.

The couple made their home in Mandaluyong, where they built the majestic Villa Victoneta, designed by 3 architects –Juan Arellano, Domingo Lerma and Andres Luna de San Pedro. It was the site of many grand events, drawing dignitaries like Pres. Manuel L. Quezon, Dennis Cardinal Dougherty, High Commissioner Paul V. McNnutt, Apostolic Delegate Guglielmo Piani, among others.

The couple had 4 children: Carminia, Ana Marie, Maria Lina, Maria Victoria and Regina. Victoria shared her husband’s deep involvement involved in advocacies and socio-civic causes. She set up a school for children living around the Mandaluyong area. She was the leading light of White Cross, a project which took care of children of parents afflicted with the dreaded TB. Her husband was wanted by Marcos during the Martial Law years, but by then, they had flown to America and settled in Canada, with the help of the Vatican. Victoria passed away of cancer on 16 February 1988.
Posted by Alex D.R. Castro at 4:48 PM No comments: 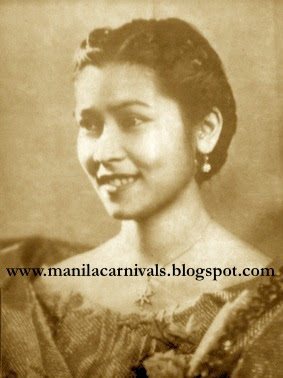 The 1939 Philippine Exposition was to be our last national fair, and, as a gesture of final support, the esteemed Graphic's Magazine fielded the accomplished Lydia Tinzon as its official candidate to the 1939 search for Miss Philippines.

Miss Tinzon, from Canlubang, Laguna was a co-ed of Far Eastern University at the time of the contest, and was one of the beauteous muses of the university ROTC. The last Miss Philippines title, however, went to Iluminada Tuason.
Posted by Alex D.R. Castro at 8:12 PM No comments: