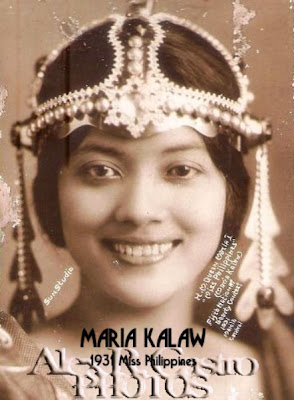 1931 QUEEN OF THE MANILA CARNIVAL. Maria Villanueva Kalaw will be remembered in the Carnival history as the daughter of the first Queen of the Orient of the Manila Carnival, the accomplished writer, feminist and businesswoman Pura Villanueva.

Maria Kalaw y Villanueva entered the Fifth National Beauty Contest of the 1931 Manila Carnival as a first second-generation candidate who received much press attention. After all, she was the daughter of the first Carnival queen (Pura Villanueva of Iloilo) and a Manila intellectual (Teodoro Kalaw of Batangas). When she won, she became the first second-generation Queen in Carnival history, in a last-minute, but well deserved victory. 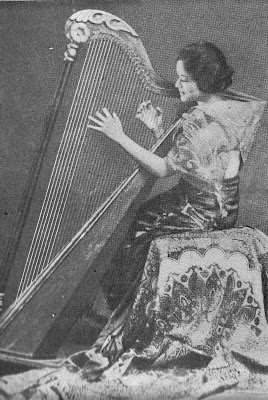 MARIA AS A YOUNG WOMAN IN 1929. In her teens, Maria was already following in the footsteps of her mother, dabbling in writing for national magazines such as Graphic.

At the start, Maria had everything going for her. When her parents were approached by the Carnival organizers to discuss the possibility of their daughter Maria joining the contest, they gave their permission, surprising everyone, including Maria. After all, Pura had not supported her daughter’s candidacy in one beauty tilt sponsored by the Philippine Women’s College, because she was against the fund raising aspect of the contest. On the other hand, it was unthinkable for Teodoro, then director of the National Library, to indulge in vote solicitation for her daughter; he would rather write than socialize.

QUEEN MARIA I. In one of her official portraits as the Queen of the 1931 Manila Carnival.

Based on merits alone, Maria, too, was a stand-out. She was born on 14 February 1911 in Manila, the eldest in a brood of 4, that included brother Teddy and sisters Purita and Evelina. Maria’s first Carnival experience was in 1916, when she and her siblings joined—and won the Costume Contest, dressed as Oriental royalties. The children lived a charmed life in their San Marcelino home, where they were sent to the best schools and even traveled abroad with their parents. For her grade school, she attended St. Scholastica, then finished high school at the Philippine Women’s College. 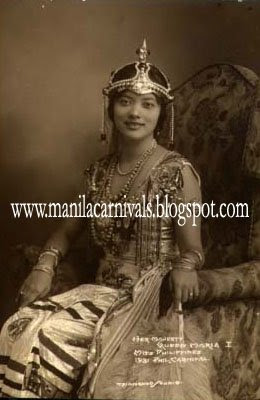 QUEEN OF ARABY. Maria Kalaw came to her Coronation Night in an exotic Arabic costume and a gem-studded helmet-type crown that elicited mixed reactions from the press.

For college, she chose to take up philosophy and letters at the University of the Philippines. Like her father, she cultivated a love for journalism and literature, and some of her writings saw print in national magazines such as Graphic and The Literary Apprentice, the school’s premiere magazine. She was involved in almost every major school organization—as a vice president of the UP Women’s Club, member of the Student Council and the UP Writer’s Club. 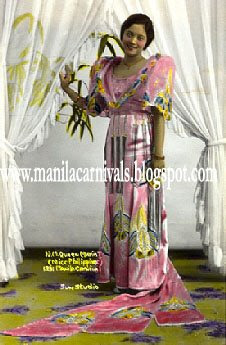 REINA MARIA PRIMERA. Maria, in full coronation regalia. The U.P. beauty went to school as usual the day after she was elected Miss Philippines.

Of course, Maria’s beauty went unnoticed. She became the muse of the College of Law’s Bachelor Club and a regimental sponsor twice. A reporter from The Independent magazine wrote that “Maria’s beauty was dazzling, her friendliness in full bloom. Nobility is in her gestures and attitude..she seems born to be an Oriental empress”. 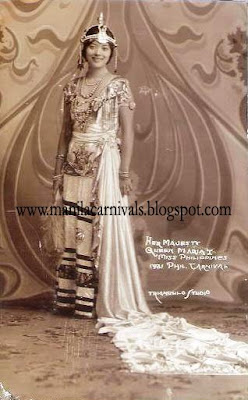 Entering the national beauty competition, the 19 year-old coed was supported by The Tribune, Philippine Herald, Batikuling and the Philippine Free Press. The rest of the delegates included Lina Araullo, Lourdes Rodriguez, Louise Stevens, Pilar Alberto, Fe Alberto, Rita Panares, Pacita Reyes, Emilia Diago, Celia Acosta, Remedios Manlunas, Gloria Manlunas and Alicia de Santos. Winning depended on getting as many newspaper coupons as possible, published in all the leading dailies and publications of the day. The voting period lasted for 8 weeks, and the tabulation of votes began on 4 February 1941. 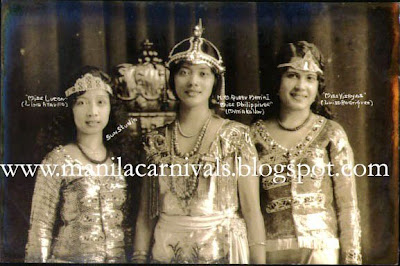 MARIA'S COURT OF HONOR. Lina Araullo (elevated to Miss Luzon) and Lourdes Rodriguez (Miss Visayas). Miss Mindanao was yet to be named because of the controversial resignation of Alicia de Santos.

Maria projected an attitude of casual detachment from the day she was named as an official candidate. She attended her classes at U.P. as usual. But then, she won in the most dramatic fashion after a see-saw battle with Alicia de Santos. Her father had been quietly mobilizing his Masonic fraternity brothers to collect and clip newspaper coupons. At the last minute, he had voters cast their ballots, overtaking de Santos, the erstwhile leader, and winning the crown for his daughter Maria with a lead of over a million votes. Alicia de Santos was relegated to 2nd place (Miss Luzon), followed by Lina Araullo (Miss Visayas) and Luisa Rodriguez (Miss Mindanao). With de Santos’s resignation, Araullo and Rodriguez were promoted, with Louise Stevens joining the entourage as Miss Mindanao. 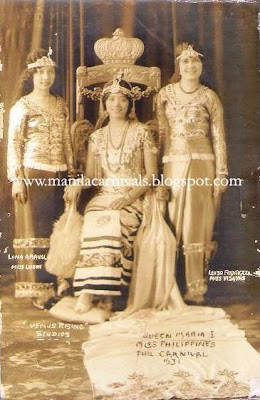 AT HER MAJESTY'S SERVICE. Miss Luzon and Miss Visayas flank their beautiful queen, Maria Kalaw, ready to do her bidding in this photo postacrd.

Maria’s coronation theme was Hindu-Malayan, and for her special moment, she was escorted by her brother Teddy Kalaw, who came dressed as an Indian warrior prince. Maria looked exotic in her white silken gown that had bands of gold all around her skirt. Over her neckline was a gold-embroidered collar, trimmed with tassels. She wore 3 strands of pearls, an armlet of diamonds and a helmet-shaped crown with two dangling pendants and a sunburst gem. For her other appearances in the nightly balls, she wore Filipiniana creations made by the famed couturier, Pacita Longos.

The next day, the new Queen nonchalantly went back to school in her regular white uniform, taking pains to look no different from her classmates. Maria, it seemed, was clearly more into her studies than her fleeting duties as a Carnival royal. Sure enough, after her reign, she went back to school and earned a Barbour scholarship in Ann Arbor, Michigan, where she finished her Master of Arts degree in 1933. 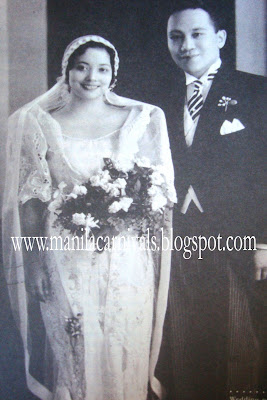 MARIA'S MATRIMONY. Maria Kalaw at her wedding to Dr. Jose Katigbak, a relative from Lipa, Batangas.

A year after her return, she married a fellow Lipeño, Dr. Jose (Pepito) Katigbak, who was also a relative. The Katigbaks came from a clan of political leaders in Lipa, Batangas. Maria and Jose raised four children: Marinela (Nela), Josefina (Pinkie), Purisima (Puri) and Norberto (+Butch). Maria, when not tending her family, was also active in socio-civic movements, like the Girl Scout of the Philippines. In 1948, she was drafted into the Central Committee and later became the national president for 8 years. 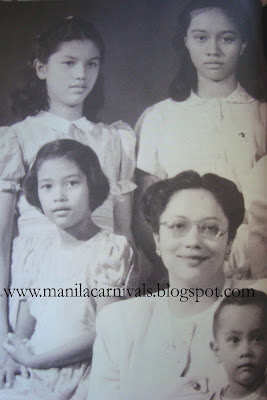 BORN TO A ROYAL BREED. Marinela, Josefina, Purisima and Norberto--children of Maria Kalaw and Jose Katigbak.

In 1961, running under the Liberal Party, Maria won a seat in the Senate, jumpstarting her political career. She broke new barriers by going to Beijing and joining a Vietnam Mission. In between her busy schedules, she earned a Ph.D and wrote his parents’ biographies: Few There were (like my Father) in 1974, and Legacy: The Life and Times of Pura Villanueva Kalaw. 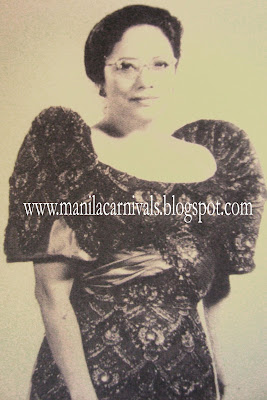 Failing to get re-elected, Maria went back to her writing and became a ‘Checkpoint’ columnist for Manila Times. In 1981, then Pres. Ferdinand Marcos named her as the Chairman of the Board of Review for Motion Pictures and Television and earned a reputation as a tough censor. After the untimely death of her only son Butch, Maria suffered from bouts of depression. Also a diabetic, Maria Kalaw-Katigbak was felled by a series of strokes on 10 December 1992. Her beloved husband, Pepito followed her two years after.

Hello sir Alex I copy pasted your blog on my blog oN Maria Pura Garcia Villanueva and Purita Kalaw Y Villanueva. as historical background and inspiration for our Mutya ng Pilipinas Candidate of Iloilo IS ANOTHER VILLANUEVA IN THE PERSON OF fROILENE VILLANUEVA. I am rallying in behalf of the ilonggo community here to support her and hoping she will bring home the crown. Its been a while since we have an Ilongga winning a National Title and as well as international one. The last one we had was MS.PIJUAN...ITWAS A LONGLONG TIME AGO IN THE 70'S. Thanks Iam DEO ANTONIO D.LLAMAS With your blog Ihave also learned that there are quite many Llamas Beauty Queens as well. Especially Virginia Llamas Romulo and Rosario Llamas of Cebu. Thanks for this blog you have given a lot of information on the beauty history of our colorful Beauty pageants and the lives of our Beauty Queens

You're welcome, Deo. The 1930 Miss Philippines, Monina Acuna was also from Iloilo. I think Aurora McKenny Pijuan, Miss International 1970, cites Bacolod as her home province. In any case, good luck to your candidate!

I'm just wondering. How come their pics in the olden times have frown faces and they hardly smile. This is the first time I saw someone who actually smile in most of the picture. :)

I'm just wondering. How come their pics in the olden times have frown faces and they hardly smile? This is the first time I saw someone who actually smile in most of the picture. :)

In those early days of photography, the subject had to sit still for a long time, so I guess it was difficult to hold that smile for longer than 5 minutes, lest it turns up as a smudgy smile on the photo.

Hello, Alex Castro,
I am Sandra Castro-Baker. I have written on Philippine textiles/costume with Ayala Museum and Ateneo Press. I have seen your book and I love your blog photos! I was wondering if you would allow me to show your photo of Miss Laconico (Manila Carnival) on my Facebook page to talk about the train of the 1920's terno. I will cite your blog in my post as the source.

I hope you are doing well these days.