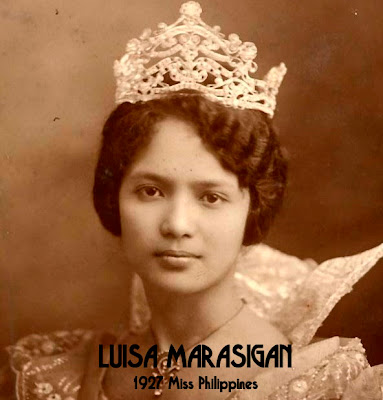 1927 MISS PHILIPPINES. The 2nd Miss Philippines of the Manila Carnival was an Escolarina, Luisa Fernandez Marasigan. Although she represented Manila in the national contest, many still refer to her as "Miss Philippines from Gumaca, Tayabas", where she hailed from.

So well-received was the 1st National Beauty Contest that the next year, it became the main feature of the 1927 Manila Carnival. The same procedure was employed in the search for Miss —from among provincial beauties, the fairest of the fair would be selected to rule over the Carnival. In this year’s edition, leading high schools, colleges and universities were tapped to participate. Among the schools invited was the Centro Escolar de Señoritas.

THE GRADUATE. Luisa as a young high school graduate of the Centro Escolar. She became a teacher in her native Tayabas after her reign.

Under the directorship of Librada Avelino, a search was conducted for the loveliest Escolarina. Topping the list was a sophomore from Tayabas, Luisa Fernandez Marasigan. Lucing was the daughter of Francisco Marasigan of Gumaca and Andrea Fernandez of Macalelon. Andrea was of Spanish ancestry, and the 8 Marasigan children all had mestiza features, but it was Luisa who seemed to have inherited the best of the Caucasian-Oriental blend. Her most attractive features were her dreamy eyes—“mapungay”—which gave her a soulful kind of beauty. 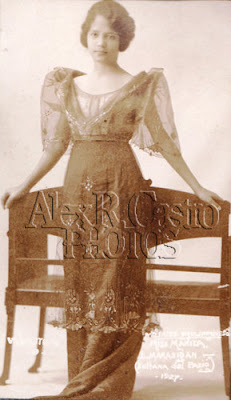 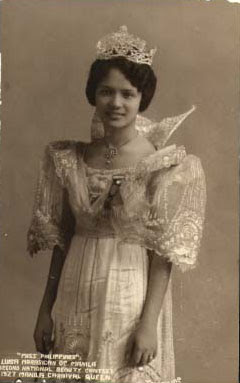 CROWNED AND CAPED. Luisa Marasigan won the Miss Manila crown and the title Sultana de Pasig in the reliminary contest leading to the national tilt.
As expected, Lucing topped the contest ahead of Salud and Pacita Legarda. She was crowned as “Sultana de Pasig”, but donned the title of Miss Manila in the national competition. It was an exciting moment for the 16 year old Lucing when she joined 30+ other beautiful girls from different parts of the country for the pageant. There were representatives from as far as the , Abra, Lanao and Sulu. Judging the proceedings were leading figures in the arts and culture like sculptor Guillermo Tolentino and painter Fernando Amorsolo. 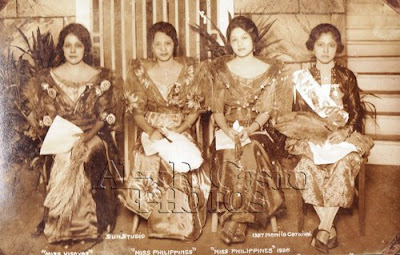 QUEENS, PAST AND PRESENT. 1927 Queen Luisa Marasigan with outgoing 1926 Queen Anita Noble, Flanking them are Miss Visayas (Lourdes Rodriguez) and Miss Mindanao (Nora Maulana).
Unlike last year, the final decision was made with ease and speed; the judges were almost unanimous in their choice for Miss —no other than Luisa Marasigan. Comprising her court was Iluminada Laurel of Laguna (Miss Luzon), Lourdes Rodriguez of Cebu (Miss Visayas) and Nora Maulana of Sulu (Miss Mindanao). Standing as her dashing King Consort was Guillermo Jose, a godson of the Centro Escolar director. Guillermo’s photo was among the scores sent by the Bachelor’s Club to Luisa so she could personally select her consort. He later married the candidate from Rizal, Encarnacion Ibañez Johnson. 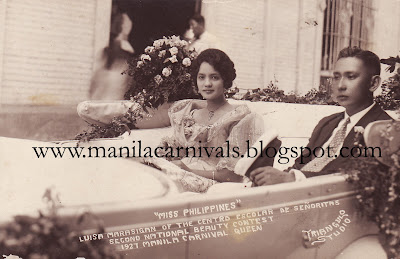 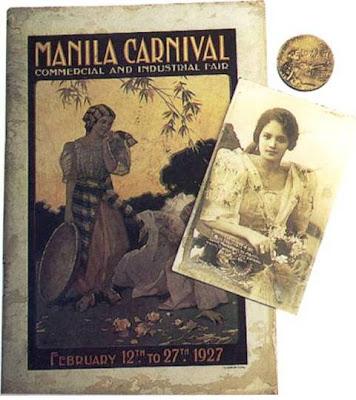 1927 CARNIVAL MEMORABILIA. A rare 1927 program booklet of the Carnival and a photo of Miss Philippines.
The young Luisa proved to be one of the more popular Miss ever, and her appearance at the floral parade attracted large crowds. Her grateful school feted her with a series of musical tributes in which she even gave a very inspiring speech about the role of Filipinas in a country on the brink of a great change. In addressing her school, Queen Luisa said in reflection: "To my mind, the national beauty contest which was held for the second time in the Philippines should not only be an occasion for the outburst of admiration for physical beauty. It should be also an occasion for the cultivation of a higher form of beauty--the spiritual beauty..when the representatives of the various provinces vie with each other not for their personal aggrandizement but for the honor of the country we all love.." 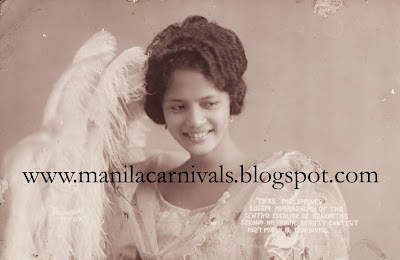 I'M A FAN. Luisa Marasigan was definitely one of the most beautiful winners of the Miss Philippines Contest, possessing a dreamy kind of facial beauty, attractive even by today's standards.
But once the lights on the 1927 Carnival went out, Luisa went back to her high school studies, graduating in 1929. She went back to Gumaca to start a teaching career while serving her parish church with zeal. She also renewed acquaintance with her childhood friend, Sisenando Barretto, a U.P engineering graduate. Their marriage had to wait as Sisenando had to take further studies in the and was further delayed by his father’s death. It was only in 26 October 1940 that the Luisa—then already 24 years old—and Sisenando got married in Gumaca. 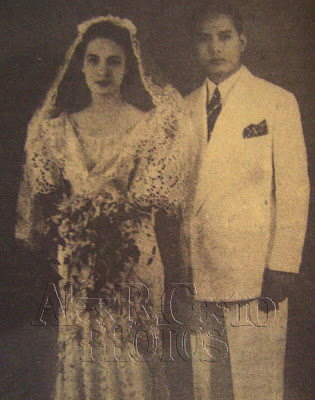 SWEETHEARTS FOREVER. Wedding day picture of Luisa and Sisenando. They were long-time acquaintances, but their love blossomed only when they met again as adults.
As Sisenando found a job in , the Marasigans settled on Calle Cataluña in Sampaloc. The couple had 4 children, 2 girls and 2 boys, who went on to become successful professionals: , (both graduates), Roberto ( a doctor) and Sisenando Jr. (Economics graduate of Ateneo). In 1950, the Marasigans moved to . 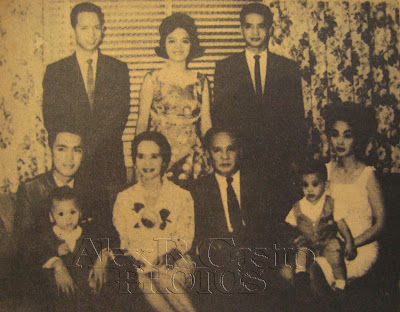 Luisa’s beloved Sisenando died unexpectedly in 1968, while en route to a conference in Cagayan de Oro. Even as the children got married, relocated and, in the case of Roberto, migrated abroad, the dreamy-eyed Luisa Marasigan lived out the rest of her days in Manila, the city she ably represented inthe 1927 Manila Carnival, and where she found fame as Miss Philippines.
Posted by Alex D.R. Castro at 11:55 PM

Bobby, Is that you in the picture? Looks so young. Jun Aristorenas.

wonderful tribute to a beautiful family .
Thanks for sharing it with all of us.

Edmund, thank you for identifying the subjects in the photos. So, you are the grandson? I am happy ti meet you here. I hope the biographical sketch of your lovely grandma is accurate.

Many thanks for dropping by!

I believe I have a picture of your beautiful lola--she's on the list of 1927 candidates featured in one blog entry here. Pictures of Miss Marinduque 1927 are hard to come by. Would you have her biographical sketch?

Thanks for posting the pictures of Luisa Fernandez Marasigan Barreto. My father, Ramon, is her brother. So glad to see the photos of our Tia Lusing.
Many thanks and more power.

Just curious how the Barrettos featured here are connected with Manolita Barretto, another Carnival Queen or the Manila, Zambales and Laguna Barrettos?

Thanks, Cherry. I hope you can do an unpdate on her, with regards to her life in the 80s and 90s.
Gilbert>>I hope thru this blog, a relative can shed light on your Barretto query!

Luisa is a beautful! She has captivating facial features!

Are you a relative of Manolita? My lola was her half sister and trying to find out more about the Barretti family roots.

I read in another blogspot that Miss Philippines 1926 was created for our country to have an official candidate in International Pageant of Pulchritude 1926 held in Galveston,Texas USA (later renamed Miss Universe in 1929)? How true was that? If we had representatives in Miss Universe circa 1920s, would our girls have allowed themselves to wear swimsuits and joined the parade in public?

You must have read that here as well. Here is the link: https://manilacarnivals.blogspot.com/2009/02/61-1930-bathing-suit-controversy-i-wear.html