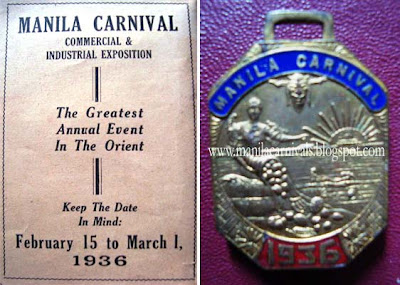 The Manila Carnival of 1936, held from 15 February to 1 March, came on the heels of the inauguration of the 1935 Philippine Commonwealth, a high-profile affair that was held only in November of the year before. It was a month long affair, attended by American dignitaries led by the Vice President of the United States, Hon. John Garner.

It was predictable that the Carnival slogan flagged the aims of the new Philippines: “ For a greater Philippine Commonwealth! For a Strong Agricultural and Cultural Philippines!”. The Carnival spirit was downplayed and the rich agricultural, commercial and industrial potential of an emerging nation was emphasized, to the extent that the 1936 event was dubbed the Philippine Exposition—and it made clear that the organizers were the “successors of the Philippine Carnival Association”. Arsenio Luz continued to be the exposition’s Director-General.

The agricultural exhibits opened on 29 January and continued till 14 February 1936, serving as lead-in teasers to the main Carnival festivities. Impressive showcase booths were built, and among these were the Sugar Palace, Rice Center, Forestry Pavilion, Tobacco Emporium, Hall of Mines, Copra Castle, Hemp Tower and the Temple of Commerce and Industry.

When the gates of the exposition were thrown open, crowds once more were dazzled to a host of shows, rides, costume balls, gala nights and contests. For example, a Radio Night was launched in which female announcers competed for the honor of being the Radio Queen.
The excitement over the Commonwealth festivities and the Christmas season that followed spilled over to the February Carnival, a rare and prolonged celebration that people of the peacetime era still fondly remember.
Posted by Alex D.R. Castro at 5:02 PM