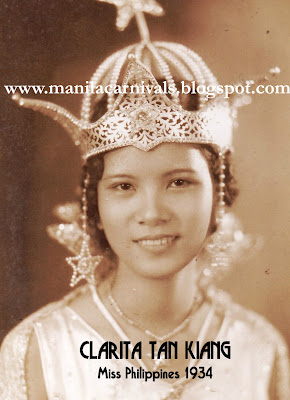 In the 1934 edition of the Manila Carnival, the Miss Philippines crown went to an Oriental Filipina beauty, instead of the Spanish mestizas who had regularly dominated the past editions of the pageants. That year's winner was UP coed Clarita Tan Kiang. Clarita's father, Eduardo Tan Kiang, was born in Amoy, China and arrived in the Philippines as a young boy. He met and married Luisa Villarica and the couple settled in Marilao, Bulacan. Eduardo would serve as the first municipal mayor of this town and would further expand his family to 10 children.


When the children came of age, they were sent to Manila schools, and so the Tan Kiangs eventually spent more time in the city than in Marilao. Besides, Eduardo had other business interests in Manila. Clarita, the second eldest child, finished high school at the Holy Ghost College. Simultaneously, she also took up music courses at the University of the Philippines Conservatory of Music. 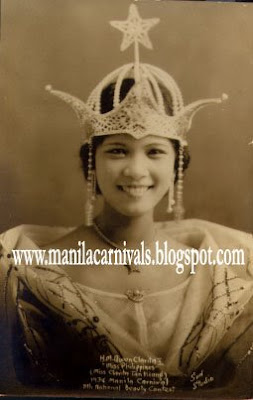 It was as a high school student that she was nominated to vie for the Miss Philippines title, and The Philippine Collegian became her major sponsor. Clarita had, as her main drumbeater, Arturo Tolentino, the editor of the school publication.Clarita was wrote about in the school paper in glowing terms—from her “laughing eyes, bedimple smile” to her voice that was likened to “the tinkle of golden bells”.


However, Clarita faced formidable opponents at the pageant. She had to contend with the reigning Miss Manila, Marcelina Cuenca and a bevy of Kapampangan belles led by Luz Sarmiento of Bacolor and Lucy Pamintuan of Angeles, daughter of Pampanga’s very affluent hacendero, Don Florentino Torres Pamintuan. Then there’s Luisa Laconico, a cousin of last year’s winner, Engracia, who was no less beautiful. 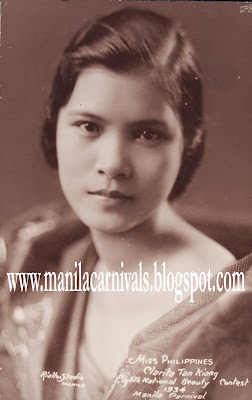 The Chinese community’s support of Clarita proved pivotal, as when all the votes were accounted for, Clarita came on top of the heap. She was thus proclaimed as Miss Philippines of the Eight National Beauty Contest in glittering ceremonies at the Carnival Auditorium together with her court: Luisa Laconico as Miss Luzon, Marcelina Cuenca as Miss Visayas and Consuelo Villamor, a UP schoolmate, as Miss Mindanao. 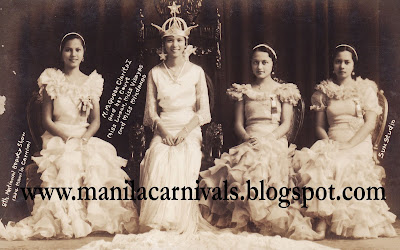 She received her crown that was uniquely designed with three stars representing the island groups—one star as a center topper, and two, dangling on strings of pearls. Clarita kept this crown as a memento of her reign all her life. She wore a sequined terno at her coronation, but changed to a billowy long sleeved gown with a long train for her Miss Philippines Night. Her damas wore identical ruffled numbers, with consorts dressed as Grecian princes. 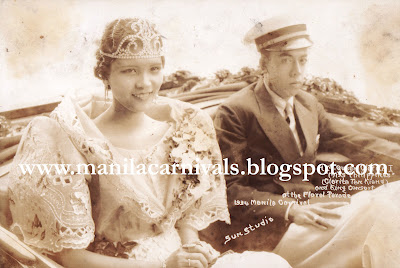 It was back to her studies at U.P. when the Carnival ended, and she made up for her lost time by taking summer classes. She finished high school in 1935 and continued with her music course at the U.P. Later she enrolled at the College of Banking, Business and Economics, but her studies were interrupted by the coming War. Clarita did not remain idle and instead, she worked with a group that ministered to ailing former prisoners in a Pasay-based hospice. She worked tirelessly to maintain this home for convalescing war patients.


When the war years ended, she went back to her books, enrolling at the Philippine Law School, and earned another beauty title—Miss Justice—as part of the school’s silver anniversary celebration. It seemed that Clarita was too busy to make time for romance; she was already in her 40s when she found true love.


In one Malacanang occasion, she was introduced to Conrado Sanchez, a widower and a former law school professor, by First Lady Trinidad Roxas, herself a former Carnival Queen. Conrado was all set to become a Supreme Court Justice when he was smitten by Clarita. They tied the knot on 9 May 1965 and adopted a child in 1969. 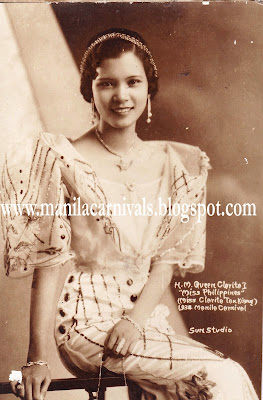 After law school, Clarita immersed herself in the Tan Kiang family business and founded professional women’s organizations such as the Women’s Management Association and the Women’s Lawyers’ Association. She remained involved in socio-civic causes in her golden years, but she also continued to honor her roots by keeping her Marilao haven until her death.
Posted by Alex D.R. Castro at 6:11 PM