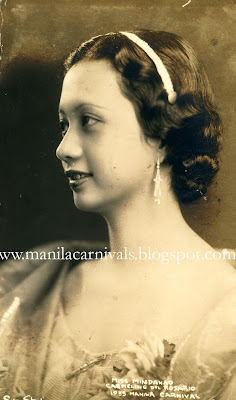 THE ORIGINAL MISS MINDANAO OF 1935. Carmen "Carmeling" del Rosario joined the contest as a favor to her father's friend, an editor of a newspaper. She was so sure that would not win but she did. She immediately resigned here title in compliance with her father's wish to prioritize her studies.

As soon as Carmen del Rosario was proclaimed as Miss Mindanao 1935, her face was splashed all over the national papers alongside her co-winners. But her reign was a short-lived one, for soon after, Carmeling resigned her title under the most unusual circumstances that sent the Carnival Association frantically looking for a new regional queen. 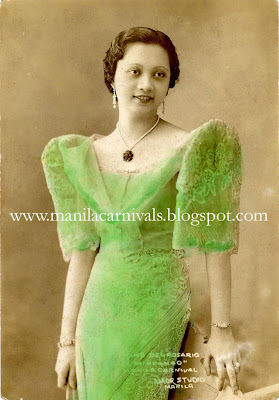 Carmeling, as she was to be known all her life, was born in Manila on 2 July 1916 to Jose del Rosario and the former Carmelita de Leon, one of 9 children. Her paternal grandfather, Anacleto Sales del Rosario (b. 13 July 1860/d.1895) was the country’s leading chemist during the Spanish times and was known even to Jose P. Rizal. His pioneering work on nipa palm and its products won First Prize at the 1881 World’s Fair in Paris. Today, he is known as the Father of Philippine Laboratory Science. 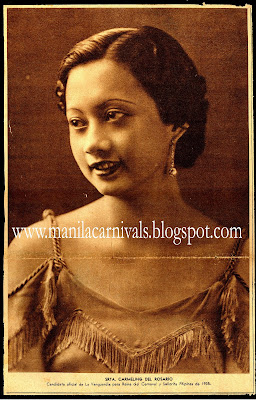 LA VANGUARDIA'S CANDIDATE. Carmeling del Rosario in a publicity photo drumming up her candidacy to the 1935 search for Miss Philippines.

Carmeling was a standout campus beauty of Centro Escolar de Señoritas where she spent her college years. An editor of La Vanguardia newspaper—and a close friend of her father—had been beseeching him to allow the paper to sponsor her candidacy in the search for the queen of the 1935 Manila Carnival. Carmeling’s parents did not really approve of such beauty shows, but after much persuasion, and perhaps thinking that her chances of winning were slim, her father relented. One stipulation of the agreement however was that should Carmeling win, she would have to quickly relinquish her title. 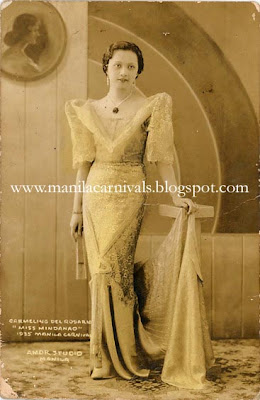 As luck would have it, 19 year old Carmeling was one of the top vote-getters of the 1935 Carnival, eventually garnering the Miss Mindanao crown, just 3 steps away from the eventual winner, socialite Conchita Sunico. But for her family, there was no real cause for rejoicing. 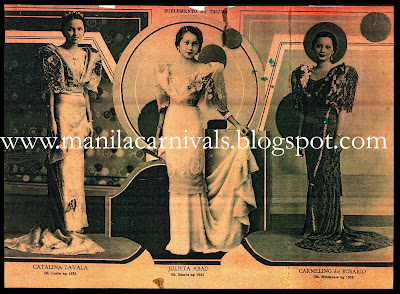 THE ROYAL ENTOURAGE ANNOUNCED. The 1935 roster of winners have already been announced and printed on national dailies when Carmeling relinquished her title. She was succeeded by Celia Araullo.

Her victory had already been reported in national papers together with Catalina Zabala (Miss Luzon) and Julieta Abad (Miss Visayas, who had a Kapampangan escort from Tarlac, Jose Feliciano, later to be a Secretary of Agriculture under Pres. Diosdado Macapagal’s term), when she announced that she was giving up her title. Her conviction to stand by her decision in fulfillment of her father’s wish ruffled quite a few feathers among the carnival officials and participants who now believed her to be a nuisance candidate. Thus, 4th placer Celia Araullo was elevated to the court as Miss Mindanao. 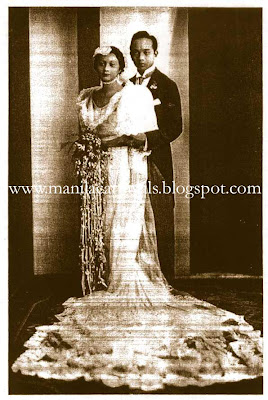 WEDDING OF CARMELING DEL ROSARIO AND VIRGILIO RODRIGUEZ. A much publicized 'wedding of the year" between a short-lived beauty titlist and a well-heeled Kapampangan from an affluent San Fernando family.

But her all-too-brief carnival days were not without wonderful moments. That same year, she met Virgilio Rodriguez, son of sugar baron Don Godofredo Rodriguez and Doña Victoria Hizon of San Fernando. On 26 June 1935, Carmeling and Virgilio were married in spectacular rites at the Sto. Domingo Church, on 26 June 1935, a talk-of-the-town wedding that merited coverage in the Pampanga Social Register 1936, which chronicled Pampanga’s alta sociedad events. They settled in San Fernando where she quickly learned to speak in Kapampangan. They had 5 children: Victoria, Godofredo, Gorgonia, Ana Marie and Jo Anne. Although in delicate health, 93 year old Carmeling is settled in San Lorenzo Village, Makati today with an unmarried daughter.
Posted by Alex D.R. Castro at 4:55 PM