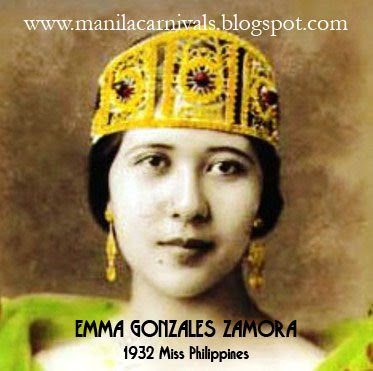 1932 MISS PHILIPPINES. Emma Zamora of Quiapo, the Hongkong educated beauty who took the Carnival by storm, led a short but a full life, passing away at the very young ae of 30. Her regn is remembered for the many dignitaries she met, including the Governor General of French Indo-China.

Emma Zamora y Gonzales, the 1932 Miss Philippines, was often described as having the perfect face, oval shaped, with languid eyes, a fair complexion and small pouty lips. Combine that with her pedigree—the Zamoras came from ’s aristocratic Quiapo district—and so it came as no surprise that Emma was crowned our sixth Miss in the annual Manila Carnival. 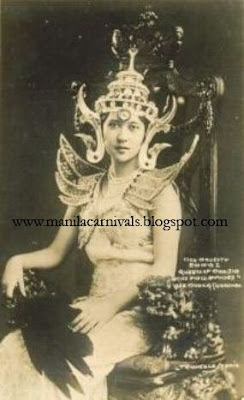 SIAMESE BEAUTY. Emma dressed as Thai royalty, which was the theme of her coronation. Her bejewelled headdress doubled as her crown.


Emma was the eldest of three children, born to Manuel Zamora and Josefina Gonzales. As an only girl, she was naturally pampered and was sent to the French Convent in at age 18. She returned to for her debut and immediately, the tall, willowy beauty caught the fancy of ’s alta sociedad and was immediately enlisted by the powerful Bachelors’ Club as their official candidate to the country’s most prestigious contest of Filipina pulchritude. 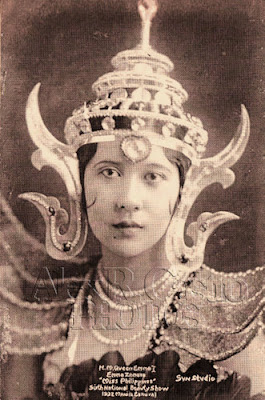 SIAMESE SPLENDOR. Emma Zamora had the distinction of wearing two different crowns--a Thai-inspired crown that was part of her costume and also a a banded rhinestone tiara.


She swept competition away with the British-Chinese-Filipina beauty Rosalina Lim coming in second as Miss Luzon, Aleli Guzman as Miss Visayas and the comebacking beauty from the 1930 Carnival, Violeta Lopez, as Miss Mindanao. Emma’s moment of glory was the talk of the town, for the Coronation motif was Siamese. The exotic costumes were truly a feast for the eyes. Emma was attred like a Thai royal with a stupa-inspired, gem-encrusted headdress that doubled as a crown. She carried a feather fan and wore a sleeveless beaded gown with winged decorations on the shoulders reminiscent of kinarees (angels) from Thai mythology. Her entourage wore similar, simple Thai costumes. 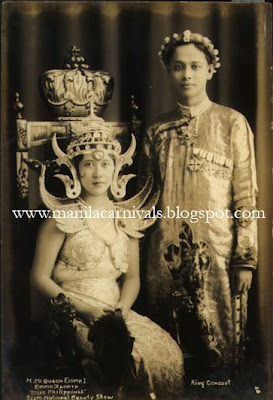 QUEEN EMMA AND KING CONSORT. Emma with Dr. Arturo de Santos. He was the brother of Alicia de Santos, Miss Luzon of the year before, who relinquished her title.


Emma was escorted by Dr. Arturo de Santos, a young bachelor of wealth and culture. He too, was in character during Emma’s coronation, regal in a long Oriental tunic. The highlight of her coronation included meeting the Governor General of French Indo-China, President Manuel L. Quezon and other high government dignitaries—unprecedented in Carnival history. 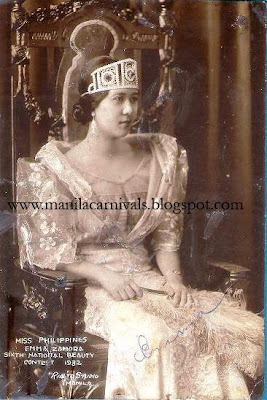 Emma changed to a simpler banded crown and Filipiniana attire designed by Pacita Longos for her other royal appointments, which consisted mainly of crowning provincial queens, attending social functions which sometimes require her to travel by boat. Despite her stature, Emma’s feet remained firmly on the ground and after her reign was over, she married Dr. Enrique Ruiz, a longtime family friend and several years her senior, a year after the Carnival.

The couple had five children: Enrique Jr., Josefina (died in infancy), Isabel, Anna Maria and Eduardo. Emma’s fairy tale life was destined to be short, for child-bearing and the war took its toll on her health. She was bedridden for most of 1942 and on 20 March 1943, the toast of the 1932 Manila Carnival, Emma Zamora, passed away at age 30.
Posted by Alex D.R. Castro at 6:09 PM

The name of the fifth child is Eduardo Zamora Ruiz. My grandfather the only child who still lives on until now was anna maria..

Thank you for the added info, I have edited the post to reflect your input.

My mother-in-law, Dr. Eva Gonzalez, was Emma's aunt, and one of the early radiologists of the Philippines. She had her own small X-Ray clinic in Quiapo. My wife, Milagros Jamias, remembered Emma's passing well: Tuberculosis was a much-feared deadly disease back in the thirties, and one day the family frantically brought Emma to the clinic -- she had coughed up blood! X-Ray was the tool for TB diagnosis. Unfortunately, the X-Rays did reveal advanced tuberculosis, and the family heard it like a death sentence, with much lamenting and crying. It made a big impression on my wife, who was only nine at the time. And, in fact, poor Emma did not live long afterwards.

SO she died a very young woman, what a waste, she made her name for herself, TB was a fatal desease the, theres no potent medicine yet.

Thank you Sir Robert Carr, your comment gave me an additional knowledge of my grandmother Emma. I am the fifth child of eight of the late Enrique Ruiz Jr., Emma's eldest child. We were only told that our grandma died of Tuberculosis without the details. My Auntie Anna Maria "Annie" Ruiz-Olegario, Emma's 4th child is still in good health. Thank you and God bless.

Himmy, I am glad you were interested in my info about your grandmother Emma. So you are a cousin of my children and grandchildren. I inherited my mother-in-law's family fotos, which include many with Emma as a young girl, as well as her mother Josefina, and Josefina's parents Vicente Gonzalez & Eugenia Salvador, and Eugenia's mother Vicenta Padilla. If you would like any of these, Please send me your email address and I'll send copies to you. my address is carrrobert83@gmail.com.

Wow! I would love to have a copy of the photos. I named my only daughter after my grandma's name Emma, "hoping" to be a beauty queen someday. Thanks, I'll send my request thru my email. GOD BLESS.

I think you guys are our relatives. Emma Zamora was our father's eldest sister. Our father's name is Ramon Gonzales Zamora.

By the way, my name is Rey S. Zamora residing in San Francisco. Ca USA..

Hello Rey! I know you! I'm Finina, Chiquiting's eldest. I've been looking for you. Please email me ninruiz@ yahoo.com.