Luisa sought to extend the reign of beauty of the Laconicos by running for the Miss Philippines queenship in 1934. It was a tall order, as the reigning royal was her own first cousin, so it was unlikely that she would figure at all in the finals. Her facial beauty and form were outstanding, even by today’s standards (she was called ‘Body Beautiful'). It came as no surprise that she placed a strong second in the finals, claiming the 1934 Miss Luzon title.

At the coronation, she was escorted by Hector Gomez, whom she eventually married the next year at the Quiapo Church. Their main wedding sponsors were Dna. Angela de Butte and Gov. Ramon Racelis. 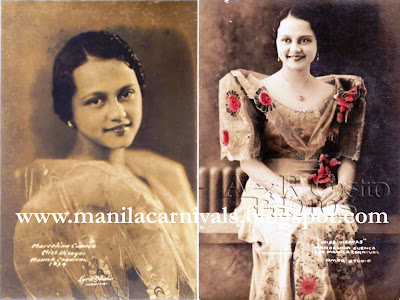 MARCELINA CUENCA, Miss Visayas 1934
Marcelina Cuenca, the 1934 Miss Visayas had represented Manila in the Philippine Free Press search for Miss Philippines. In the finals, she placed second to win the Miss Luzon title. She took one more shot at the more prestigious quest for Miss Philippines of the Manila Carnival and earned a spot in the winner’s circle by becoming Miss Visayas. Her Prince Consort was Antonio Albert. 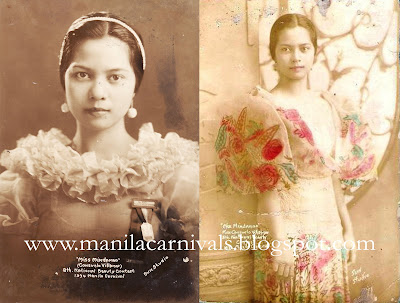 Consuelo, Miss Mindanao 1934, was the daughter of Pedro and Josefa M. Villamor. She was born on 26 September 1911 in Bangued, Abra. Her siblings included Domiciano, Baldomero, Belen (Sr. Thecla of St. Paul) and Luz. “Consoling” spent her early years in Abra, but at various times, she also lived in Sta. Rosa, Laguna and Cabanatuan for her high school education. She was a popular girl in her time, famous for her beauty and intellect, and for which she was elected Miss Abra.

When she went to Manila to study at the University of the Philippines, her popularity grew even more. She became a cadet sponsor of the school’s R.O.T.C., an honor reserved for accomplished campus beauties. When nominations for the 1934 Miss Philippines opened, Consuelo was the overwhelming choice of U.P. She did not disappoint, as when the judges handed out their decision, they included the lovely Consoling in the winners’ list as Miss Mindanao.

The heady Carnival days soon ended and Consuelo went back to her books at the state university. Upon graduation, she taught at her alma mater and became an accomplished academician, educator and author, serving U.P. for many years. The grateful school named her a Professor Emeritus.

In the midst of her career, she married Abraham A. Asis and bore three children, Antolin, Victor and Angela. The Villamor family settled in San Juan. Consoling lived a long and full life, outliving all her siblings, husband and two sons. She passed away on 6 April 2009, just a few months short of her 89th birthday.