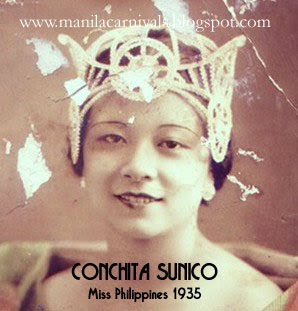 1935 MISS PHILIPPINES. Conchita "Conching" Chuidian Sunico was a popular society girl who took to heart the "beauty with a purpose" philosophy, becoming even more well known for her advocacies in arts, socio-civic and war causes.

Even before her candidacy to the 1935 search for Miss Philippines was announced, Conchita Sunico’s sterling reputation as a social leader had already been established, thus putting her at the forefront for the title. Conchita was born to Tomas Sunico and Paz Chuidian of Binondo, and their youngest daughter grew up amidst the trappings of Manila’s high society when they moved to Malate. 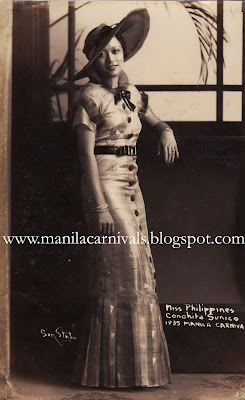 THE YOUNG CONCHING, toast of Manila's elite society, was known for her fashion sense and style.

As a teen-ager, Conching headed several socio-civic associations whose members consisted mostly of Manila’s young elite. When she came of age as a debutante, she modeled on the side, becoming a popular fashion icon to her contemporaries. At the time of her nomination for the national queenship, she was the president of the Smiles Club and the muse of the Bachelors’ Club, rival associations united for once, in their support for Conching. 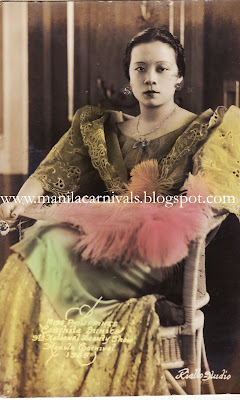 THE QUEEN ENTHRONED. Official photo of the 1935 queen, beautiful of face and regal in bearing.

At the onset, Conching steadfastly refused to be nominated to the point that she even gave her vote to another candidate. But so insistent were her newspaper sponsors, and so intense was the support—she was the personal choice of Pres. Manuel L. Quezon—so Conching went ahead and joined the contest. On 17 February, Conching was presented, along with the other candidates, in the Princess of the Art Night, dubbed as a “Pageant of National Beauties”, at the Carnival Auditorium. That night, the winners were announced with Conching winning the crown effortlessly, without even trying. 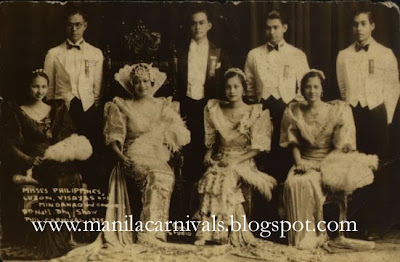 Two days after came her Coronation Night. For her big day, Conching did away with the usual foreign fantasy themes and went Filipiniana. She was escorted by her handsome cousin, Antonio Bayot. Her court of honor included Catalina Zabala as Miss Luzon, Julieta Abad as Miss Visayas and Celia Araullo, who replaced Carmen del Rosario when she relinquished her title as Miss Mindanao. Mr. J. Pardo de Tavera emceed the ceremonial proceedings and a post-coronation garden party was held in the winners’ honor. 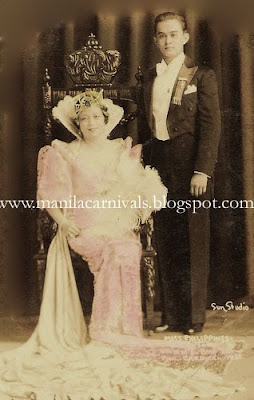 QUEEN CONCHING WITH KING CONSORT. Conching picked her good-looking mestizo cousin, Antonio Bayot to be her official escort for the duration of her reign.

The fist royal duties of the Queen and her court included gracing gala events of the Carnival. Miss Mindanao presided over the Prosperity Ball, while Miss Visayas graced the Parisian Night. Miss Luzon was the honored guest of the Far Eastern University Night while Conching, as Miss Philippines, was the star of the Miss Philippine Ball, emceed by the Hon. Buevantura Rodriguez on 3 March, the last day of the Carnival. Here, Conching and her court received their prizes as the Carnival royalties of the year. 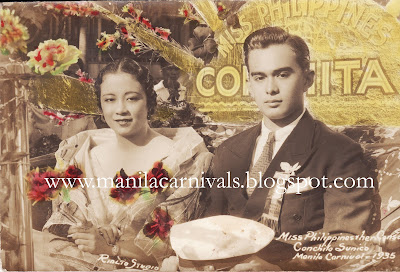 AT THE FLORAL PARADE. Conching and Tony ride a flower-bedecked automobile at the traditional floral motorcade of the 1935 Carnival.

After the Carnival, Conching continued on with her nationalistic pursuits. Before the War, she assumed presidency of the Young Ladies’ Association of Charity, which organized benefit events for their various advocacies. When the War reached the Pacific, Conching did underground work and became a member of the Volunteer Social Aid Committee (VSAC) which counted Helena Benitez and Pilar Campos as members. She helped ran a hospital for the wounded, organized community kitchens for the hungry and managed a secret mail service for Manilans and their relatives imprisoned in Capas and Cabanatuan. Their programs were supported by fund raising productions like “La Traviata” and “Cavalleria Rusticana”. For her significant contributions to the war efforts, she was awarded the Legion of Honor by a grateful country.

When the War drew to a close, she proved herself a woman of culture by putting up high-profile shows for Malacañang functions highlighting various aspects of Philippine traditions. From this sprung Karilagan, the international fashion group she founded and which found fame the world over. In 1964, she was appointed as a Tourism Commissioner and in the 70s Marcos era, the fashionable Conching was named as one of Manila’s Ten Best Dressed, an affair that was marked with protest against this show of frivolity in the midst of the country’s growing poverty.

"TITA CONCHING", IN HER GOLDEN YEARS, actovely supported Philippine arts and culture and was, at one time, director of the restored Manila Metropolitan Theater.

When the Metropolitan Theater of Manila was restored to its glory in 1978, she was appointed as its first Executive Director. The theater sits just across the historic Luneta, where decades before, Conchita’s triumphant reign as the country’s ninth Miss Philippines began. Tita Conching, as she was fondly called, passed away at the age of 76 on 1 August 1990. She was the first to be bestowed the Presidential Medal of Merit, given posthumously by Pres. Corazon Aquino. On 18 May 2009, to honor her legacy in the performing arts, fashion and charity work, a concert entitled “Mga Ginintuang Ala-ala ni Conching Sunico sa Met” was staged at the Cultural Center of the Philippines.
Posted by Alex D.R. Castro at 4:39 PM

No, he was a businessman.

So Tomas and this wonderful lady is not related to the Hilario's of San Nicolas?

There must be a link, somewhere, and earlier generation perhaps, considering that Hilario worked in the Binondo area. I have not established that connection though.

Yes, there is a definite link. Tomas Sunico, my maternal grandfather, was the son of Hilario Sunico.
I know that the family owned the business called "Taller y Fundacion de Hilario Sunico" and that they made church bells in Binondo. My grandfather had a brother (Tio Moni) and sister (Tia Chichay), both of them lived in Binondo.

Yes, there is a link. My grandfather Tomas was the son of Hilario Sunico, who had a business in Binondo, making church bells.

Sorry for the late reply. Many thanks for enlightening us on the Sunico connection!