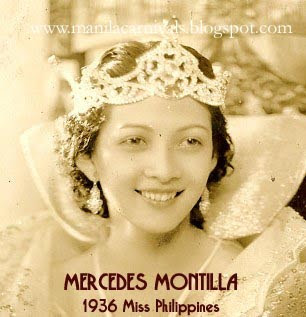 1936 MISS PHILIPPINES, Mercedes Montilla Montilla of Kabankalan, Negros, was the daughter of the first Speaker of the Philippine Assembly, Gil Montilla. One of the prettiest winners of the Miss Philippines title, she would later become a well-loved politician.

In 1936, a Southern beauty made her mark in the annual Carnival by capturing the crown of Miss Philippines, leaving three beauties from Luzon to fight for the regional titles. Mercedes Montilla of Negros Occidental was born on 14 July 1915, the daughter of Gil Montilla, a prominent sugar planter and the first Speaker of the Philippine Assembly. She was named after her mother—Mercedes Sr.—who was also a Montilla from Pulupandan, and a second cousin of Gil. The Montillas had Spanish roots, and this was evident in Mercedes’s fair and delicate beauty. But behind her refined femininity, a woman of strong character, influence and power would soon develop. 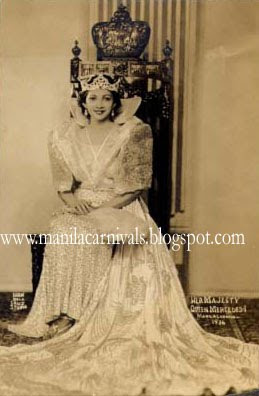 At the time of the contest, “Merceding” was a 20 year old young woman who grew up in an affluent home. As it was the fashion then, she was sent to a convent school in Hong Kong and later returned to study at the Philippine Women’s University for her high school. Her schooling was momentarily interrupted with the advent of the 1936 Carnival, when she was drafted to run for the queenship of the greatest annual event of the Orient. 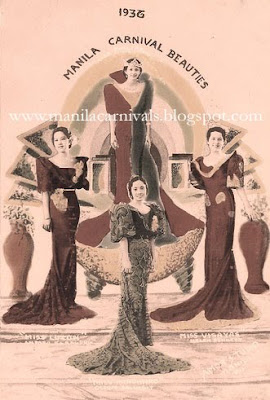 Mercedes’ candidacy earned approval from her family, as it eventually served to heighten the popularity of her politico father. She, however, faced stiff opposition from Bulacan belle, Amparo Karagdag, who, after the contest would be linked to Pres. Quezon. Nueva Vizcayan-born Helen Bennett, an American mestiza posed another threat, as she had been the Philippine Free Press winner of Miss Pearl of the Orient. In the homestretch, Mercedes emerged victorious, relegating Amparo Karagdag to second place (Miss Luzon) while Helen Bennett and Kapampangan Cleofe Balingit captured the Miss Visayas and Miss Mindanao titles, respectively. 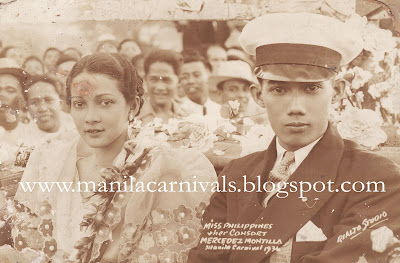 At her coronation, she was escorted by fellow Visayan Zafiro Ledesma, later the mayor of Iloilo City She wore a sequined gold lame native gown and her Crispulo Zamora-made crown had a more traditional design Her crown was of silver studded with rhinestones and with three colored stones of red, white and blue, set brilliantly in front. True enough, Speaker Montilla rode on the crest of his daughter’s triumph, often taking her with him to state functions attended by all sorts of VIPs. Those were heady times for the 1936 Miss Philippines, a role she played with aplomb. 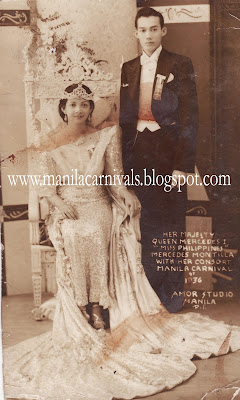 Three years after the Carnival, she met a sugar planter and a chemist—Genaro Alvarez, from Kabangkalan, Negros. They got married in 1939 and initially settled there, until the War, where they moved to Sipalay. They fell in love with the town and remained there even after the war’s end. The couple had three children, Genaro Jr., Rosemarie Alvarez Isidro (a U.S. based doctor ) and Aurora Alvarez Guariño. 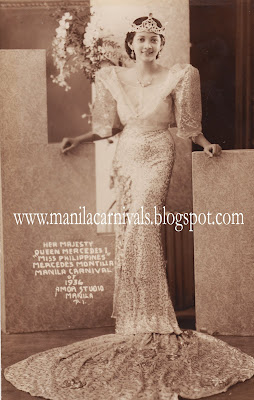 In the mid 1950s, Genaro Alvarez ran for mayorship of Sipalay and won, serving two consecutive terms. He tried running for a third term, but he was stabbed to death four days before the elections, a politically motivated murder. Mercedes, his widow, took his mantle and ran in his place, winning by an incredible margin. She proved her political mettle by running successfully for a second and third term, retiring undefeated in 1976.

She spent the rest of her days in Bacolod City with son Genaro Jr., but would also find time to visit Sipalay where their old house still stands. Our 1936 Miss Philippines passed away on 24 September 1993 due to kidney failure. She rests next to her husband Genaro in the family's mausoleum in Bacolod that has a stained glass picture of her as a Carnival Queen. Genaro Jr. today is a member of the House of Representatives, from the sixth district of Negros Occidental.

FAMILY UPDATE: The old house in Sipalay is already gone but the ancestral home in Kabankalan still stands, home to the present generation of Montillas-Alvarezes. Daughter Rosemarie, a practicing psychiatrist, lives in Washington. Aurora and her family are Manila residents. Son Genaro Jr. is now the vice-governor of Negros Occidental. His two children are also in politics: son John Paul Alvarez is the Mayor of the Municipality of Ilog, while daughter Mercedes is a congresswoman of the 6th district of Negros Occidental. (Many thanks to Cong. Mercedes "Chedeng" Alvarez for these updates!)

Beautiful post about a civilised era except for the stabbing part.

Many thanks. While the Carnival series is coming to an end (the 1939 edition of the Carnival would be the last), I hope to gather more stories related to these grand events that showed how much our country has accomplished and preserved by way of tradition, considering all that we've been through--from colonization, several wars, a Revolution, a devastating World War and other natural and man-made calamities.