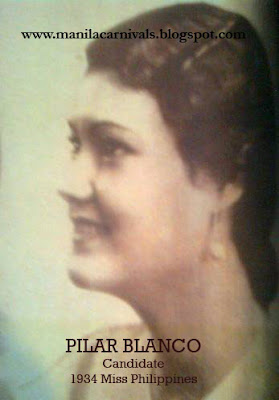 PILLAR OF BEAUTY. Pilar Blanco, a classical pianist from Cebu, was a popular candidate to the 1934 Manila Carnival quest for Miss Philippines. Her daughter is also a concert pianist of repute, Ingrid Sala-Santamaria. Ca. 1934.

Pilar Blanco was a budding classical pianist from Cebu when she started attracting the attention of local beauty aficionados. She was one of the first graduates of Sister Baptista Battig, a German Benedictine nun who came to Manila in 1908 to teach music. The good sister rented out pianos in makeshift classrooms and taught Filipino students Western music and techniques.

Among Pilar’s co-students were Marcela Agoncillo, Pacita Zaragoza, Blanca Castillo and Imelda Katigbak; the latter two became concert artists. Pilar herself was an ardent and accomplished pupil of Sr. Battig. Eventually, Sr. Battig would eventually set up a regular music department in a Singalong school that would be known as St. Scholastica’s College.

When it was time to nominate a candidate for the queenship of the 1934 Manila Carnival, Pilar’s name was submitted by the newspaper, “The Social Fountain”, which avidly supported her. Hopes were high for the Cebuana who not only possessed mestiza good looks but also an exceptional musical gift. But competition was stiff that year; the crown went to a Chinese-Filipina from Marilao, Clarita Tan Kiang, a student of the University of the Philippines.

Pilar, however, had other things planned, one of which was to marry her handsome beau, Salvador E. Sala, an educator. Even with a family to care for, Pilar continued her passion for the piano, by setting up a music school in her native Cebu. She named it the Battig Piano School, in honor of her mentor, and when her daughter Ingrid came of age, she became her first tutor. Ingrid Sala-Santamaria would pursue her advanced music studies at the world-famous Juilliard School and become a concert pianist of note.

The flowering of the golden age of music in Cebu is credited to the relentless promotion of Pilar Blanco-Sala and her family. It was she who established the Cebu Youth Symphony Orchestra (CYSO), later to be known as the Peace Philharmonic of the Philippines. The Sala children honored their parents with the creation of Salvador and Pilar Sala Foundation, Inc. (SPSFI) in Cebu on 10 October 1998, a non-governmental organization that implements social projects in the field of education and music.
Posted by Alex D.R. Castro at 6:06 AM