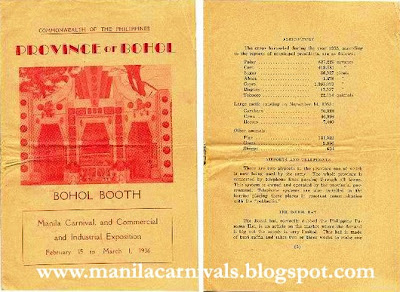 The Commonwealth Carnivals were the last to be celebrated in the country. The 1936 edition was mounted at the usual venue, Luneta, riding on the crest of national enthusiasm, brought about by America’s promise of independence after a 10-year transition period.

Provincial participation continued at the Carnival, and the Province of Bohol was a consistent and active member of the 1936 fair held from 15 February to 1 March 1936. The slant of the Carnival was the same as in the previous year, with emphasis on the Philippines’ commercial and industrial progress.

Bohol staged an art deco booth, featuring representative samples of its products. This complimentary brochure served as a guide to the province, to attract prospective investors and tourists alike. 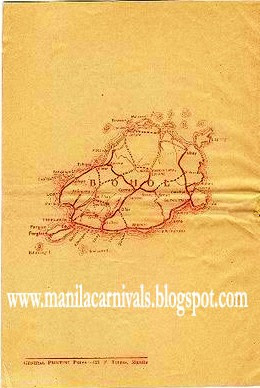 From the write-up, we see that Bohol’s agricultural produce included palay, corn, sugar, abaca, cogon and tobacco, in that order. A census of the province’s animal stock was also featured, complete with a tally of the number of carabaos, cows, horses, pigs, goats and sheep found in the region.

Putting its best foot forward, Bohol also boasted of its new services and infrastructures, including its two airports and the telephone system connecting the island to the rest of the Philippines and the world. The looming war in the would put a halt not only to the national fair but also the great Philippine dream.

On 17 May 1942, just 6 years after the Carnival, Bohol would be invaded by the Japanese by way of Tagbilaran. Three very difficult years where to follow, until the return of the Americans to Bohol on 11 April 1945. A year later, Bohol became a part of the independent Republic of the Philippines.
Posted by Alex D.R. Castro at 7:29 AM