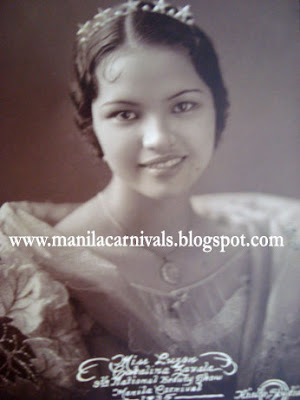 Catalina Zavala Moreno was born on November 11, 1916 to Luz Vasquez Villena and Aquilino Zavala, both residents of Tondo, Manila. She was the eldest of 5 siblings, 3 girls and 2 boys. She spent her childhood and early adult life in Tondo, went to primary school in Sta. Catalina College and attended the University of the Philippines for a course in Home Economics.

Catalina, or Nena, as she was fondly called, was a beautiful child, and often elicited admiring glances and comments when she accompanied her mother on various outings. She was known as "muneca" (Spanish for 'doll') because of her fair skin, brown hair and beautiful brown eyes and long curly lashes. Nena grew up to be a tall, willowy and winsome beauty and many suitors were after her during her years in the University. It was during these years that she was asked to vie for the title of carnival queen, that era's version of our beauty pageant.

As history records, Nena won the title of Miss Luzon during the 1935 carnival. Photos of the coronation night show her to be a lovely, slender and graceful young woman, poised and confident, yet still sheltered and innocent, on the cusp of womanhood at age 19. 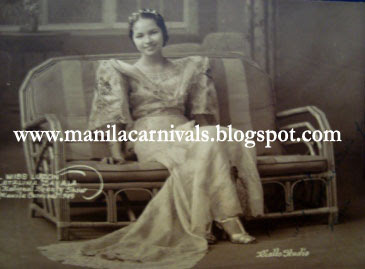 She was swept off her feet by young, dashing and handsome Hector de Santos Moreno, youngest scion of the respected de Santos-Moreno clan, just arrived from a four year course in Heidelberg, Germany. He was the grandson of Marcelino de Santos (treasurer of the Katipunan, associate of Jose Rizal),who has a street in Divisoria named after him, and youngest son of Pacita Ongsiako de Santos and Roberto Gutierrez Moreno (then Fiscal of San Pedro, Laguna). 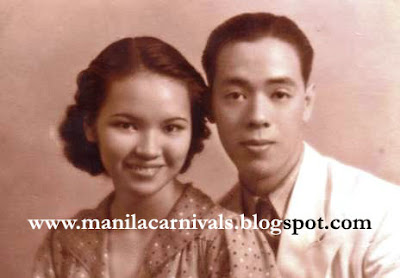 Hector fell in love with Nena and persuaded her to elope with him in the summer of 1936. They were married in Baguio on April 14, 1936 and took up residence in the Moreno mansion on Juan Luna Street in Tondo, Manila -- then one of the more respectable residential areas in old Manila. Hector and Nena's early married life was spent in this house, along with the young families of Hector's siblings: Ada Moreno de Leon, Nitang Moreno Lopez, Mario Moreno and Elsa Zamora, and Choling Moreno and Enrique Villanueva. In later years the siblings left Juan Luna to take up residence in other parts of Manila, but Hector and Nena remained there along with Ada and Sancho de Leon. 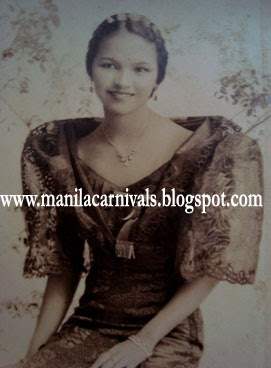 One interesting footnote about this imposing structure built on approximately 20,000 square meters of land is that an exact replica of the house was built in Gagalangin, a few minutes away from Juan Luna, by the same architect. This second mansion housed the de Santos siblings.

Hector and Nena Moreno stayed in Juan Luna until 1950, when they moved to Horseshoe Drive with their 5 children. Two more children were born after the move to Quezon City, and Hector and Nena lived here until their last days. 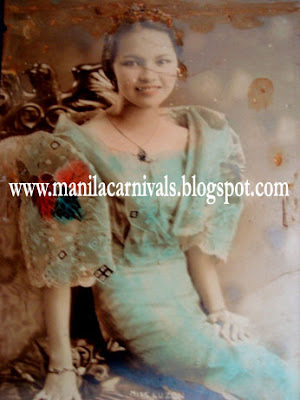 Nena quickly involved herself in the neighborhood association, and as president worked at organizing the neighborhood along with the other residents' wives. She also threw herself in Jayceerette activities in full support of her husband's membership in this organization, participating in most of the fundraising activities of the group. She was a full-time mother except for when she ran the restaurant Talk of the Town at Manila Doctor’s Hospital and when she ran the family's 300-hectare hacienda in Nueva Ecija. Apart from these commitments, Nena was basically a housewife, devoted to the care and upbringing of her (now) 7 children; Roberto, Hector, Maria Paz, Jose Luis, Maria Isabel, Miguel and Maria Luz. 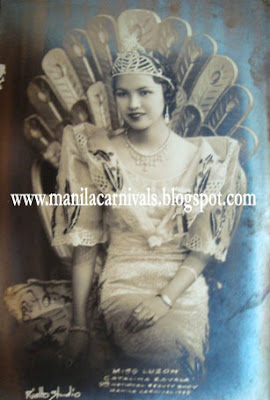 In her later years, Nena devoted her days to parish prayer meetings and related activities and to the care of her husband. She was always the focal point in family gatherings, and her children and grandchildren cherish the memory of many happy, noisy and fun-filled family events in Horseshoe Drive. Nena was always caring, supportive and loving to all the members of her family. Her incomparable sense of humour, her incisive witticisms and words of advice, her wisdom and generosity made her the perfect mother, the perfect lola, the perfect wife, and these are the traits she will always be remembered for. She passed away at the age of 81 on May 13, 1998, and Hector followed 3 years later on May 14, 2001. She was a beauty all throughout her life, doted on by her husband, loved by all.

(This contributed piece was made possible through the efforts of Andrea Tantoco (Catalina's granddaughter) and Maria Luz (Jackie) and Maria Paz (Tootsie) Moreno who wrote this biographical sketch based on their recollections of their parents, Catalina and Hector Sr. Many thanks!).
Posted by Alex D.R. Castro at 5:31 AM

Thank you. I am hoping to have it in book form soon.