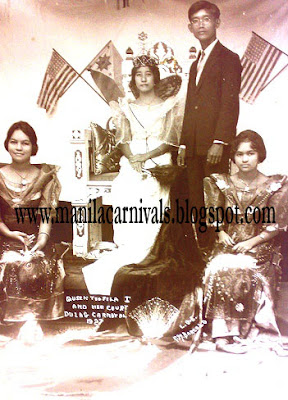 THE 1927 DULAG CARNIVAL. Celebrating the beauty of Leytenas, under the American Regime.

1927 was the first and only time that a Miss Leyte was named to compete in the Manila Carnival search for Miss Philippines; the winner was Amelia Zialcita Romualdez, a cousin of Imelda Romualdez (Marcos). Her participation inspired municipalities to hold their own carnivals and elect their own royalties, even at a local level only.

One such town that held its own carnival festivities that same year was Dulag, a large and progressive coastal town of Leyte fronting the Leyte Gulf, just 36 kilometers from the provincial capital, Tacloban. Dulag was an important commercial hub in its heyday; ships from all over would dock at its port carrying merchants who traded their products for Philippine abaca, copra, tobacco, rice and wine with the natives. At one time, the shores ofDulag were lined with large warehouses filled with goods that were imported to foreign countries.

As a toast to its prosperity, the municipality organized its very own Dulag Carnival of 1927. Queen Teofila I and her retinue of princesses and escorts were elected to serve as the carnival royalties, as preserved in this rare photo. The details of the event as well as the background of the queen-elect have all but been lost to oblivion. But the 1927 Dulag Carnival must have been a grand and pompous event, complete with the Philippine-American trappings and trimmings of a royal coronation.

Ruined by the last World War, Dulag would rise again and earned the distinction as a “Liberation Town”. Many veterans still claim that it was in Dulag that Gen. Douglas MacArthur first landed upon his promised return—and not in Palo, Leyte as historians believed.
Posted by Alex D.R. Castro at 5:41 PM