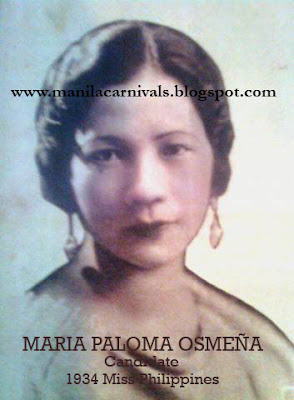 In 1934, the participation of one candidate to the annual Miss Philippines search of the Manila Carnival elicited a lot of interest and media following. Maria Paloma Osmeña after all, was the daughter of Sergio Suico Osmeña (1878-1961), governor of Cebu and Speaker-elect of the 1907 Philippine National Assembly. He would go on to become a Vice President of Manuel L. Quezon in 1935, and eventually become the 4th president of the Philippines (1944-46) after Quezon’s death.

Maria’s mother, Estefania Chiong Veloso, had 9 other children with Sergio: Nicasio, Vicente, Edilberto, Milagros, Emilio, Jesus, Teodoro, Jose, Sergio Jr. Maria’s brothers were involved at some point in Carnival activities like Nicasio or Nick and Emilio, who provided escorting duties to some of the Carnival royalties. Maria’s father would marry a second time to Esperanza Limjap, herself a former Manila Carnival princess.

Maria’s candidacy was supported by a leading newspaper. The competition that year was stiff, with the UP collegian candidate, Clarita Tan Kiang prevailing over the rest of the candidates that also included Lucy Pamintuan, Luz Sarmiento, Pilar Blanco, Pura Luna, Consuelo Villamor and Angelina Diy. Still, her Carnival experience was something she would not forget.

Ten years after, she met and married an accomplished classical pianist in New York on October 1944, James Milne Charnley. Charnley often accompanied opera singers like Bidu Sayao, a Metropolitan Opera House soprano and one of Brazil’s most famous artists. They settled in New York, New York.

When Pres. Diosdado Macapagal changed the date of Philippine Independence to June 12, children of past presidents—including Maria Osmeña-Charnley, were present at the historic signing of the act on 4 August 1964. With her were Gerry Roxas, Carmen Melencio-Aguinaldo, Manuel Quezon Jr. and Tomas Quirino.

Maria and James regularly shuttled back and forth from the U.S. to the Philippines. James also got to accompany local Philippine divas like Nelia Manalo Concordia whenever they gave recitals. After her husband’s death, Maria settled back home in the Philippines and lived to be in her 90s. She reposes at the family mausoleum in Cebu.