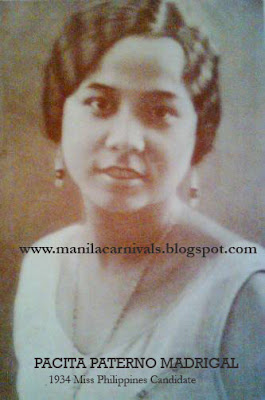 PAGEANTRY, POLITICS AND PACITA. The 15 year old Pacita as a high schooler of Philippine Women's College (now University). She went on to become a Senator in 1955, only the 2nd woman to achieve that feat--and an election topnotcher at that! Ca. 1930.

In the 1934 quest for Miss Philippines, one lovely candidate turned heads not only for her illustrious pedigree and family wealth but also for her academic brilliance that would served her well in the future. Pacita Madrigal y Paterno would go on to greater heights by entering politics and topping the senatorial elections of 1955 under the Magsaysay Administration.

Maria Paz or Pacita was one of the 7 children of the influential senator and millionaire, Don Vicente Madrigal y Lopez of Albay with Susana Paterno y Ramos of Laguna. Born in 1915 in the San Miguel district of Manila, she grew up together with her siblings Macaria, Josefina, Antonio, Jose, Consuelo Alejandra, and Maria Luisa.

At age 19, Pacita was sponsored by Dee Tees, a leading publication of the Commonwealth years, to be their candidate to the annual Miss Philippines Beauty Contest of that year’s Manila Carnival. Competition was stiff—there was the Spanish mestiza Pilar Blanco, Maria Osmena, Marcelina Cuenca (former Miss Manila) and the 2 Kapampangan belles, Lucy Pamintuan and Luz Sarmiento to contend with. And there was the Chinese mestiza beauty from UP, Clarita Tan Kiang, who eventually won the crown.

But Pacita had other things in mind than being just an icon of beauty. She was soon abroad to further enrich her education. She was in New York when World War II broke out on 8 December 1941. Determined to maker herself useful, Pacita took up Red Cross work and also volunteered at the Walter Reed Hospital. 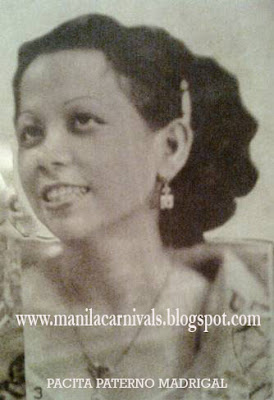 After the war, she married Herman Warns, a Manila Gas Corporation executive and proceeded to establish her ballet school. But in 1953, she gave up her school to head the Women for Magsaysay Movement, and her interest in politics began. With Magsaysay’s victory, she assumed the position as Social Welfare Administrator.

Two years later, she decided to run for the Philippine Senate. Pacita, at age 40, became the first woman to ever top the senatorial elections. According to Time Magazine, she did so with the most number of votes ever garnered by a senatorial candidate up to that time (2,544,716 in all). She was just the second woman after Geronima Pecson, to be elected to the Senate.

As cabinet member when she was SWA administrator, she was involved in some 40 committees, councils, commissions, boards and institutes—from the Council of State, Community Development Council, Slum Clearance Committee, Community Chest to the Philippine National Red Cross, Pan Pacific Women’s Association, and Philippine Committee of United Nations Appeal for Children.

After the death of Herman Warns, the widowed Pacita married lawyer Gonzalo Gonzales in 1956. She was defeated for re-election in 1961 after accusations arose about her misappropriation of public funds in 1956. Had her credibility not been damaged by the charges, she could have posed as a serious threat to Carlos P. Garcia’s presidential candidacy in 1961. The Manila Carnival beauty who could have been the world’s first female head of state, died at the age of 93 on 12 September 2008.
Posted by Alex D.R. Castro at 5:10 AM