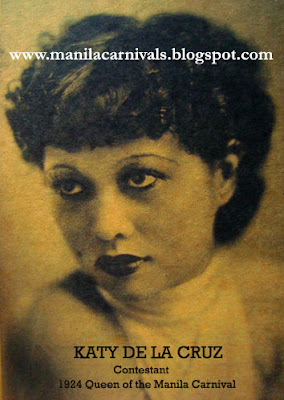 KATY DE LA CRUZ AT AGE 12. The future 'bodabil' superstar, not yet a teen, but already looking like a sophisticated vamp. She was already an established name in the local vaudeville circuit, performing in top-rated movie houses, when she was nominated as one of the Manila candidates for the 1924 Manila Carnival Queen search. Ca. 1919.

In 1924, a city search was conducted to select the Manila candidate to that year’s Queen of the Manila Carnival quest. A 17 year old petite and talented beauty nearly caused an upset by placing a strong second to the eventual winner Lolita Paterno. She was none other than Catalina de la Cruz, who, as Katy de la Cruz, would go on to greater fame on the world stage as a jazz and torch singer, honed by years of vaudeville experience in the Philippines.

She was born in Intramuros on 13 February 1907, although her roots are in Bulacan. Her father was a concierge at the Ayuntamiento Bldg., earning 30 pesos a week. At age 7, the streetsmart Catalina would go to the ferias around Intramuros and would steal the scene by singing songs while swiveling her hips to the delight of the crowd. People would throw her coins which she used to augment the meager family income. 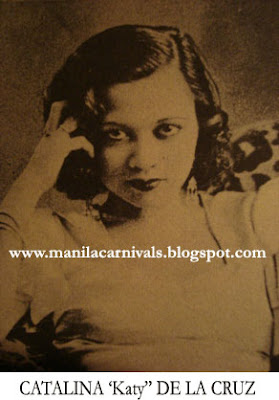 An American theater owner, Harry Brown , spotted the tyke and arranged to have her sing during intermissions while the movie reels were being rewound for playing at his cine houses. Thus, Katy de la Cruz’s career was launched, at a salary of 1 peso a week. Her father’s objection, however, forced her to go back to school, which she would not finish anyway. The family relented and young Katy was back on track of a new and exciting career.

At 10, she performed at the Savoy, later renamed Clover Theater. At 13, she made the rounds of popular movie houses: Cine Rizal, Cine Amor, Cine Gloria, Lux, Palace, Rivoli. Her raspy, gravelly voice became her trademark, which she learned from slurring the lyrics heard from scratchy Victrola records.

At age 21, to the consternation of her family, Katy eloped with Jose Yoingco, a pianist. Despite parental protests, they stayed together till Jose’s death in 1955. By then, ‘bodabil’ was at its peak and Katy found herself a leading vaudeville star, rivaled only by Diana Toy. Her chorus girls included Patsy, Chichay and Chuchi. 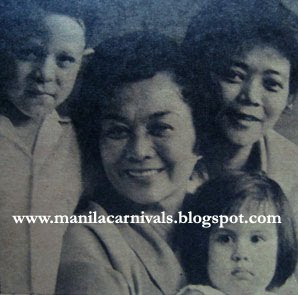 She was still in her teens, when, in 1924, she was nominated to be one of the candidates for Manila’s representative to that year’s search for the Queen of the Manila Carnival. After all, she was quite a looker, and she was described thus by an American fan: “..5 footer, 105 buxom pounds…dark olive skin…hell’s ember eyes”…

Married women then could join the contest and she found herself in friendly competition with such familiar personalities like Vitang Escobar Cowper, protege of John C. Cowper, dean of Philippine variety show. For awhile, it looked like Vitang, a singer-dancer, would be the most serious threat to Katy’s candidacy—she actually led her in the first counting, but Katy overtook her in the 2nd counting. In the final tally, however, votes for the more affluent Lolita Paterno came pouring in—“golpe de Paterno” was how the surge of Paterno votes, over 12 million in all, was described by media men covering the event. Katy wound up in second place with over 11 million votes. Pacita Serra, Marcelina Lerma and Vitang Cowper completed the top 5. 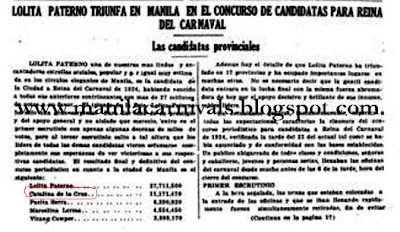 But Katy couldn’t possibly care: her career was on an upswing. She found an adoring American audience who took to her and her songs like “Planting Rice”, “Balut”, “St. Louis Blues” and “One of These Days”. She sang at the Elks Club, the University Club, the Army-Navy Club. Her international stints included performances in Honolulu and San Francisco where she was described as a “combination of Sophie Tucker and Carmen Miranda”. She also captivated Las Vegas in 1961, as well as Melbourne, Taiwan, Thailand, Hong Kong and Singapore. 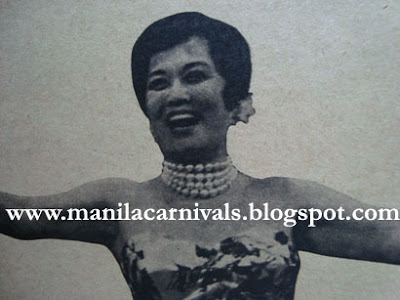 In between all these, Katy made movies and even won a Famas supporting actress award for her role in the 1953 movie, “Inspiration”. She retired in San Francisco with her four children. One daughter, Angie, teamed up with Nikki Ross and, as “Wing Duo” also made a mark in comedy-musicals in the 60s. 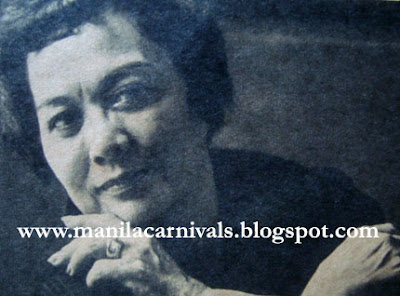 In 1989, the Cultural Center of the Philippines honored “Mommy Kate” with the staging of the musical “Katy”, based on her life. Maya Valdez portrayed her in the successful musical revue. She retired in the 1990s and passed away in California on 10 November 2004 at age 97. True, Katy de la Cruz was not fated to win the Queen of the Manila Carnival crown, but she earned a more enduring and iconic title—the Queen of Philippine Vaudeville.

Nice photos Alex... reminds me of Vernie Varga, the "Vamp" of our time. Thanks for sharing.

I can't even believe Katy de la Cruz was a candidate! Thanks, Ed!

In the picture is my sister Mary Anne Figueroa, and myself, John Figueroa. This is a very rare, long lost picture of my sister and I sitting with our Lola, Mommy Kate De La Cruz. She was simply inspirational to my brother, James Figueroa, and I becoming guitar players in the entertainment business. I miss her so much! I love her.

I should also mention that our aunt, Angie Yoingco is also n the picture as well. We called her "Nang-nang", and the name sticks till today as when we were children we could not pronounce "Ninang" (Tagalog for "Auntie")

As the grandson of a Philippine legend, I cannot stress strongly enough that my grandmother was INFLUENTIAL in the honing and sharpening of my brother and my musical skills. On the day she passed away, her entire family was there, and we bid a sad farewell to someone who not only was a loved relative, but someone who has touched the hearts of MILLIONS with her astounding talent.

I married her second daughter Veronica. I remember my mother-in-law as a loving, caring person who was always ready to help those in need. Mama lived in our home for 24 years until her passing. She will live forwver in our hearts. My wife Veronica was an original member of the Wing Trio which became the Wing Duo after our marriage.

I am so happy for your family updates and recollections of your Mommy Kate. The pics featured here were from an old issue of Sunday Times Magazine back in the 60s. Oh, I also remember her singing "Planting Rice", I remember the funny "Wing Duo" in some black and white comedy-musical, I remember those bygone days when talent was what mattered, and your Mommy/Lola Kate had it all. Salamat again.

Thanks for the wonderful blog and the beautiful photos! c",) I absolutely adore KATY DE LA CRUZ, having watcher her on stage, TV and film. Moreover, had the opportunity to work with her up close when we did the staging of the musical KATY!, where I appeared as her father.

Thanks for the visit, Bernardo and Aaron. I am sure the new "Katy" musical will rekindle interest in the life of this amazing woman who lit up the stage like a true star that she was. BTW, I have worked with your Bernardo Bernardo, many years ago--in my corporate shows for San Miguel Corp. where you ably hosted the proceedings!!