In revamping the educational system of the country, competitive sports and physical exercise programs were major integrations into the curriculum. Americans believed in the power of sports and physical education became a major tool in the subtle acculturation of Filipinos to American values. Sports provided a less militaristic approach towards instilling beliefs than subjugation through war. As Americans regarded Filipinos genetically inferior to merit self-rule, education via sports, could be a means to strengthen “muscle and nuts”, as opined by Dean C. Worcester in his recommendation of baseball as an ideal Philippine sports.

The Bureau of Education was also of the belief that “exercise is necessary to make Filipinos taller and bigger—that the stock of the race can be improved considerably despite many hindrances”. The Bureau regularly sponsored many regional meets, and by 1916, participants and winners were formally rewarded with academic incentives. The Bureau Director shared in the life-changing benefits of alternative sports to cockpit-loving Filipinos and that “this new spirit of athletic interest is actually revolutionary, and with it comes new standards, new ideals of character”.

THE SPORTS PROGRAM, for the 1908 Manila Carnival, featured games like American football, baseball and rugby.

It was no wonder then that when the first Carnival was initiated in 1908, a series of athletic competitions was planned, and the national fair managed to incorporate the Filipinos’ love of revelry while spurring regional rivalries in the sports spectacles.

The events in 1908, held in the specially-constructed Hippodrome, included inter-racial games like tennis, but also assumed white supremacy, holding separate competitions for Americans and Filipinos in disciplines like baseball and English football.

By 1912, the sports program had expanded to include men and boys’ baseball, basketball, volleyball, track and field, girls’ basketball, with open competition in swimming, tennis, rowing, golf, polo, soccer, football and bowling. In 1913, the baseball game between the Philippines and Japan evolved into the 1st Far Eastern Games under the leadership of the YMCA. 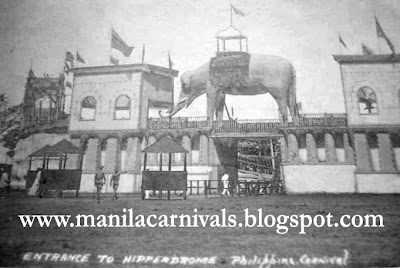 THE CARNIVAL HIPPODROME. Venue for the athletic and sports shows. Other sports disciplines that needed special facilities (e.g. swimming, basketball) were conducted in nearby schools and stadiums.

International competitions were intended to instill a greater sense of Filipino nationalism against foreign rivals, but racist practices persisted in the separate whites and non-white game structures. In 1909, invitations were sent out to Dutch, British and French athletes to participate in the games of the Carnival. Crack athletes from the United States Army were also strongly in evidence. A publication speculated that “it is also reasonably probable that the Chinese new military establishment will send to Manila a number of athletes who will constitute formidable rivals to the best that the ‘white man’ can produce in the Orient”.

For Filipinos, sports became a means to challenge the notion of white supremacy by establishing their own physical skills, which allowed them to gain self-esteem, cultural pride and create a greater sense of national identity. For example, in a 1915 volleyball championship conducted by the American-led Philippine Amateur Athletic Federation, Filipino clerks trounced their American bosses causing the latter to declare that the natives played deceptively, a behavior that was unsportsmanlike.

Despite these, sports continued to be a major crowd-drawing event in the Carnival, becoming larger in scale every year. In 1922, the Chairman of the athletic competitions, Fred O. England, announced the addition of cricket and trapshooting to the list of sports events, which were played mostly in the Carnival stadium, Nozaleda Park, American YMCA or at the polo club grounds.

The national championships of the 1935 Carnival was held under the auspices of the Philippine Amateur Athletic Federation with Dr. Regino Ylanan as Chairman. The world-class Jose Rizal Memorial Field was the venue of the sporting events, contested from February 3 to March 3. The disciplines included: baseball, track and field, soccer-football, swimming, fancy diving, water polo, volleyball, indoor baseball, bicycle race, boxing, wrestling, weightlifting, tennis, handball, gymnastics—plus the native sports of sipa and folk dancing.

In the years that followed, America’s sports crusade bore fruit, making the Philippines an athletic powerhouse this side of Asia, by dominating the early editions of the Far East Games, the pre-cursor of the Asian Games, against Japan and China. It also spawned sports icons like boxers Ceferino Garcia, the legendary Pancho Villa, Olympic medallists Teofilo Yldefonso and track stars Simeon Toribio, Miguel White and Miguel Nepomuceno. While Americans never managed to get rid of cockfighting, they introduced us to basketball, a game we, Filipino shorties, surprisingly embraced and excelled in. As they say, only in the Carnivals could one find the objects of a Filipino’s obsession: beer, beauty and basketball.