The Queen of the Manila Carnival and her retinue of princesses were not the only official royalties of the annual national fair. Local muses regularly graced the floats and carrozas of participating provinces. But other beauty titles were also conceived and contested by lovely nominees, as was the unusual case in the 1926 search for Miss Philippines—a “Miss Pearl of the Orient” title was hastily created and given to Carmen Fargas, who tied with Anita Noble twice for the crown, before placing a strong second in the final deliberation. The judges felt that she deserved a special title all her own.

In the very first Manila Carnival of 1908, there was a Queen of Peace, defended by the Constabulary and attended to by lions sleeping on her feet. Also appearing on the float sponsored by McCullough was the Queen of the Arts. Both however were allegorical royalties and were not true ceremonial figures.

There was, however, another beauty title, which, though lesser in importance, had enough prestige and significance to warrant its own eager public following. “Sultana del Pasig” was the title given to the muse of the city of Manila , and the prize was awarded, at least twice, during the Carnival years. "The Lady of Pasig" refers to a real Sultana, Kalangitan by name, and consort to Lord Lontoc, grandmother of Lakandula, King of Tondo, as recorded in the Malang Document of 1589.


The first Sultana del Pasig – Consuelo Agrava—was handpicked by city officials for her very apt beauty. As “El Renacimiento” reported, Miss Agrava, was “truly of the Sultana type, dark, with ojos de sulamita” (eyes of a peaceful woman). A spectacular float was made by her city exclusively for her, an Oriental pagoda featuring native nymphs positioned up front, in the act of rowing. Over the boat, large “tutubis” or dragonflies hovered around her, coming to life as the carroza was driven at the Hippodrome. At the poopdeck—the topmost part of the float—Consuelo did not sit, but reclined on a lounge—the dramatic pose of the sultana elicited much applause from an awestruck crowd. 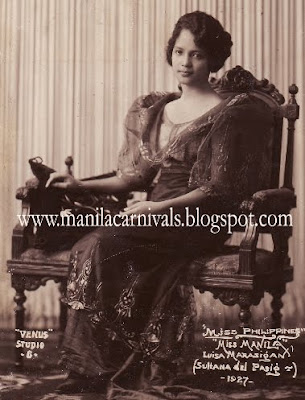 The second and the last time that the “Sultana del Pasig” crown was awarded, was in 1927--during the quest for the Manila representative to the 1927 Miss Philippines. The winner not only received the crown of “Miss Manila” but also automatically assumed the title of, “Sultana del Pasig”. The title went to a Tayabasin student enrolled in a Manila school, Luisa Marasigan, who went on to capture the national Miss Philippines crown.

Unlike today’s pageants where corporate and other special awards are freely doled out by the dozen, the royal Carnival titles of yore carried much honor and prestige, so much so that only few were privileged to wear them, making every reign, truly a rare and royal experience.
Posted by Alex D.R. Castro at 4:04 PM