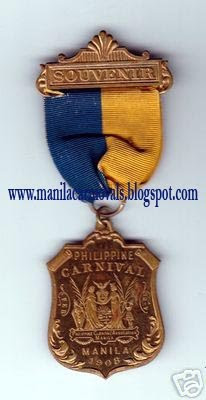 The Manila Carnival, being a national event full of sponsored activities, athletic competitions and other contests, warranted the production of medals and trophies that were presented to winners, corporate sponsors, stockholders and members of the media. The medals served many purpose—as a form of ID, as access to special boxes, as tokens of gratitude to donors, or, in the case of the contest winners, as badges of victory and honor. The Carnival years thus encouraged the flowering of medal art , and the prolific output turned out by metal craftsmen are sought after today as commemorative collectibles.

The designs of the medals, made from gold plate, silver, bronze or copper, were aligned with the visual themes of the Carnival. The very first medals for the 1908 Manila Carnival were produced by Schwabb S. & S. Vo. of Milwaukee, Wisconsin, U.S.A. It featured two ladies, representing America and the Philippines, in a friendly handshake, with a clown and a child reveler flanking them. The next year, until 1923, the Whitehead Hoag Co. of Newark, New Jersey crafted the Carnival medals. Heacock Company, which employed Filipino metal craftsmen, was also commissioned to make medals as early as 1921 but it was the taller de Crispulo Zamora (b. 1871/ d. 1922) that produced the most number and best-designed medals. 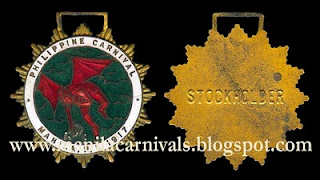 The art of metalcrafting ran in the Zamora family for generations. Before Crispulo, a Taller de Plateria, Escultura y Grabados was operated by one Tomas Zamora in Quiapo, a relative. Crispulo’s father, Mauricio, also ran an engraving shop in the same area, and he trained Crispulo early on by enrolling him at the Escuela de Dibujo y Pintura to study art. At age 21, he married Pelagia, herself an accomplished artist. When his father died, Crispulo inherited the business and cornered the market for military decorations like buttons and insignias for the Philippine revolutionary government. His engraving plant, the biggest in the Philippines, also made religious metalworks, plaques, school medals, presentation cups and trophies.


His works for the Carnival first gained notice at the 1913 edition, where he made a slew of trophies for contest winners and designed the magnificent crowns of the national beauty winners. In the years that followed, Zamora virtually had a monopoly of the medal commissions from the Philippine Carnival Association, and rightfully so because his designs were always striking and imaginative, often melding Art Nouveau, and later Art Deco with Philippine motifs like bamboo, anahaw leaf and Filipina maidens. Soon, even provincial carnival committees were calling on the Zamora workshop to create their own petit fair medals.


Leading artists of the day were also tapped to contribute like future National Artist Fernando Amorsolo, who is credited with styling the 1914, 1922 and 1927 medals of the Carnival. Medals were also enameled to give them color, and they are most valuable when the ribbon and the bar are intact. Some medals featured the Carnival mascots like the Red Devil and the Billiken, while others, harlequins and clowns. Keepsakes like commemorative coins and tokens echoed the same design elements.


In the waning years of the Carnivals, the medals became smaller and thinner but the standard of design quality remained high. Which is why, the Manila Carnival medals are valued today, commanding consistently high prices at local and international auctions. Once badges of honor, Carnival medals continue to be prized today, commemoratives that once marked an important timeline of our colonial history.
Posted by Alex D.R. Castro at 3:53 PM