99. On the Carnival Runway: FANCY DRESS AND COSTUME CONTESTS 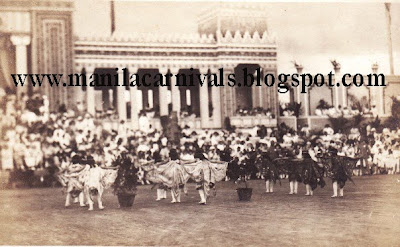 The Carnival beauties, the majestic floats and the spectacular foreworks and light displays were not just the visual stunners that drew crowds and invited rabid participation at the national event. The Fancy Dress Balls and the Costume Contests proved to be one of the more awaited events, a showcase of Filipino creativity at it most imaginative—in which adults and children show off their most original, most fanciful and most outlandish fashion creations in themed fashion competitions, befitting the wild, unbridled carnival atmosphere.


If one were to review the very first Carnival of 1908, it was in fact a one big costume and masquerade ball. The grotesque dances, pageants and processions had participants masked and dressed as harlequins, clowns and allegorical figures. The pageant that involved the Occidental and Oriental royalties featured characters dressed in formal raiments of the richest variety. Following the ceremonies, the evenings were lighted up “to show costumes, masks and masquerades”, leading to the Grand Masquerade Ball of Nations. Ethnic tribes like the participation of the Moros provided much local color, alongside cowboys, military soldiers and Indians.


Prizes were first given to costumed participants on the First Carnival Ball on 5 February 1908. On this night, loving cups were awarded to the most beautiful lady’s costume, the most beautiful gentleman’s costume and to the most attractive group. Gracing the first ever costume ball were the artists of the Italian Opera who happened to be performing in Manila that time. The opera stars regaled the audience when they escorted the Carnival royals to their thrones, wearing their fabulous costumes from the opera Aida.

The succeeding balls were a combination of both a masquerade and costume party, with the traditional unmasking happening at midnight. No one was allowed entrance unless he was suitably garbed in a costume. 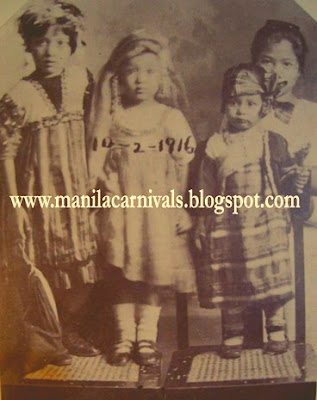 In the succeeding Carnivals, children were allowed to compete in a new category called Children’s Fancy Dress Parade. One of the prize winners in the 1916 contest were the Kalaw children, that included the future 1931 Manila Carnival Queen, Maria Villanueva Kalaw. She and her siblings Teodoro and Purita dressed up as Oriental royalties complete with veils and turbans, in costumes made from sinamay, designed by their mother, Pura Villanueva Kalaw. 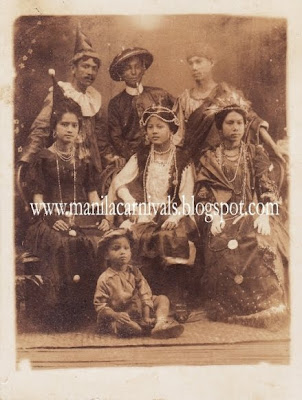 In the 1922 edition of the Carnival, the sponsored nightly balls also went thematic. For example, the Pan-Pacific Ball required guests to don Hawaiiana costumes. The other Comparsa nights gave prizes not only to costumed revelers but also to the “best impersonators of Clark Gable, Charlie Chaplin and Mae West”.

Towards the end of the Carnival years, the Fancy Costume Balls were tamed down; the last costumed Coronation Night was held in 1932 which had Emma Zamora and her court dressed as exotic Siamese royals. The next year, the Carnival Association eliminated the themed coronation program altogether, but even with costumes or without, the formal coronation rite retained its classy, glamorous style.