101. THE MUSIC OF THE CARNIVAL

Music was an integral part of the Carnival festivities—setting the mood, heightening the ambiance and providing great public entertainment. For the very first Carnival of 1908, Capt. Walter Howard Loving (b. 7 Dec. 1872/d.1945), the conductor of the Philippine Constabulary, specially composed a danza dedicated to the Carnival Association, entitled “Carnival Two-Step”.

Six years before, Capt. Loving, a Black American from Washington D.C. who had served in the Spanish-American War, had organized the Philippine Constabulary Band which won tumultuous acclaim at the 1904 St. Louis World’s Fair.

While the band was playing “William Tell Overture”, the electric power failed, plunging the exposition grown to darkness. Yet, the band, without missing a beat, played the rest of the music from memory, to thunderous and jubilant reception. 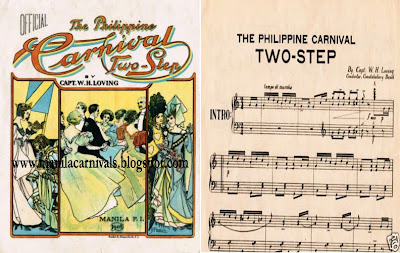 In the seminal edition of the Carnival, the hugely popular Grand Band Contest was introduced. The rules approved for the competition scheduled on February 27, 28, 29 and March 1 were as follows:

1. Bands will be judged according to the tune, conducting, execution, and interpretation.
2. Directors or owners entering the 1st contest (the proof of capability) should give the partitura (sheet music) of the music they will play to the Chairman of the Judges.
3. The last music to be played will be the “William Tell Overture”: the same partitura will be given to all.
4. The entrance fee of P20.00 is waived so as to enable everybody to enter the contest.

As expected, bands from every part of the land entered the competition. As always, there were picks and pans: Banda de Trozo (Tondo) played a selection from “Bohemian Girl”, but failed to rouse the crowd. Banda de Quiapo played accurately, while Banda Aguila, playing the “Overture of Semeramis”, did not allow all the instruments to shine. Pasig-based Banda Arevalo, conducted by Maestro Marisfoque, aptly chose “Escenas Pintoresques” by Massenet, which was excellently performed. Also well-applauded were the constabulary bands of Albay and Iloilo.

In the end, the Board of Judges, chaired by Antonio Garcia, gave the top prize of P500 to Banda Arevalo which garnered 34 votes, just half a point from the joint bands of Iloilo and Albay. 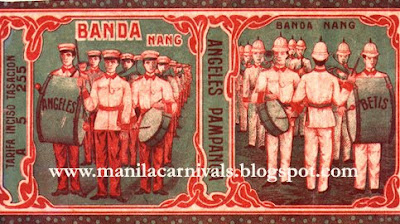 In the next Carnival of 1909, it was the turn of Pampanga to shine. The provincial government fielded a 32-member brass band from Angeles. Under the batons of Professors Higino Hererra of Angeles, Jose del Prado and Lucino Buenaventura of Baliwag and the generous sponsorship of Don Mariano Cunanan of Mexico, the band topped the national contest with their rousing number, “Crème de la Crème” by Tobani, played on French-made instruments.

Perhaps, the most exciting band contest was staged in 1932 where an all-female band, Banda Ligaya of Malabon, performed before an adoring public and bested the rest of the largely male brass bands, emerging as winners that year—a trailblazing triumph for Filipino womanhood. 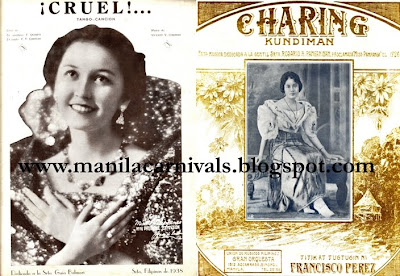 Throughout the years of the Carnival, the Carnival muses inspired artists to compose kundimans, danzas, love songs and other musical pieces as melodic tributes to the fair royalties. Music sheets were issued in honor of Queens Luisa Marasigan, Monina Acuña and Guia Balmori but even outstanding provincial delegates were honored with songs composed and published by ardent admirers.

The stirring sounds of the Carnivals were finally hushed in the 1939 Philippine Exposition, but the sight of the country’s most talented brass bands, conjuring music with their polished instruments while looking sharp in their crisp, military uniforms, will always be associated with our greatest, grandest national past time.
Posted by Alex D.R. Castro at 4:02 PM