1932, DR. ARTURO Cabarrus DE SANTOS, King Consort of Queen Emma Ruiz
Arturo was the son of Jose Santos and Concepcion Cabarrus of Manila. He had a brother, Alberto and a sister, Alicia de Santos, the original Miss Luzon in the 1931 court of Maria Kalaw, who resigned her title.
Arturo was born in Manila in 1912. He took up Medicine at the University of Santo Tomas and it was as a medical student that he was asked to be the King Consort of the queen-elect of the 1932 Manila Carnival, Emma Zamora.

Arturo combined his love for science and the creative arts. He was also practicing medicine when, from 1939-40, he went to New York to study painting and metalcraft at the Columbia University. When Word War II came, he rendered service with the Red Cross and with the American Navy as a surgeon.

After the War, he dabbled seriously in the decorative arts which soon became his main vocation, designing the interiors for 12 houses of members of prominent Philippine families. From 1959-1960, he was in Hong Kong, doing the interior design of the partly-Philippine owned Ambassador Hotel, which, at that time was one of the most modern hotel in the colony.

It was his stay in Hong Kong that spurred his collecting interest in Chinese ceramics and furniture. He became an accomplished interior designer and his services were sought after by many high society families, including the First Lady, Imelda Romualdez, for her many building projects. An aesthete, he also collected Philippine sacred art, santos, paintings, pre-colonial jewelry. He housed his collection in a pre-war European style house that he owned. In 1966, he offered his collection to the Cultural Center of the Philippines, making the offer through the architect Leandro Locsin, who designed the Center
When he passed away on 26 February 1996 without a direct heir, he bequeathed his fabulous collection of pre-Colonial and colonial art to his cousin Pacita de los Reyes, the 1929 Miss Philippines.


1933, DR. GREGORIO Y. ZAFRA, King Consort of Queen Engracia Laconico
Lipa-born Gregorio Y. Zafra and is the country’s most accomplished scientist. He graduated with a Mechanical Engineering degree from the Massachusetts Institute of Technology in 1926. The next year, he earned his Masters in Aeronautic Engineering from the University of Michigan, and then in 1930, his doctorate in Physics from Sorbonne in France. He went back to the Philippines and his off-scientific pursuits included providing escort duties to the 1933 Miss Philippines, Engracia Laconico, a family friend. He married her a year later.

As a physicist, he discovered the physical law of kinetic resistance, now known as the Zafra effect. His inventions include the 2-way TV telephone or videophone (1955), improved solar energy designs for the sun stove, solar battery and solar water heater, an alcohol-fuelled airplane engine, a propeller-cutting machine and helped in building the robot Marex X-10.

For these pioneering works, he was given the Distinguished Service Medal in 1959. In 1966, he received the Presidential Gold Medal and Diploma of Honor for Science and Research and the Cultural Heritage Award for Science Education and Aero-Engineering.His highest accolade was the National Artist Award in 1978.

OTHER ESCORTS:
Hector Gomez ( Escort, Luisa Laconico, Miss Luzon)
A real-life romance bloomed between Hector and Luisa, and they were married after the Carnival at the Quiapo Church. 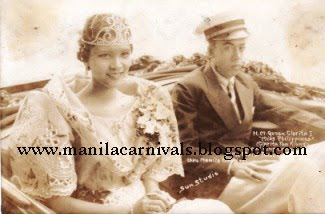 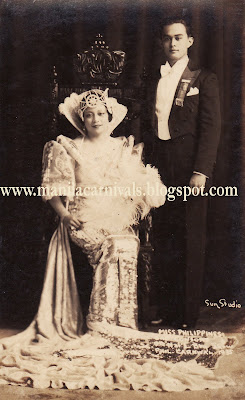 1935, ANTONIO BAYOT, King Consort of Queen Conchita Sunico
He was the son of Jesus Ma. and Margarita Bayot. His siblings included Carmen, Raymond, Teresa and Josefina. Conchita Sunico was a cousin.

Pedro P. Chanco Jr., (Escort, Catalina Zabala, Miss Luzon)
The country’s foremost expert on tropical infectious diseases and parasitology was born on Rizal’s birthday, 19 June 1912 , hence his name –Pedro Protacio Pabalan Chanco Jr. He graduated from the UP College of Medicine (1937) and earned his Masters in Public Health (Tropical Medicine) from Tulane University in New Orleans in 1949. Upon his return in 1948, joined the UST College of Medicine, Microbiology and Parasitology as part of the teaching staff and as department head He was active in the Philippine College of Physicians and was also a member of the Royal Society of Tropical Medicine based in London. He was also the author of many scientific papers and textbooks dealing with his fields of specialization. He married Avelina Cabrera (b. 6 Mar. 1913) also a UP medical school graduate. The Chancos lived with their five children in Paco. Pedro Jr. passed away on 5 March 1997, and Avelina followed him shortly just 3 months later. One child followed in their footsteps by becoming a doctor, specializing in dermatology at Yale Medical School. Another son is the Philippine Star columnist, Boo Chanco.

(Many thanks to Mr. Boo Chanco for the information on his father, Dr. Pedro P. Chanco Jr.)

Jose Y. Feliciano, (Escort, Julieta Abad, Miss Visayas)
Jose Feliciano, a Tarlaqueño, was a member of the House of Representatives for the 2nd district of the province in 1949. Later, he headed the Rice and Corn Administration. In 1963, he was appointed by Pres. Diosdado Macapagal as Secretary of Agriculture and Natural Resources, till 1965. 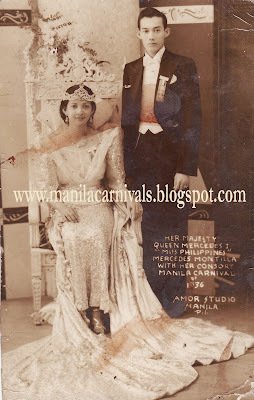 Ricardo Manotok, (Escort, Amparo Karagdag, Miss Luzon)
Ricardo (b. 1915) married Carmen Arguelles La O. He is better known as the father of Tommy Manotoc, the former husband of Aurora McKenny Pijuan, 1970 Miss International, and Imee Marcos. He publicly accused the Marcoses when Tommy was “kidnapped” in 1982. Another son, Ricardo Jr. was also married to Chingbee Kalaw, daughter of former Carnival Queen consort Teddy Kalaw Jr. with Senator Eva Estrada. Their other children are Patricia and Guillermo.

Leon Ma. Guerrero, (Escort, Helen Bennett, Miss Visayas)
Born 24 Mar. 1915 to Dr. Alfredo Leon Guerrero, founder of the Manila College of Pharmacy and Dentistry and Filomena Francsico, the 1st Filipina pharmacist. Leon graduated summa cum laude with a Bachelor of Arts degree at the Steneo, then finished law with the highsets honors at the Philippine Law School. He became an award-winning journalist, diplomat and nationalist. He was an Ambassador to the Court of St. James, Denmark, Spain, Germany, India, Nepal, Norway, Sweden and other Central American countries. He translated Rizal’s works into English and wrote “The First Filipino”, Rizal’s biography. He has won the Premio Zobel, and accorded WWII Campaign medals and the Philippine Legion of Honor Award. Married Annie Corominas in 1938. Married Margaret Burke of London after his first wife’s death with whom he had a son, advertising executive David Guerrero. He died 24 June 1982. 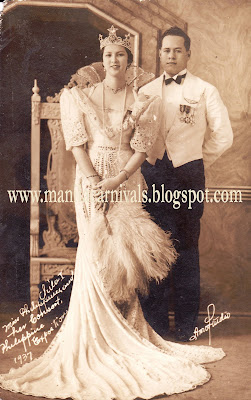 1937, COL. ANTONIO ARNAIZ, King Consort of Queen Carmen Zaldarriaga
Col. Antonio Arnaiz was already an acclaimed personality in the field of aviation when he was chosen to escort the 1937 Miss Philippines, Carmen Zaldarriaga. He, together with Juan Calvo, made the pioneering Manila- Madrid flight in 1936, a first in Philippine aviation, now known as the ‘Arnacal Flight’.

Antonio was born to a hacendero family of prominence in Bais, Negros Oriental. His parents were Tomas and Agueda Arnaiz, whose other children included Francisca, Luis, Maria, Emiliano and Lolita. He studied at the Dallas Aviation School in the U.S. and in 1936, made plans to mount a trans-Atlantic flight. He rallied family and friends like Carlos P. Romulo and Federico Calero to fund this ambitious project, the money of which was spent in refurbishing his Fairchild plane.

On 29 May 1936, aboard their plane re-christened “Commonwealth of the Philippines”, the Antonio and Juan took off from the Nielson Airport at 5 a.m. and arrived in Hong Kong later in the day where they were welcomed by an enthusiastic international crowd .The two Filipino pilots landed in Barcelona on 11 July and proceeded to Madrid, touching down at 5 in the afternoon. The welcome was tumultuous; they were wined and dined and were honored with a bullfight to toast their aerial achievement.

When they returned to the Philippines on 8 September 1936, the two were treated as heroes and were promoted to Lieutenant Colonels in the new Philippine Army Air Corps by President Manuel L. Quezon. Their historic flight was commemorated with a special stamp issued that year.In early 1937, Antonio was selected to become the King Consort of fellow Visayan belle, Carmen Zaldarriaga. Romance bloomed between the two and Antonio and Carmen eventually got married, begetting five children. Antonio went on to earn a doctoral degree in aeronautics engineering and served as the Vice President and Director of the Philippine Aviation Corporation.

Antonio died in 1979, many years ahead of Carmen. In his honor, the old Pasay Road was renamed Arnaiz Avenue. This road crossed Makati Avenue and Paseo de Roxas, once the runways of Nielson Airport, from where Antonio Arnaiz took off on an adventure that earned him a place in Philippine aviation history and in the heart of the 1937 Miss Philippines. 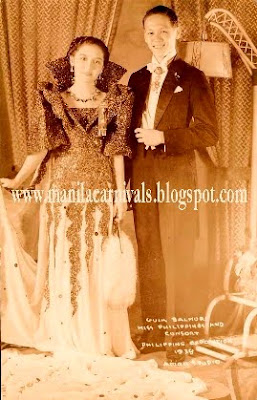 1938, ERNESTO Ventura SANTOS, King Consort of Queen Guia Balmori
Youngest son of Dña. Africa Ventura and Teodoro Santos of San Fernando, Pampanga. Valentin Ventura, the financier of Rizal’s El Filibusterismo was his grand uncle. Ernesto took up Industrial Chemistry at the University of the Philippines. He married Tessie Revilla, whose parents, Florentina Goyena and Jose Revilla were in the royal court of Carmen Prieto as princess and escort respectively. Their daughter, Tina Santos, was once a sought-after model and a top international ballerina and ballet choreographer. 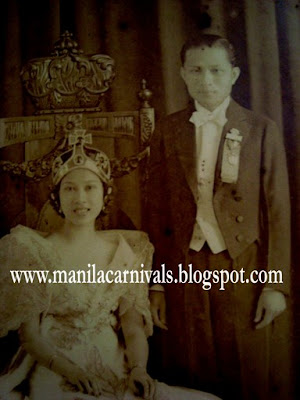 1939, RAMON Calleja FERNANDEZ, King Consort of Queen Iluminada Tuason
Ramon Fernandez (b. 16 February 1916) was originally from Libon, Albay, the eldest son of Bartolome Fernandez with Pilar Calleja. His family owned and operated the Legaspi Colleges. He earned his Associate in Arts and his Bachelor of Laws degree from the University of the Philippines, the valedictorian of the 1939 class which included his classmate Ferdinand E. Marcos. It was at the state university that he was asked to render escort duties to the 1939 Miss Philippines, Queen Iluminada Tuason whom he eventually married.

After placing 2nd in the bar exams, he practiced law and became a law professor at his alma mater, as well as at the Manuel L. Quezon University and the Philippine Law School. He was appointed by Marcos as Undersecretary of Justice, a post he held from 1968-1971. He was appointed as Associate Justice of the Supreme Court in 1977. He took a second wife, Lydia Seva after Iluminada’s death. The distinguished jurist passed away in 1997.