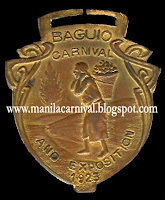 To celebrate the 300th anniversary of the settlement of Baguio by the Spaniards (1623-1923), the city government of Baguio organized the 1923 Baguio Carnival and Exposition, the first since the 1915 Benguet Carnival. The fair was scheduled from April 21 to 24, at Burnham Park, timed at the height of the lowland summer heat, to entice visitors to cool off their heels and enjoy the “wonderland city a mile above the sea; this city without noise, withour factories, without dust”, as Mayor E. J. Halsema proudly touted.

He added in his personal invitation: “Naught but peace will greet you; peace and the hospitality which is a tradition in this mountain capital. The cool fragrance of spicy pines; the beautiful fern-bordered roads; the frosty evenings tempered by the grateful glow of pine logs blazing in great fireplaces”.

The main feature of the exposition was the rare convergence of the mountain folks of Northern Luzon—“the most picturesque hill people in the world”: the Kalingas, the Ifugaos, the Benguets, the Apayaos, the Ilongotes and the Bontocs. Much like how they were displayed at the St. Louis World’s Fair, the hill people in their native dresses interpreted their daily lives in constructed villages showing their typical mountain homes. Tribal dances and games, pony races and the people’s feats of prowess with the bow and arrow were featured during the gala week.

The exposition also showcased their industries that were long known to Chinese traders before Ferdinand Magellan came. Displayed at the fair for everyone’s admiration were various agricultural produce, metalworks in gold and copper, and handicrafts like woven products from Easter School—“the work of Igorot boys and girls”. 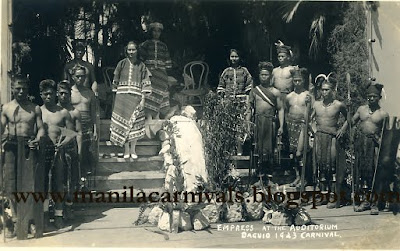 Crowned Queen of the 1923 Baguio Carnival was the Ibaloi beauty, Martina Salming, of the prominent Cariño-Carantes clan. She was escorted by Dr. Hillary Klapp, a U.S. educated doctor of Igorot descent and a family friend of the Cariños. The coronation rites were held at a specially-constructed auditorium at Burnham Park. 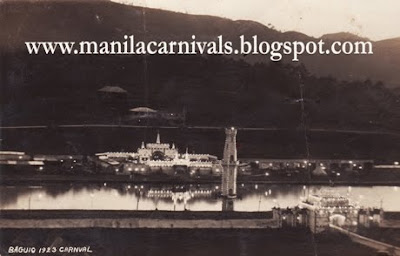 The City of Pines rolled out its red carpet to the throngs of visitors who made the 7 hour train journey from Manila to Damortis via the Manila Railroad. A pleasant 2 hour car ride on Naguilian Road finally led to the city—ready with ample accommodations, including half a dozen fine hotels (led by Hotel Pines and budget Mountain Hotel at 5 pesos a day), a spacious dormitory and a tent city with a 500 people capacity.

“You will leave our mountain city with regret, but with the glow of health on your cheeks”, Mayor Halsema promised. True enough, the 1923 Baguio Carnival & Exposition was a resounding success, a bolstering local tourism like never before and impressing the thousands of visitors who enjoyed “the carnival of merrymaking by day and by night”, to the hilt.
Posted by Alex D.R. Castro at 3:02 PM