While the carrozas of the carnival were providing attraction to the crowds that trooped to the streets of Manila, the Carnival kiosks, booths and pavilions were luring thousands of local and international buyers with their array of commercial, industrial and agricultural produce, presented in appealing, and often spectacular ways. 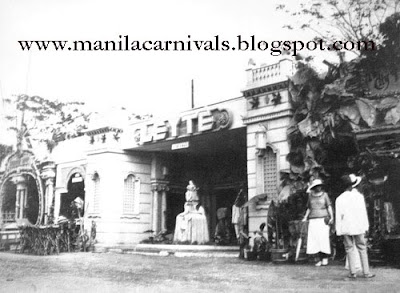 These commercial booths—as opposed to the booths of the insular government bureaus which were served as self-promotion for their public welfare work-- became even more important as the Carnivals downplayed the elements of merrymaking and emphasized the economic values to be gained from the commercial exhibitions. “The industrial benefit to result from this feature alone can hardly be overestimated,” the Philippine Magazine continued, “as it is a well-known fact that one of the greatest weaknesses of the industrial situation in the Islands is the misdirection of effort, which, if properly directed, would add millions to the annual possibilities of production”. 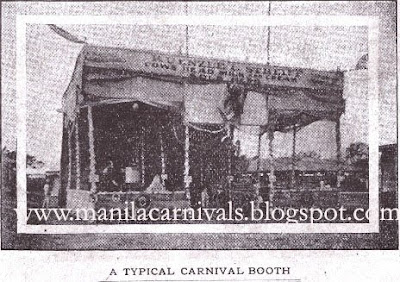 Thus provinces vied for attention through their gaily- decorated booths, ‘eye candies” to all who passed and stopped by. In the very 1st carnival for example, the Laguna provincial booth was singled out as “the envy of all”, what with its attractive and comprehensive presentation of its most notable products: coconuts, bananas, pipinos, mineral water from Los Baños and even pindang na usa. There was even a guest book for the signatures of visitors.

The “Palacio de Bulakan”, on the other hand, was made of nipa and bamboo, but the presentation of products—hats, silks, handkerchiefs, chairs—was disorderly. In this “palace”, the finest products of its major towns were displayed: Baliwag had its hats of uway, San Miguel de Mayumo had silleria de bejuco, while Malolos showcased its wine products and chinelas. Kalumpit’s attractions included mats, slippers and bibelots—of which many were sold. 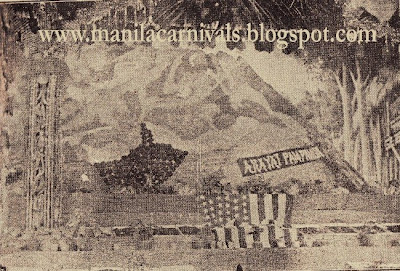 In 1912, Pampanga amazed the Carnival crowds with a prize-winning booth that featured Mount Arayat, a landmark of the province.

Not to be outdone were the booths set up by large business establishments of the country. In 1908, La Fortuna put up a booth that had a Goddess of Plenty figure sculpted by Romualdo de Jesus, showing the deity holding a cornucopia of sweets and pastries. The shoe store El Adelantado del Siglo, and the hat store, Silanganan shared a booth that had the Wheel of Progress, with the sun, moon and 7 stars. There were pillars on both sides of the door and all the signages were in Pilipino. 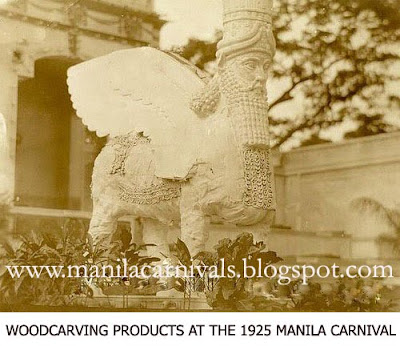 But even with such good intentions, the media had a heyday picking on the booths and their commercial exhibits. In trying to show the best of the Islands, our worst side was also unwittingly revealed. El Renacimiento, a leading newspaper of the time, ruefully observed:

“In all the palaces, pavilions in miniature and the cockpit coliseum, the cult of vice is shown in all its splendor.
Bar, canteen: beer is the queen.
This City has no capitol, only a headquarters.
Music is forever playing. Ears are deafened.