As paragons of Filipina pulchritude, the Queens of the Manila Carnival were also looked at as icons of fashions, and the royal crownings and parades gave their fans the special chance to assess their queens’ sartorial sense. The costumes and fashions of the candidates mirrored the prevailing tastes and social mores of the times, but a few dared to cross the bounds of conventions with creative stylings of our national formal wear. 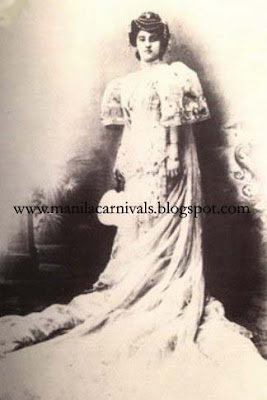 In the 1908 Manila Carnival, the Oriental Queen awed the Carnival audience by coming to her presentation night dressed in a reconfigured baro’t saya. Pura Villanueva’s mother, the highly skilled Emilia Garcia, sewed the unique creation herself, completely removing the panuelo from the ensemble. Fashioned from piña and fine sinamay gauze, the baro’t saya was then meticulously hand-embroidered by Emilia. A clever touch was the use of a Japanese fan as a fashion accessory, a symbol of the queen’s Oriental domain. When Pura showed up for the first time in this outfit, the reception was nothing short of spectacular, and newspaper accounts were one in saying the native wear became her. 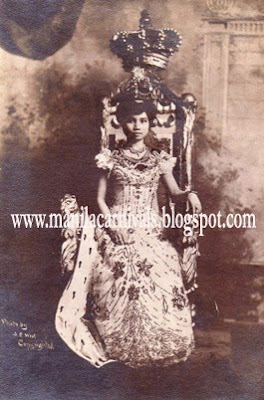 On the other hand, the next year’s winner, Julia Agcaoili made a complete turn-around by wearing a Western-inspired dress, an Empire-cut gown that was immensely popular in European countries, but the use of Filipina costumes made their return in the next editions of the Carnival, starting with the 1912 winner, Paz Marquez. 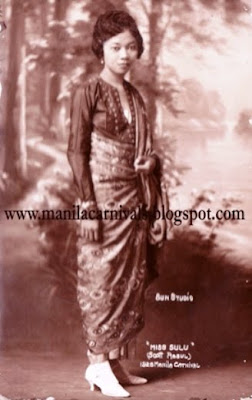 The regional winners wore their titles with pride, most especially the Mindanao muses. As early as 1912, the reynas of Mindanaw came to their coronations garbed as exotic Sultanas and Zoraydas in form fitting outfits matched by their court. Only a few Misses Mindanao winners (1931-1935) continued to adhere to this dressing tradition until the idea was abandoned altogether. 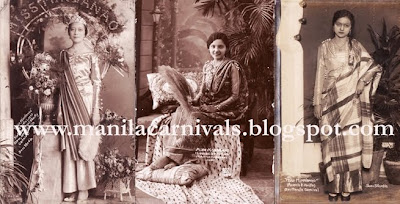 As mentioned earlier, the Coronation motifs were almost always thematic (e.g. 1915-Roman, 1922-Grecian, 1923-Russian, 1925-Egyptian, 1926-Hindu-Arabic, 1930-Siamese). There are pictures of the 1931 winners in Muslim dresses, but these may have been just for one pageant presentation. In 1929, the event had a Sea Fantasy theme complete with a Poseidon character. Pacita delos Reyes wore a Graeco-Roman inspired gown with thousands of seed pearls dangling in front, true to her being a “pearl of the Orient Seas”. All these elaborate costumings were to give way to more traditional dresses in subsequent Carnival outings. 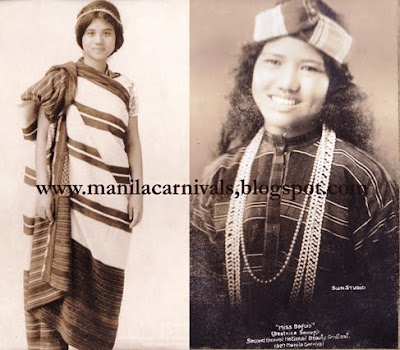 In 1926 and 1927, when minority candidates from the North and South came to compete in Manila, they made clear to the crowds their provinces of origin by coming in regional ethnic costumes.The 1927 Miss Mountain Province, Juliet Linney and Miss Baguio Beatrice Sanup came in Igorot costumes, made of indigenous woven fabric. Scott Rasul (1926 Miss Sulu), Bala Amai Miring (1926 Miss Lanao), Manuki Makarimbang (1927 Miss Lanao) wore colorful malongs. 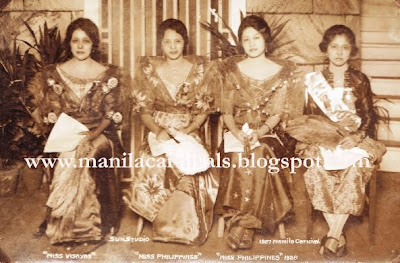 The 1927 Miss Mindanao winner, Nora Maulana of Sulu, stood out during the Coronation Night, resplendent in a Muslim costume and looking very much like a Mindanao princess. While the rest of the winners had flowing serpentina trains, she had a shimmering printed skirt that ended at her ankles. Her other official pictures show her in batik tops with rich with patterns traced in sequins and beads and Muslim-style skirts, with a manton draped over her shoulders. 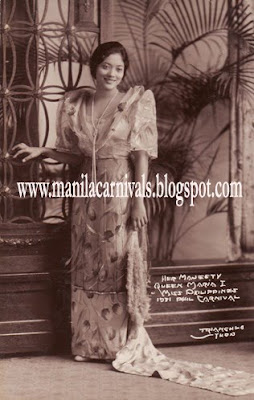 The 1930s showed the emergence of Philippine haute couture from the atelier of the most eminent designer of the time, Dña Pacita Longos. She revolutionized the terno by removing the tapiz which facilitated mobility of the wearer. For the 1931 Queen, Maria Kalaw, she designed a modern, yet beautiful burnt orange and black terno that wowed the crowds gathered at her presentation at the Carnival Auditorium.

After 1935, fancy costumes were dispensed with altogether, with ladies preferring to don more modernized versions of the terno—some modified in one streamlined piece, others with peplums, fluffed up with petticoats, and embellished with appliqués, ruffles, lace and embroidery. 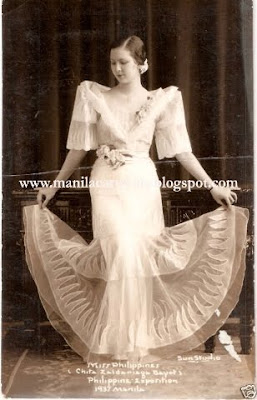 By 1939, the long, unwieldy train had disappeared altogether with more volume added to the skirt’s silhouette. But sadly, even the sight of fashionable Queens dressed to the nines on their royal thrones and carrozas could save the day for the Manila Carnivals, which, plagued by lackluster support and fundings, were no more by the turn of a new, but turbulent decade.
Posted by Alex D.R. Castro at 4:38 PM