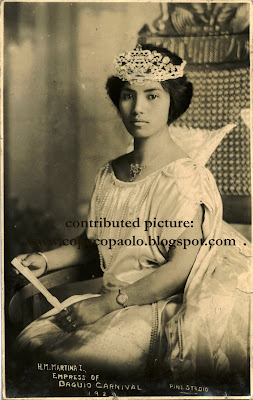 The chosen Queen who ruled over the festivities of the 1923 Baguio Carnival was a local beauty with a distinguished Ibaloi pedigree. Martina Salming was born in 1902, to Ibaloi baknang Salming Piraso and Sabina Cariño. Her parents, though illiterates, recognized the value of education, allowing their firstborn to study under the CICM missionaries, who later would found the premiere school of Baguio, now Saint Louis University. As fate would have it, Tinang, as she was called, lost both her parents shortly, and came to live with her aunt Josefa, who took her in her household and gave her work in the Cariño farm. She would later be adopted by her uncle, Dr. Cariño, who treated her as if she were his own. Tinang endeared herself further to the family by saving the good doctor from a lawsuit filed by an Ilocano house help who died in a fire that started in the Carino home. Her testimony-in which she said that the fire was accidental-- led to her uncle’s acquittal.

Tinang was in her early 20s when she was considered for the Carnival queenship. It was said that her dusky, exotic looks could pass for an Indian, Cherokee, Arabian or a typical Filipina morena beauty. Martina’s wide eyes, full lips, aquiline nose—not to mention her love and pride for things Ibaloi-- were not lost on the selection committee who awarded her the title of 1923 Baguio Carnival Queen. 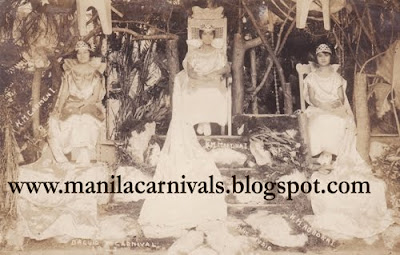 For her grand coronation at the Burnham Park, the Queen wore a “livit”, a traditional native Ibaloi costume. On her side stood her accomplished escort, the popular Dr. Hillary Clapp, an Igorot adopted by an American couple, and originally named Pitapit. He gave honor to his people by finishing Medicine from an American university. Dr. Clapp was a close friend and colleague of Dr. Cariño and he agreed to become the King Consort to the lovely carnival royal. Martina was flanked by members of her court on both sides, also in native mountain costumes, complete with headgears, g-strings and tribal accoutrements like spears, bracelets and bangles. 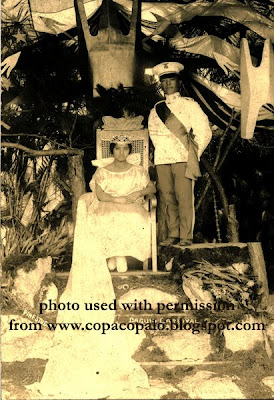 Martina wore a contemporary gown to her official functions. But unaccustomed to the trappings of ceremonial aristocracy, Martina—who always thought of herself as a farmer first—had to borrow pieces of jewelry to conform to the Carnival principles of pomp and pageantry. Though introduced to Western ways early in life, Tinang was a firm advocate of Ibaloi customs; she could perform the cañao for her ancestors and dance the ‘tayao” with utmost skill and grace.

After the dazzling Carnival days and nights were over, Martina met Juan Carantes, another Ibaloi baknang whom he married in the early ‘30s in a traditional wedding. The Caranteses lived briefly with Martina’s grandfather, Kiddit, before building a 2-storey house in Camp 7, on prime property inherited from Martina’s mother.

Their children came in quick succession: Andres (“Bigong”, still a practicing lawyer in his late 70s) , Mercedes (“Piting), Jacinta, Alejo (“Alex”), Urbano, Florita (“Warling”, born during the war hence, her nickname) and Inocencia (“Sweet”). The children grew up in the Carantes farm surrounded by fruit trees, garden plants and a menagerie of animals, which Martina cared for and tended.

Later, she was elected to lead a small community of the Camp 7-Loakan area as their barangay captain. On 1 September 1975, the City Government of Baguio gave her an award recognizing her contribution to the growth and development of Baguio through her socio-civic activities as well as her historic participation in the Baguio Carnival of long ago. 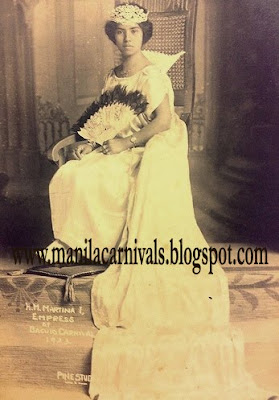 Acknowledged as a “living legend”, Martina Salming remained beautiful, the wisdom of years lining her face in the sunset of her life. She passed away at the Notre Dame Hospital in 1979, after a short bout with colon cancer. She was buried beside the house that she and her beloved husband built in Camp 7, in keeping with the Ibaloi customs and traditions that she loved, practiced and cherished.

(I am indebted to Gian Paolo Carantes San Juan, great grandson of Martina Salming for permission to use photos and information from his blog: http://copacopaolo.blogspot.com/. Many thanks, Paolo)
Posted by Alex D.R. Castro at 4:08 PM

Great history of Baguio's Carnival Queen...and family roots. The referred aling Camp 7 could be the house of the late Philip Carino?