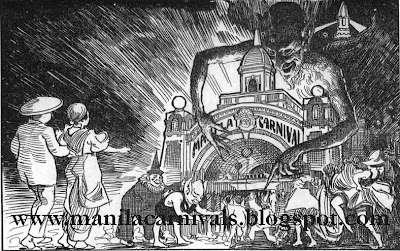 Fancy dress costumes and parties were known as early as the 15th centuryt in Italy, where the first masquerade balls were all the rage. These became so popular that similar events were opened to the public, in festivities marked with dances performed in attractive costumes. 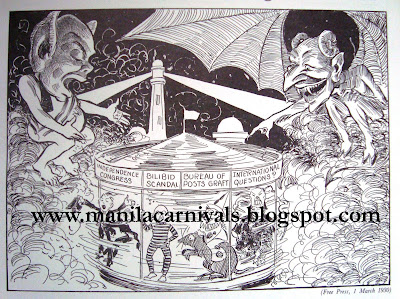 Nearby countries adapted these masked balls, but it was the 18th century Victorians who expanded and elaborated the concept of fancy costume parties. The favorite costumes of the day were Harlequins, Jesters, Tarts and Vicars—and the Red Devil. 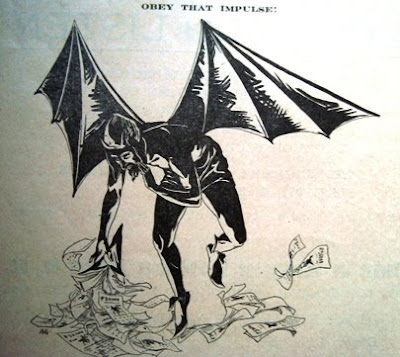 Red is the color most often associated with the Devil as it is the color of the fires of Hell, and is associated with lust, passion and excess. The Devil is also a symbol for a wild, uncontrollable spirit, chaos and the opposite of socially acceptable behavior, which aptly described the mood and ambiance of the Carnival. Hence, the Red Devil was adapted as one of the mascots of the Manila Carnivals, and the image of the grinning, be-winged red creature was extensively used in merchandising and promotions of the event. Revelers dressed as the Red Devils were seen on parades, or featured atop carrozas, thus perpetuating the mascot’s image. 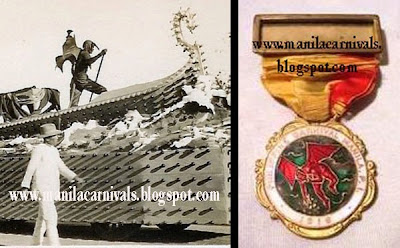 The Red Devil also made its appearance on Carnival medals, but the skew towards industrial and agricultural progress forced the Organizers to review the Carnival icons; the Red Devil (as well as the Billiken) was eventually replaced with more positive allegorical characters of progress e.g. women holding the rich harvest of the land, idealized Filipinas before expansive rice fields.
Posted by Alex D.R. Castro at 2:58 PM