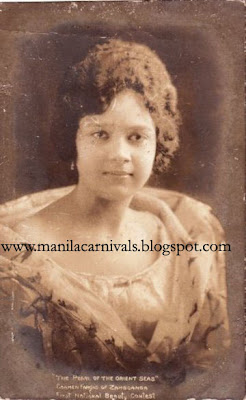 THE PEARL OF THE ORIENT SEAS. Carmen Caguiat Fargas, 1926 Miss Zamboanga. She gave the 1st Miss Philippines, Anita Noble, a stiff fight in the 1st National Beauty Contest of the Manila Carnival, that judges gave her a special title.

In 1926, the 1st National Beauty Contest was started, as a parallel pageant to the Manila Carnival Queen search. It was the first truly national quest for a queen as provincial representatives, each wearing the sash of their province, came to Manila to vie for the title of "Miss Philippines". It was also different in that, unlike Manila Carnival Queen which relied on public balloting, the selection was done by a panel of judges. 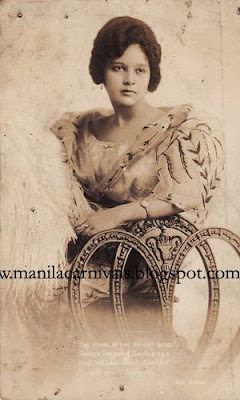 From Zamboanga came Carmen "Carmencita" Fargas, a mestiza beauty born on 16 January 1908 and bred in Aplaya, Ayala in Zamboanga. She was a student of Normal College when the contest beckoned, and was installed as an early favorite as the elected 1926 Miss Zamboanga. She found stiff competition from the 1926 Miss Batangas, Anita Noble, whose lineage included patriots and heroes from both sides of her family. But Carmen held her own, and as the judging reached its final stages, she found herself on top of the judges' list, a major contender for the crown. 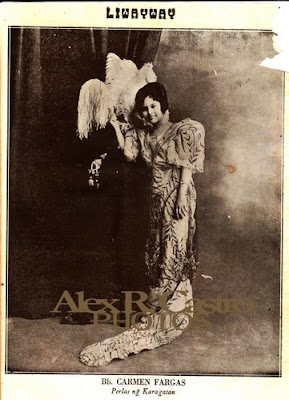 In the first ballotting, the regional winners were easily determined, but it was a deadlocked tie for the Miss Philippines crown--between Carmen and Anita. A 2nd balloting did not resolve the issue, and it was only past midnight when Pres. Manuel L. Quezon stepped in and offered suggestions to the tired judges for a quicker resolution to the problem. As related in the previous entry, a final scrutiny of the contestants was done, this time with another judge added. 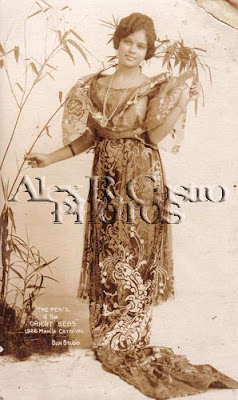 Thus, it was in this manner that the tie was broken--with Anita Noble pipping Carmen and emerging as Miss Philippines of the 1st National Beauty Contest. But so keen was the competition till the last minute that a special title --"Miss Pearl of the Orient Seas" (Perlas ng Silangan) was awarded to the equally deserving Carmen. At the proclamation of Miss Philippines, the Pearl of the Orient Seas also had her rightful place of honor. In the entire history of the annual Carnival, the 1926 edition was the only one that had 3 beautiful muses reigning together. 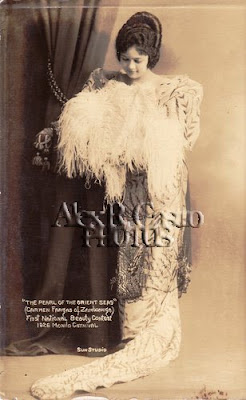 After the contest, Carmen went back to her schooling but her life was never to be the same again. Back in Zamboanga, she was caught in a whirl of activities-- attending provincial functions, crowning petit fair queens and participating in Rizal Day festivities. As Miss Zamboanga, she was succeeded by Manolita Villaescosa. 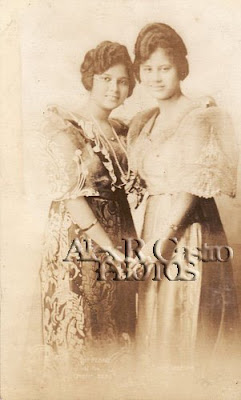 MISS PEARL OF THE ORIENT SEAS WITH MISS VISAYAS 1926, Carmen Fargas (1926 Miss Zamboanga) and Aurora Reyes (1926 Miss Samar)
Carmen managed to finish school and in her later life, she married Dr. Herminio Caguiat. Carmen was a whiz in the kitchen, both as a baker and cook. She was fond of Cadbury chocolates and enjoyed ice cream all her life. The beauty who almost became our 1st Miss Philippines passed away on 4 October 2004.

Interesting! Thanks for the pics. This lady was the half-sister to my grandfather (born to the same mother).