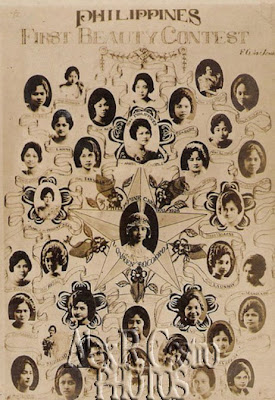 TWO FILIPINA QUEENS, ONE CARNIVAL. 1926 brought about major changes in the search for the Carnival royals. Another beauty pageant--the 1st National Beauty Contest--was launched alongside the quest for the Queen of the Manila Carnival, to boost revenues and renewed interest in the annual affair now on its 18th year.

Since 1908, the Queen of the Manila Carnival was elected by public balloting through the various publications of the time. But all that drastically changed in 1926.

To bolster the interest of Filipinos and generate more income for the Carnival coffers, the Philippine Carnival Association announced the creation of a parallel contest, a national beauty contest that would bring out the loveliest Filipinas from all over the country, from among whom the fairest from each region would be chosen and given the titles “Miss Luzon”, “Miss Visayas” and “Miss Mindanao”.

The loveliest of them all would be named as “Miss Philippines”—to be voted on by a panel of qualified judges noted for their social leadership. Culture, intelligence and integrity. In this manner, a true Queen of the Philippines—chosen from the ranks of the islands’ loveliest-- would emerge.

All provincial governors were thus apprised of this new mode of selection so that they could screen contestants in advance. The 1st Beauty Contest would run alongside the search for the 1926 Manila Carnival Queen which was still conducted in the same manner as the years past so as not to surprise the public. While the Carnival Queen had a Coronation Night, Miss Philippines and her court would have a Proclamation Night, in which the entire country would be involved by way of regional representations. In fact, so many came from the different provinces—literally from Aparri to Jolo—that the auditorium, though built larger than in the previous years, could not quite contain the crowd that came on the appointed day.

1926 saw the only time when two Filipina queens reigned over the Carnivals. As such, it was billed as Manila's Big Carnival of 1926. It was not to be repeated again. Although the two pageants shared equal billings, the “1st National Beauty Contest” overshadowed the Manila Carnival Queen quest, by eliciting more public excitement. 1926 would be the last time the title of “Queen of the Manila Carnival” will be given. Henceforth, only the title of “Miss Philippines” would be bestowed to the winners of the succeeding years.
Posted by Alex D.R. Castro at 4:21 PM