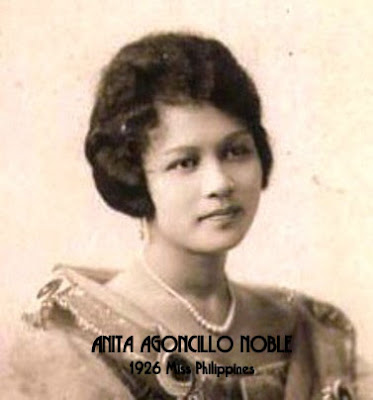 THE FIRST MISS PHILIPPINES. 20 year old Anita Agoncillo Noble of Lemery, Batangas, chosen at the 1st National Beauty Contest of 1926. Anita comes from a distinguished family of patriots and revolutionists.

The 1st National Beauty Contest search for the first Miss Philippines was launched with much fanfare and was met with resounding approval by provincial authorities. Quickly, municipalities conducted their own “Miss”, from among whom a provincial bet to the national contest was chosen. Batangas Governor Modesto Castillo however, already had a perfect candidate in mind, so he scrapped the local tilt and named his beauty of choice. No one criticized this arbitrary move, as his decision was met with unanimous approval. Anita Noble y Agoncillo of Lemery was named as “Miss Batangas” and was sent off immediately to the national contest.

MISS PHILIPPINES, 1st National Beauty Contest Winner. All official pictures of Anita as Miss Philippines show her crown-less. She reigned alongside the last Queen of the Manila Carnival, Socorro Henson of Pampanga.

Anita was the middle child and only daughter of Leoncio Noble and Maria Agoncillo, who, in turn come from distinguished families of Lemery. Leoncio managed the family estate in the Lemery-Taal area, while Maria was directly related to patriots Felipe Agoncillo, diplomat of the 1st Philippine Republic, Maria, 2nd wife of Emilio Aguinaldo, and Marcela, maker of the 1st Philippine flag.

Anita had two other siblings: Froilan and Vicente. When it was time for their higher education, the boys were sent to San Juan de Letran, while Anita was accepted as an interna at the nearby Santa Rosa College. It was indeed a surprise, that given her strict upbringing, her parents allowed her to participate in the contest. But inasmuch as she was always in the company of other girls and their chaperones, she was allowed to participate in the contest activities.

BELLE FROM BATANGAS. Another official photograph of Anita Noble as Miss Philippines. Curiously, she is the only queen of the Manila Carnival who never wore a crown in her photo sittings.

During the contest proper, she stayed in the home of Mr. and Mrs. Alfredo Roa Sr., together with Remedios Santos (Miss Rizal) and Amparo Neri (Miss Misamis). Mrs. Conchita Zamora Roa was their official chaperone. One of the most memorable event was a tea dance party given by the Bachelors’ Club to the candidates at the Hotel de Francia along Avenida Rizal. The candidates were paraded in the evening in decorated automobiles that wended its way around Rizal, Escolta, Taft Avenue and ending at the Manila Grand Carnival auditorium at the Luneta. Alighting from the cars, the candidates boarded individual wheeled chariots bearing the name of their respective provinces. Before an adoring crowd and a panel of judges, the candidates were thus presented and voted on.

The selection of the regional winners—Misses Luzon, Visayas and Mindanao—proved to be easy. But the choice for the plum Miss Philippines title ended in a tie between Miss Zamboanga (Carmen Fargas) and Miss Batangas (Anita Noble). Not even a second voting could break the tie. As it was already past midnight, Madame Levy, one of the judges, suggested the postponement of the deliberation for another day. It was then that President Manuel L. Quezon made his appearance. Apprised of the situation, the President invited the contestants the next day at the Manila Hotel. He stipulated that they be dressed in simple baro’t saya and wear no make-up, and that another judge be added to break the deadlock. The judging continued the next day—the girls were judged how they ate lunch!

The stringent process finally yielded results with the breaking of the tie. Anita Noble, 20 year old Miss Batangas was chosen as the winner of the First National Beauty Contest. But so tight was the competition, that the Carnival officials decided to create another title for Zamboanga’s Carmen Fargas. She was named as “Miss Pearl of the Orient Seas”. Named as Miss Luzon was won by Rosario Genato (Manila), Miss Visayas was Aurora Reyes (Samar) and Miss Mindanao was Bala Amai Miring (Lanao). 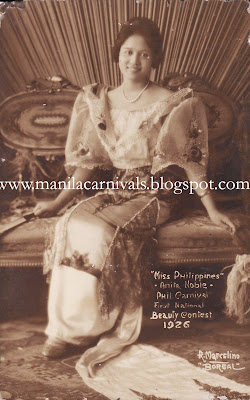 Our first Miss Philippines was proclaimed with much hoopla in the jampacked Carnival Auditorium. Batangas Assemblyman Antonio de las Alas escorted Anita, the pride of Batangas, to the throne. Leopoldo Kahn stood by as her King Consort. With the dancing ending at 5 a.m., everyone agreed that 1926 was “the liveliest and most successful night in the history of the Carnival”.

Accolades continued to pour in for Anita. Her school presented a musical program in her honor and when she went home to Batangas, her proud province mates gave her a rapturous welcome. She was besieged by admirers but it was not until 9 January 1927 that she met Paris-educated Architect Juan Nakpil, son of revolutionist Don Julio Nakpil and Gregoria de Jesus, the young widow of Andres Bonifacio.

As a graduate student of Harvard where he continued his studies after France, Juan had previously heard of Anita via Carnival news clippings sent to him. Upon his return to the Philippines, Juan met Anita on the feast of the Black Nazarene, in the Quiapo house of his uncle, Dr. Ariston Bautista Lin.

ALL IN THE NAKPIL FAMILY. Anita and Juan had 3 boys in succession: Ariston, Francisco (who had just received their First Communion in this picture), Eulogio (standing in front). Annie sits at the right, and youngest Edith is on her mother's lap. taken in 1936.

Smitten, Juan pursued Anita, often traveling to Lemery every Sunday to woo and visit her. He finally won her on 10 December 1927, and they were wed in the evening highlighted by a reception held at the house of the Batangas Governor. The union bore 5 accomplished children: Ariston, Francisco, Eulogio, Annie (who became Miss Batangas) and Edith (who, too, became Miss Philippines 1955 of the Boys’ Town Carnival).

ANITA'S BOYS. With two of her boys, first-born Ariston and 2nd son Francisco. Still every inch a beauty, Anita was in her late 20s when this picture was taken. 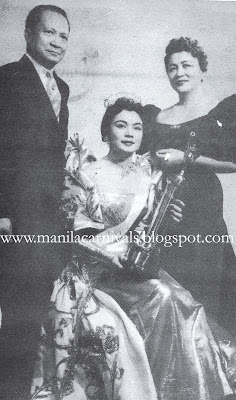 LIKE MOTHER, LIKE DAUGHTER. Daughter Edith Nakpil, like her mother, won the "Miss Philippines 1955" title at the Boys' Town Carnival. Edith is flanked by proud parents, Juan Nakpil and Anita Noble-Nakpil.

In 1973, Arch. Juan Nakpil was conferred the National Artist Award for his valuable contribution to Philippine architecture.Our first Miss Philippines, the accomplished and beautiful Anita Noble, passed away on 14 August 1979, after a bout with cancer.

Mrs. Edith Nakpil-Rabat, one of the daughters of Mrs. Annie Noble Nakpil, (and who is mentioned in your blog as well) passed away yesterday, August 26, 2009.

Mark, thanks for the update. Yes, I did read about her passing, and I clipped her obituary. A most beautiful Miss Philippines herself...

I'm proud to be Agoncillo :)

Proud to be one of her grandchildren...
My Auntie is also named after her, Anita Noble

I am sure you have woderful memories of your lovely Lola..

Hi,
I'm the apo of the youngest sister of Juan Nakpil. Lolo Juanito and Lola Aning also have an apo who won Miss Philippines Maja, from their son Eulogio Nakpil - Nena Barretto Nakpil. She is Cynthia Barretto Nakpil.