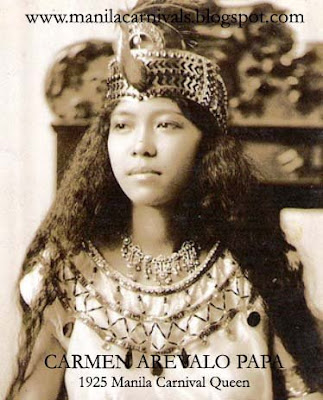 One of the most prominent winners of the Manila Carnivals was Carmen Arevalo Papa, the only daughter of Dr. Ramon R. Papa, who was a member of Quezon’s Philippine Independence Mission to Washington D.C. and Lutgarda Arevalo. Dr. Papa was also a popular figure, well-liked both among the galenos and among the politicians. He owned a range of businesses, running a drug store and several haciendas, and , at one point, was the head of a gold mining firm in central Luzon. Lutgarda died while giving birth to Carmen and an aunt took care of the infant. She grew in comfort, however, staying with his father on San Pedro St., now Evangelista, in Manila. 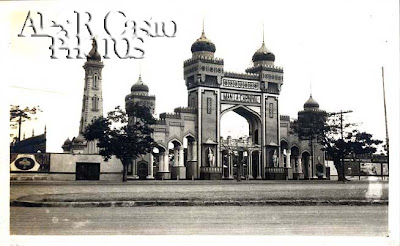 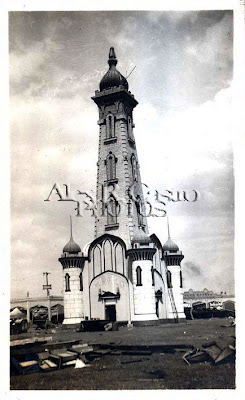 THE 1925 CARNIVAL TOWER. A Carnival mainstay is the landmark 6 storey tower. It followed the Moorish design of the main entrance.

On 19 July 1909, Dr. Papa married again, this time to Angela Montenegro. She looked after the motherless baby as if she were her own. Carmen was sent to St. Scholastica’s College and at age 19, she suddenly found herself a leading candidate of the 1925 Manila Carnival. She won the crown, and her stepmother helped her prepare for her night of nights. 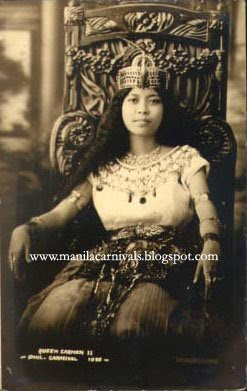 CARMEN AS CLEO. The queen of the 1925 Manila Carnival dressed like an alluring Egyptian princess, complete with an asp on her headdress.

WALK LIKE AN EGYPTIAN. Queen Carmen with escort Vicente Mendoza, at the Egyptian-themed coronation ball.

The Coronation motif was Egyptian and Queen Carmen II came as Cleopatra, complete with a crown topped by an asp and “bearing the scepter of Joy and Good Humor”. Her King Consort was Vicente Mendoza, who came dressed as a pharaoh complete with an head dress and ankh staff.

AGE OF PHARAOHS. The royal court of the 1925 Manila Carnival, attired in full Egyptian regalia during the Grand Coronation Night.

The royal court also came in full Egyptian regalia and the effect on the crowd was nothing short of spectacular. In the next balls, Carmen came in traditional baro’t saya that showed her real Filipina beauty.

Two years later, Carmen found herself meeting another Vicente—Vicente Delgado, a young lawyer from a distinguished Cebuano family. Vicente’s father, Tomas Delgado, was a former mayor of Barili, Cebu. The couple were married in a civil ceremony in Baguio on 1 May 1927, and their secret wedding became the buzz of the town and blind items started to appear in leading newspapers about the couple. Vicente left his bride and went back to Cebu to be with his parents. Finally, Carmen and Vicente squelched all rumors by getting married canonically at the San Marcelino Church, 2 months later, on 16 July 1927. (In 1930, their secret wedding was to have negative consequences with regards to family property, resulting in a court case between Carmen and his stepmother, Angela Montenegro).

HER MAJESTY, QUEEN CARMEN II. In one of her official portrait sitting, wearing a traditional Filipina costume and a rhinestone crown.

It was a good thing that Carmen and Vicente decided to live in Cebu, away from the unpleasant feelings the court case brought. From Barili, they moved to Cebu City to raise their 8 children: Lutgarda, Gualberto, Teodoro, Ramon, Milagros, Benjamin, Pacita and Ana Victoria. In later years, because Carmen still had land holdings in Manila, the Papas relocated to Makati to make supervision of their real estate business easier. 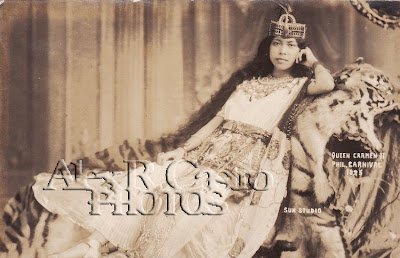 CARMEN'S CHARM, captured in a salon photograph, showing the Queen in character as an Egyptian royal.

In her later years, Carmen developed a devotion to Our Lady of Lourdes, even making a pilgrimage to France to seek help for her asthmatic condition. Her ailment grew progressively worse and on 7 June 1970, Carmen Papa, the toast of the 1925 Manila Carnival, died of asthma-induced cardiac complications at age 64.
Posted by Alex D.R. Castro at 12:21 AM