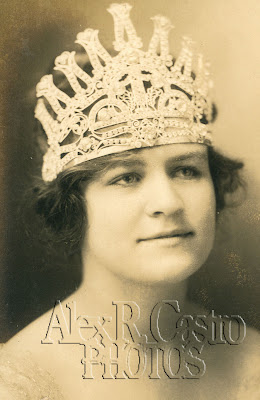 1920 QUEEN OF THE OCCIDENT. Virginia Harrison, daughter of Gov. Gen. Francis Burton Harrison, reigned alongside Trinidad de Leon, who was named Queen of the Orient.
The 1920 Occidental Queen who shared honors with the Oriental Queen was an obvious choice—she was Virginia Randolph Harrison, daughter of then Philippine Gov. Gen. Francis Burton Harrison with his first wife, the heiress Mary Crocker of San Francisco. Born on 21 Oct. 1901, Virginia had a sister, Barbara, and lived a life of affluence,. The family took residence in a posh address at Fifth Avenue, New York where her parents entertained lavishly.

At age 4, however, her mother tragically died in a car accident in Long Island, New York. It was said that she inherited 2 million dollars from her mother’s fortune, built on their real estate and property business. 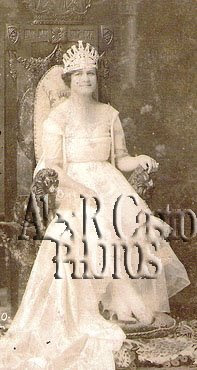 YES, VIRGINIA, SHE'S A QUEEN. Official portrait of Virginia Randolph Harrison as Queen of the Occident.

Her selection as queen of the most prestigious event in the country was a form of tribute to her father, who had quite a long tenure as governor of the Philippines (1913-1921) and who was well-loved by Filipinos. After all, he advocated the vision of giving Filipinos expanded roles in running the country. During his term, the number of Americans in Philippine government service was reduced drastically, with more Filipinos taking over their positions.

As an eldest daughter, Virginia acted like a First Lady to his father, joining him as a constant companion in official government and social functions. She also accompanied him in many of his out-of town trips to different parts of the Philippines and regular vacations to Baguio. 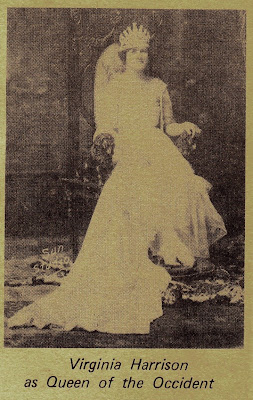 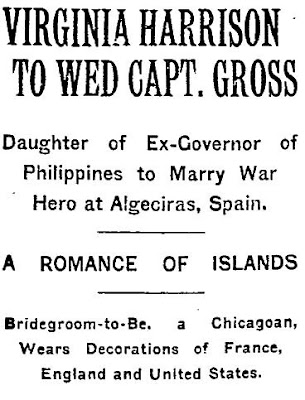 A year after her reign, she got engaged to Capt. Christian Gross whom she had met earlier in the Philippines. Capt. Gross, a native of Chicago, had been a war hero, with decorations from France, England and the U.S. for bravery during the War. At the time Virginia announced her engagement, Capt. Gross was studying at University of Grenoble, on a French-American scholarship.They were wed in 1922 at Algeciras, Spain, the country where former Gov. Gen Harrison chose to retire. But he would come back to the Philippines to marry for the 5th time—to a Filipina—and would be interred here upon his death, at the Manila North Cemetery.
Posted by Alex D.R. Castro at 9:38 PM