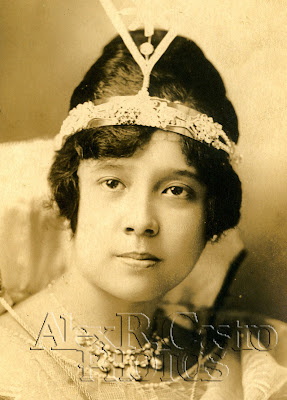 1920 QUEEN OF THE MANILA 'VICTORY' CARNIVAL. Trinidad De Leon y Roura of Bulacan, ta future First Lady of the Philippines and wife to Pres. Manuel Acuna Roxas.
The Manila Carnival started a new decade on a triumphant note, as explained earlier—and for this special Carnival edition, a girl of sterling credentials rightfully reigned as the Queen of the 1920 Victory Carnival. She was Trinidad Roura de Leon, the daughter of the very affluent Senator Ceferino de Leon of San Miguel, Bulacan and Maria Roura, a Catalan mestiza. She would not just reigned as a Queen but would also also become a First Lady of the Land, wife to Pres. Manuel A. Roxas. 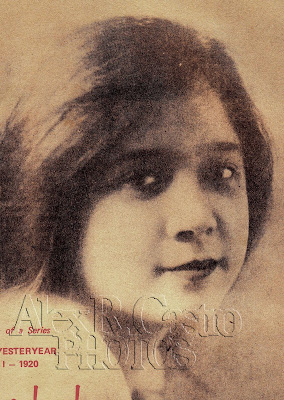 THE YOUNG TRINING, as a budding mestiza beauty.
In her time, Trining was considered one of the most gifted young women of Manila society, a combination of beauty, brains and a lively personality. Talented at a young age, Trinidad could recite English and Spanish poems, and could declaim at social events with aplomb. At age 6 though, Trinidad lost her mother and was thus raised by aunts who, nevertheless, showered her with affection. She started school at the Assumption Convent and later became an interna at St. Scholastica.

1920 QUEEN OF THE ORIENT. Trining wore a crown topped with the symbols from the Philippine flag: 3 stars and a sun, inside a triangle.
As a colegiala, she was persuaded to enter the quest for Carnival queenship. For the first time since 1908, two titles—Queen of the Orient and Queen of the Occident—were put at stake. The 16 year old Trinidad won and shared honors with Virginia Harrison, the American winner. In the dual coronation that followed, Trining wore a terno and a flowing collared cape. Her crown was banded tiara, topped with the triangle of the Philippine flag, set with a sun and three stars. Her consort was the handsome Ralph Earnshaw, son of the Manila mayor Tomas Earnshaw. 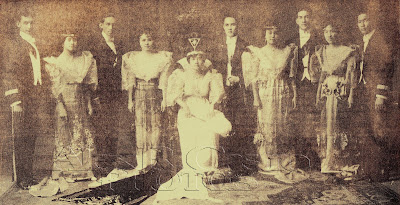 THE COURT OF VICTORY. Trining's King Consort was Ralph Earnshaw, whose father, Tomas Earnshaw was once the mayor of Manila.
Trining’s court of honor included Amanda Lichauco, Albina Tuason, Teresita Salgado, Felisa Limjap and their escorts Francisco Varona, Francisco Tecson, Alejandro Roces Jr. and Francisco Limjap. Many were certain that the very eligible Ralph would win Trining’s hand—he had pursued her even after the Carnival. But fate intervened when she met an up and coming politico from Capiz, at the house of one of her princesses, less than a year after the national Carnival. But she paid little attention to the young achiever named Manuel Acuña Roxas.

A year later, they met again at a grand ball held on Washington’s Day at the Philippine Columbian. By then, Manuel Roxas was already a Governor of Capiz. The governor danced the night away with Trining and the pair clicked. Pres. Manuel L. Quezon himself, encouraged and supported the match, thus their whirlwind romance was sealed.

The two were married on 14 April 1921 in a private ceremony in a chapel in Sibul Springs, Bulacan—which had been built through the efforts of Trinidad’s mother. The sponsors included Pres. Quezon and her former princess, Teresita Salgado. The newlyweds went home to Capiz in a special coast guard vessel and as when they reached Capiz and rode the streets, people cheered and showered them with flowers. Manuel Roxas would later become a Senate President, and then the first President of the Philippine Republic, a post he assumed from 1946 to his untimely death in 1948. 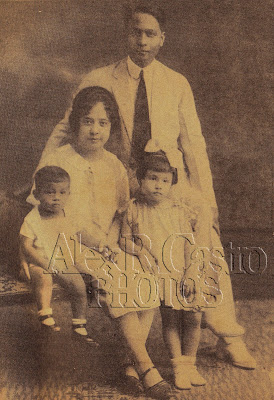 THE FIRST FAMILY. Trinidad and Manuel A. Roxas, together with their young children, Gerardo ( a future senator, married to Judy Araneta and father of Sen. Mar Roxas) and Ruby Roxas (married to Vicente Roxas).
Trinidad and Manuel had two children, Ruby and Gerardo, a future senator. In fact, Trinidad has the unique honor of having been a daughter of a Senator, wife to a Senator and a mother to a Senator. Today we can add one more title to complete this rare distinction: that of being a grandmother to a Senator--Mar Roxas, Gerardo’s son.
Posted by Alex D.R. Castro at 9:35 PM