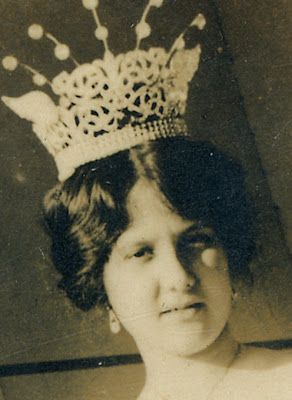 1916 QUEEN OF THE MANILA CARNIVAL. 16 year old Manolita Barretto y Delgado, an Assumption Convent student, at the time of her Carnival victory.

The Manila Carnival of 1916 proved to be another grand event what with petit carnivals spreading all over the country, fanning further the interest of Filipinos for the grand national pageant. Paco district, for instance, held its own carnival, featuring airplane stunts and other aero-acrobatics that were a hit in the earlier 1911 carnival.

MESTIZA BEAUTY. Manolita had striking Eurasian features that elicited adoration from the Carnival audince as well as her admirers.

To reign over the merrymaking, another Spanish mestiza was selected to become the Queen of the 1916 Manila Carnival. She was 16 year old Manolita Barretto, born at the start of a new century, the elder of two daughters of Don Alberto Barretto of Zambales and Dna. Bonifacia Delgado of Bulacan. Don Alberto was a former Secretary of Finance and had an executive position as president of Cebu Portland Cement. Bonifacia, on the other hand, was also well-connected. Her brother, Francisco, was a Senator and later became an Ambassador to the United Nations. Manolita had a younger sister, Maring, six years her junior. The two attended the Assumption Convent from primary grade to high school.

THE YOUNG MANOLITA. A fair complexion, a great form and figure and an impeccable lineage, characterized Manolita's winning beauty.

At the onset, the family didn’t seem too concerned about Manolita’s candidacy. Two avid promoters were Don Luis Yangco and Don Antonio Roxas. They worked hard to ensure her victory, and when she won, people took note of her beautiful Eurasian features, her form and figure-- striking even by today’s standards.

THE ROYAL ENSEMBLE. Jose 'Johnny' Chuidian escorted Manolita at her big night. She was attended by 2 page boys and a maid of honor.

Her sister Maring remembered her Coronation Night, at which she was the center of attention with the dashing Jose Chuidian as her King Consort. “Cannons boomed…there were dazzling display of fireworks..colorful costumes and brilliant dances”. She was in a European-style gown and a gem-encrusted crown while her consort wore a short cape over a white military regalia.

Thereafter, Manolita’s social calendar was always full, becoming a much-sought after invitee of Manila society. But three years after her reign, she turned her back on all these to become the wife of Augusto Gonzales, a scion of a prosperous family from Rosales, Pangasinan. (Augusto’s first cousin, Nieves Gonzales, was herself the 1919 Pangasinan Carnival Queen. She would eventually marry Manuel Moran, and their grandchild, Margie Moran would become the 1973 Miss Universe).

MANOLITA IN HER GOLDEN YEARS. Taken the year before her death, Manolita still retained her mestiza beauty that earned her fame and adulation at the 1916 Manila Carnival.

The Gonzales couple settled in bucolic Pangasinan to raise 4 children: Augusto Jr., Federico, Oscar and Lourdes. The marriage ended in divorce in 1927 and 5 years later, Manolita married Ramon Roces. No child was born from this union.