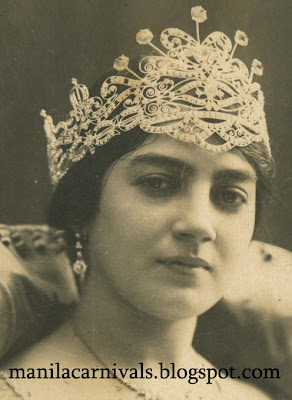 The Queen who reigned over the 1918 Manila Carnival was a distinguished Spanish-English mestiza who held a string of beauty titles even before her election. Enriqueta Aldanese had been the Queen of the 1st Cebu Carnival in 1914 and the following year, she became a “Dia España” muse in Zamboanga, an event mcuh celebrated by the Spanish community. This experience must have prepared her for a grander, more competitive pageant, for she eventually became the 1918 winner. 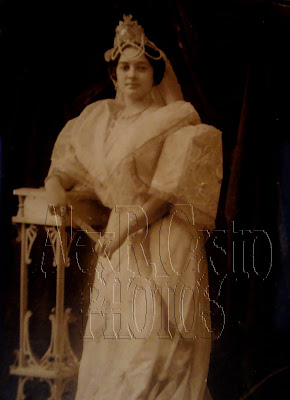 QUEEN OF THE CEBU CARNIVAL 1913-1914. The first of Enriqueta's string of beauty titles. Shown here as the 1st ever Carnival Queen of Cebu.

Enriqueta was born in Sibonga, Cebu to Carlos Owens Aldanese and Carmen Figueroa Lasso de Vega. She lost both parents while still young and came to live with her much older brother, Vicente Aldanese, a Customs official based in Zamboanga. Enriqueta attended convent schools in Cebu and later in Hong Kong. She followed her brother after he was re-assigned to Manila, and it was in the city that was invited to participate in the 1918 Carnival as a beauty candidate. Quickly, four newspapers backed her candidacy, and with such a strong support from La Vanguardia, El Ideal and Mercantil, she won as the 1918 Manila Carnival Queen.

THE QUEEN IN HER ROYAL ROBES. Queen Enriqueta I in one of her official portraits as the Carnival Royal.

The magnificent auditorium erected at Luneta was the site of Enriqueta’s moment of glory. She was escorted by Jose Reyes Galvez and assisted by two princesses and their consorts. She wore a heavy, velvet cape over her gossamer gown cut in vintage European style.

When the Carnival hoopla dimmed and faded, Enriqueta settled down on 19 March 1920, with Jose Paris, an electrical engineer of the Luzon Stevedoring Company. Jose had been one of the first to come a-calling at the Aldanese residence to congratulate the winning queen. They took residence first in Malate, then in Menlo, Pasay in 1929, where they raised three children: Manuel ( a doctor), Menchu and Ditas.

To raise the level of awareness of their children to world events, the family often went globe-trotting, exploring European countries like Spain even with a Civil War going on. With a feel for current world situations, Enriqueta was thus prepared when World War II struck the Philippines. She had stocked up on food and medical provisions for her friends and family, to last for many months. Though their home was bombed and damaged, the family remained unscathed and they proceeded to rebuild their lives after the war.

Her husband Jose, however, passed away of a heart ailment in March 1944, and outlived him for many years. In the 1980s, Enriqueta had to be hospitalized forvarious illnesses related to old age. Her niece, Pilar, the daughter of her brother Vicente, came to live with her in the same house that she has lived in for over 45 years. Some of her granddaughters like Meg Paris, became top models in the mid 1970s. Enriqueta lived to be in her 80s.