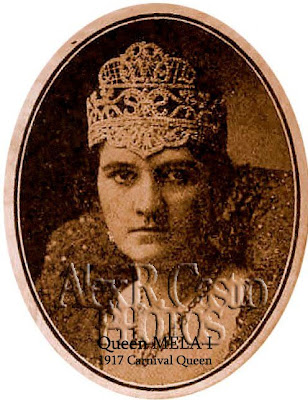 1917 QUEEN OF THE MANILA CARNIVAL. Mela Kamakee Fairchild was a daughter of mixed American-Polynesian marriage. She holds the distinction as the only American winner to reign solo at the annual Carnival pageant.

The first and only American to reign solo as a Carnival Queen was the exotic beauty Mela Kamakee Fairchild. Born in Oakland, California in 1898, Mela was a product of a mixed marriage, between George Hendrick Fairchild and Elisabeth Kamakee Cummins, a Hawaiian-American.


Mela’s father, Vermont-born George, had been an adventurous youth, coming to Hawaii to work on his uncle’s sugar cane plantation. After Elisabeth gave birth to Mela in the mainland, the couple returned to Hawaii. In 1912, hearing about the rich business prospects in the new colony that was the Philippines, George came over to set up the Hawaiian-Philippine Sugar Industry in Negros Occidental. He soon diversified into newspaper publishing, and founded The Manila Times, which proved to be successful. It was later sold to Alejandro Roces.

QUEEN MELA'S ENTOURAGE, included Major William Vaughn, whom she would later marry and divorce.
In 1914, Mela joined her parents in the Philippines. She quickly became a popular member of the younger set in Manila’s elite society. When it was time to nominate a candidate to the 1917 Manila Carnival queenship, Mela ran under the sponsorship of Cablenews-American, instead of The Manila Times of which her family was associated. She emerged victorious and reigned over the national pageant with an all-American court. 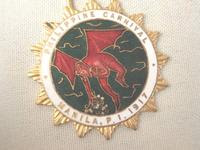 1917 CARNIVAL MEDAL, featuring the Red Devil, the mascot of the annual event. Medlas were given to major sponsors, various contest winners and participants.

Her consort was Maj. William Vaughn of the U.S. Army. A real-life romance bloomed, and they were married a year later. They had two children, Bradley and Lydia Fairchild. Their marriage ended in divorce and Mela remarried much later, in 1935, to Scot Gordon Mackay. Gordon was well-known to many Filipinos and counts Carlos P. Romulo (himself, married to the 1923 Carnival Queen, Virginia Llamas) as a friend. Mela and Gordon had a daughter from their union, Joan.

MELA AND GORDON MACKAY. When Mela remarried, it was to Scottish-American Gordon Mackay, a longtime Philippine resident and a good friend to many prominent Filipinos, inclduing Carlos P. Romulo.
Caught up in the terrible World War II, the Mackays were interred at the University of Santo Tomas. Upon release during the Liberation, they went back to the United States on the first army transport out of Manila. But they would later return to the Philippines which they have always considered home.

In 1965, while on a European tour, Mela fell sick. She was diagnosed to have cancer. She asked to be taken back to Manila where she died two years later. Daughter Joan first married David Anderson, and then Hamilton Powhatan Parrish and settled in the country that her parents have come to love, taking residence in Makati with her husband and children Linda Anderson, Robert and Peter Parrish.
Posted by Alex D.R. Castro at 6:39 PM

Thanks for pointing that out, Linda. My source for this was the magazine series written by Linda Flor in the 1970s. I will amend the feature.