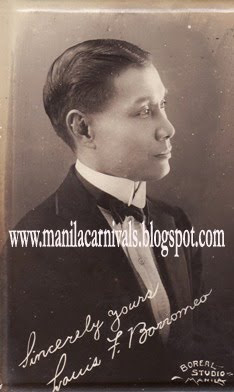 JAZZ THE WAY YOU ARE. Louis F. Borromeo of Cebu, came back after hitting it big in the American entertainment circuit, and introduced jazz music to the Philippines by way of his song-dance-circus-magic revues that livened up the Carnivals. Ca. 1922.

Luis Borromeo, originally from Cebu, was one of the first Filipino entertainers who made it big in the jazz music halls of America and Canada in the first decade of the 20th century. In 1920, Luis Borromeo returned to the Philippines, renamed himself Borromeo Lou, and put up a band that popularized classical-jazz music. This music genre found favor in the local entertainment circuit, which integrated such performances in the variety shows, which Borromeo later dubbed as “vod-a-vil” or ‘bodabil’, Filipinized from the French ‘vaudeville’. 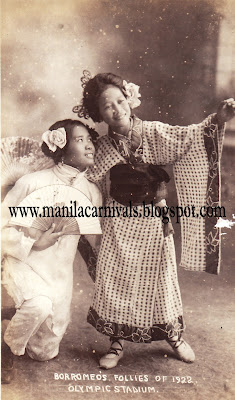 The enterprising pianist-impresario went beyond spreading his jazz music by establishing his own repertory of artists known as the “Borromeo Lou & Co., Ltd.” , which had magicians, dancers, acrobats, comedians, singers and musicians in its roster of performers. Soon, Borromeo Lou was being invited to grace important events and high society functions.

In 1922, Borromeo and his group was tapped by the Manila Carnival Association to provide entertainment for the 1922 Manila Carnival. He was thus introduced to the Carnival audience as “the originator and recognized King of Orientalized and ‘classic’ jazz, a pianist of rare skill and ability, and champion of all round mirth provoker of the Far East”.

Borromeo Lou and his group’s appearance as the star feature of the 1922 Carnival was made possible through a “royal appointment by her Gracious Majesty, the Queen of the 1922 Manila Carnival”, as hyped up in ads promoting the show.

The cast was headed by Borromeo Lou himself (“The Human Dynamo, Direcor and Classic-Jazz Pianist”), Miss Toytoy ( “The captivating China girl that has won the hearts of all Manila with her character songs and distinctive dances”), Datu Mandi (“The superb and inimitable Moro baritone who interprets with perfection the most difficult operas and sings the exquisite melodies of modern composers”) , Dudu (“The Moro Musician”) , Lucas )”The Miniature Harold Lloyd”) , Hayoki and Maruki San (“The Japanese Twins), musicians Sulubi, Baki and Swasing. Of course, Borromeo’s jazz orchestra, capable of “producing about 240 jazz explosions per minute”, topbilled the Carnival show. 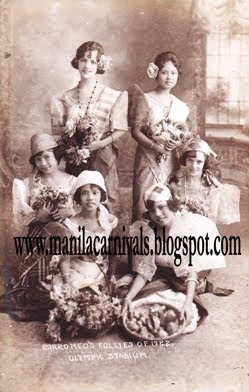 Under Borromeo Lou’s superb direction, his troupe dished out quality entertainment for the Carnival crowd, furnishing “the joy racket of the big show”, night after night.

“If you’re sick, come and be cured. If you’re going to die, come and have a good laugh first. If you’re well, come and help carry out the Jazzophobia victims”—so went Borromeo Lou’s call-to-action to Carnival visitors and revelers. His “bodabil” shows would thrive for the rest of the American occupation—staged in fiestas, petit fairs and theaters—and jumpstarting the careers of well-known artists as singer Katy de la Cruz, dancer Bayani Casimiro, and the Charlie Chaplin look-alike, Canuplin.
Posted by Alex D.R. Castro at 3:53 PM

Luis was the maternal grandfather of my composer husband, who was named after him -- John Louis Marvin, from White Salmon, Washington.