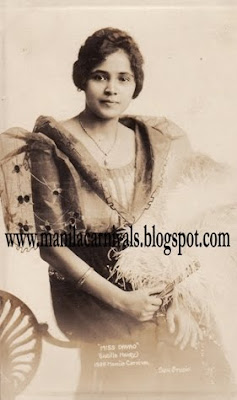 MAXEY-MUM IMPACT. Davao sent the lovely Lucille Maxey to the 1st National Beauty contest of 1926, of Fil-American parentage. Her father was a soldier, a member of the U.S. occupational forces who stayed on in Davao.
In the dual pageant of 1926, Davao sent a Filipino- American mestiza to the 1st National Beauty Contest by the name of Lucille Morales Maxey. Her parents were Melbourne Maxey and Regina Morales of Banganga, Davao.

Mr. Maxey was a member of the 1899 American occupational forces and like many of the soldiers, decided to stay in Davao, find a wife and raise a family. He quickly rose in rank, and held high positions in both the Philippine public school system and the provincial government. He became the School Supervisor in the east coast of Davao and later became a Deputy Governor of Zamboanga.